How Marketers Can Win the Great Emoji Arms Race

Brands Can Still Stand Out, but Only if They're Clever, and Sometimes Very Patient
READ THIS NEXT
YouTube CEO says the platform is ‘valuable’ for teens’ mental health 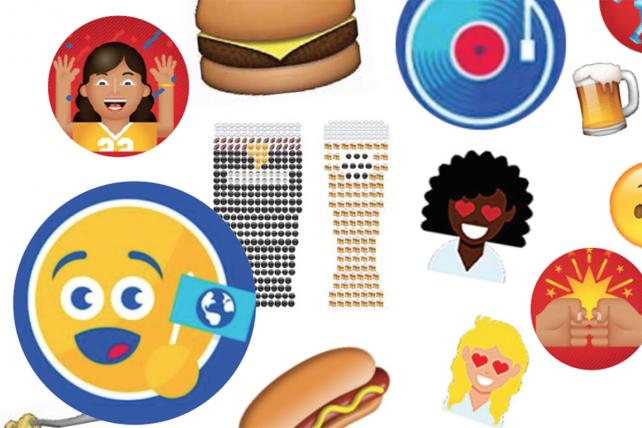 Editor's note: Hover over the hyperlinked text to see the emojis mentioned in the story.

In November, Elissa McGee was excited to text and tweet about the public opening of the Guinness Open Gate brewery in Dublin. But the Guinness senior brand manager soon realized a little social media snafu: There was no dark beer emoji for her to include in those messages.

There are well over 1,000 emojis on a standard smartphone keyboard, but the beer ones have a distinctly lighter hue. An update from the tech industry's Unicode Consortium in June will add some of the 79 candidates vying for a spot on the screen, with contenders including an avocado, a glass of milk and a smiley face wearing a cowboy hat. It will not include a dark beer emoji. Now Guinness is working to get " stoutmoji

" added in a later round. (There's no fee for marketers to try, just a detailed submission to complete.)

Guinness is "in it for the long game," Ms. McGee said. She knows going through Unicode rather than creating the brand's own keyboard could take years. That's fine. Emojis aren't going anywhere. Marketers are more likely to drown consumers in them first.

Well beyond the Dublin brewery, brands are eagerly using the popular little glyphs to connect with their fans and their targets, introducing campaigns across categories at a rapid clip.

"Great advertising has always kind of circumvented the rational parts of our brains by relying on visual images to conjure up emotions," said Kit Yarrow, author of "Decoding the New Consumer Mind" and a consumer psychologist. "It's a shorthand way to turn on emotions using visual stimuli, and it's just that the stimuli du jour is the emoji," she said.

" emojis, which come in a separate keyboard app users must download, won praise from people with wavy hair who wanted to represent themselves in their messages. Taco Bell's Change.org petition for a taco emoji

got more than 32,000 signatures. Unicode added a taco in 2015, but the consortium said petitions played no part in its selection. Eggo wanted waffle emojis, so it cooked up an Eggojis

Snaps, which developed the Dove keyboard for Unilever, said it was one of its most successful campaigns, with more than 928,000 downloads. Users shared an average of fewer than six pieces of Dove content, exceeding the Snaps network average of four.

keyboard, and began with football

. The keyboard and app go beyond standard sports emojis to include images such as a crying fan

and interceptions. Toyota has since added Nascar and basketball

, and plans to add other sports including baseball, soccer and hockey. The vast majority of the Fanmoji images have no Toyota tie-ins.

"We're not looking to get credit for a lot of this. It's almost like a gift," said Florence Drakton, Toyota's social media marketing manager. The Fanmojis have been downloaded several hundred thousand times, and Toyota is trying to keep them growing. It posted sponsored BuzzFeed content last month to remind people of the basketball

More campaigns are set to keep the momentum going. This summer, Pepsi will sell cans and bottles adorned with PepsiMoji

, which have their own Snaps keyboard.

But just using emojis is not enough to stand out anymore. As with other types of marketing, brands have to do things in unusual ways, Ms. Yarrow said. The bar on emoji marketing is a lot higher than even a year ago.

There's also some risk of emoji fatigue. Brands should monitor how much interest consumers have in other emoji-filled campaigns before embarking on one themselves, Ms. Yarrow said. "I think there's a little bit of room left," she said.

Flexibility and serendipity will play a role. Fooji arrived in June as a way to order various cuisines via emoji, for example, but not specific dishes. Consumers sent messages with emojis such as the chicken leg

, then waited for a $15 order to be delivered. After a strong initial response, consumers started wanting to make custom orders instead of playing "food roulette," recalled Fooji founder and CEO Gregg Morton.

Fooji changed its model in December to do promotions for brands, often, but not always, around food. Its pivot followed a request from Verizon to deliver cheeseburgers and fries to customers for the brand's "Why Not Wednesday" campaign. When Warner Bros. wanted to promote the February release of the movie "How to Be Single," it offered free pizza, Chinese food or even wine to people watching "The Bachelor" on Monday nights. Fooji delivered more than 13,000 meals to 47 states during that six-night program, Mr. Morton said. A promotion for the Fox show "Lucifer" encouraged fans to tweet the purple devil

, which led to deliveries of hot wings.

"Emojis are a great hook," said Mr. Morton. They aren't going to go away, he added. "But if they do, we have opportunities outside of emojis."