Google on Wednesday began its annual I/O developer conference with Sundar Pichai's first keynote as Google's CEO. More than 7,000 people gathered at the event in Mountain View, Calif., with others from 100 countries streaming it live. During the keynote, Mr. Pichai and Google executives unveiled a number of new products -- some of them that had already leaked -- that shows the company's ambitions in mobile, artificial intelligence, search, virtual reality and more. Here's a look at some of those new products that should be of interest to marketers.

Mr. Pichai opened the keynote in part with some mobile stats, including the fact that over 50% of the searches Google gets are made on mobile phones. More than 20% of those are made with voice search. It's no wonder, then, that the company announced a product it called just the Google assistant, a product that's been rumored for some time.

Referring to rival products such as Apple's Siri and Amazon's Alexa, Mr. Pichai promised that Google's virtual helper is "far ahead of what other assistants can do." Users standing near Chicago's "Cloud Gate" sculpture could ask their smartphone's assistant who designed it and get a quick answer, he said. (It's Anish Kapoor.) The assistant can also tell users what movies are playing nearby and buy tickets. It will be incorporated into Google Home, the company's new voice-controlled device for the home, but work across other devices as well.

The company is hoping developers will create services for its assistant that help consumers buy marketers' products, the way people can use Alexa to order an Uber or a Domino's pizza. 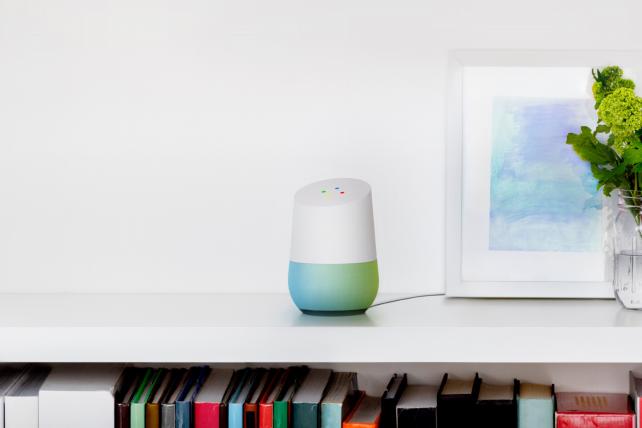 The aforementioned Google Home is its answer to Amazon's Echo. It can help consumers manage various tasks, listen to music or podcasts, adjust volume on speakers in various rooms, search on Google and control smart home-enabled devices like Google's Nest products. The company said that eventually people will be able to order food, cars, flowers and other products by talking to the product.

The key differentiator for Home is its search prowess, according to Google, enabling it to answer questions for people that many other assistants have trouble answering. 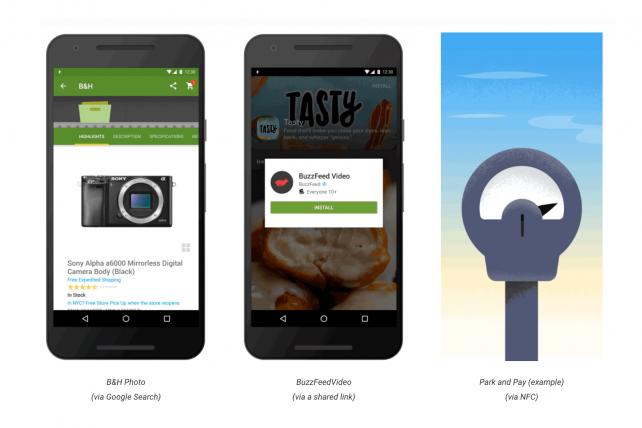 It's been said countless times that people use apps on their phones far more than the mobile web. But Google announced a way for users to access certain parts of apps without even having to download them: Android Instant Apps. In short, a tap on a URL can open in an Android app, even if that person doesn't have the app installed.

It's basically a deep-linking technology, and Google says it won't require developers to build new apps. Developers use a source code from Google that allows them to open specific content within their apps via links. It's available only on Android for now.

The move could help app creators attract people to their apps who might not otherwise downloaded them -- potentially helping marketers that haven't achieved wide downloads but have desirable products and services to offer. The scheme might help Google improve the mobile web, an important part of Google's mobile playbook. And if marketers experience significant engagement as a result of the program, they may be more inclined to focus on mobile web search, where Google is strong. Google tested Instant Apps with a couple partners, including Buzzfeed, Hotel Tonight and retailer B&H.

Developers have typically designed campaigns to expose their apps to as many people as possible. But there's often a need to be more targeted than that, said Sissie Hsiao, product management director for mobile app ads at Google. Chasing volume is useful when an app is new or entering a new market, she added, but developers are increasingly looking for more valuable or engaged users, or users that tend to use apps for certain purposes. Developers can target users who have been more engaged with apps, achieved certain difficulty levels in games, or performed actions like booking a hotel via other apps. Google also announced it was opening Universal App Campaigns, previously available only to promote Android apps, to include iOS apps for Apple.

Google said it had driven more than 2 billion app downloads thanks in large part to Universal App Campaigns, which it introduced last year.

The company also introduced Firebase Analytics, a unified attribution and analytics platform that it said would make it easier for developers to track progress of app-install campaigns, various data and consumer behavior. 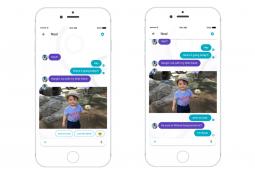 Messaging apps have become a place where hundreds of millions of consumers exchange messages with friends and family, but also increasingly interact with brands. Facebook has laid out grand ambitions for Messenger and M, its virtual assistant, which can help people book airline tickets, order flowers, and a number of other actions via bots. Though news of Google's new messaging app leaked months ago, the company on Wednesday confirmed those plans with the introduction of Allo. It works like any other messaging app in that you can interact with other people. But Google touted Allo's ability to actually carry on a conversation, thanks to machine learning and artificial intelligence, as a key differentiator.

The app will provide increasingly sophisticated replies over time, according to Google, which said it would learn as users have more conversations with it.

"Allo uses machine learning to suggest replies on the fly, anticipating what you might want to say next," said Erik Kar, a Google executive. "These aren't just canned replies. Allo learns over time."

Like most other messaging apps, Allo offers virtual stickers, along with a feature called Whisper/Shout that's basically a range of font sizes. It also includes Smart Replies, a feature already available in the Google Inbox app that suggests potential replies.

Google didn't say what this means for other messaging products like its native messaging app on Android or Hangouts. It also wasn't immediately clear what kind of ad formats might pop up on the app. And the company surely faces stiff competition in the space, given the popularity of apps like Messenger, Facebook's WhatsApp, WeChat, Viber, Kik and its own Hangouts, not to mention Snapchat. Once people and their friends commit to a messaging app, it's hard to get them to move.

But marketers are very interested in the potential of messaging apps to connect them more intimately and directly with consumers, including though automated bots.

Marketers are still trying to figure out virtual reality and how it best fits into their programs. In terms of viewers, Google already has Cardboard, a cheap alternative to higher end products like Oculus. But Google has now unveiled Daydream, and while it's a step up from Cardboard, it's still a lower-end play than its competitors that relies on a mobile phone for the bulk of the heavy lifting. Google said it doesn't plan to sell Daydream directly, but will make the design available to hardware makers to make and sell themselves.

YouTube on Thursday announced a VR app for Daydream. "We're creating the YouTube VR app to provide an easier, more immersive way to find and experience virtual reality content on YouTube," it said in a blog post. "It also comes with all the YouTube features you already love, like voice search, discovery, and playlists, all personalized for you, so you can experience the world's largest collection of VR videos in a whole new way."