Honeymoon's Over For Apple's iTunes Radio -- What's Next For Advertisers? | Ad Age
Skip to main content
Sign In Register

Honeymoon's Over For Apple's iTunes Radio -- What's Next For Advertisers?

ITunes Radio's first wave of advertisers have been pleased with the streaming music service since its September launch, but Apple's digital radio product hasn't checked every item on their wish lists, like more granular ad-targeting options than the standard parameters like age, gender and zip code. And prospective media buyers await proof that iTunes Radio is noise-canceling competitive services like the more sizeable Pandora. 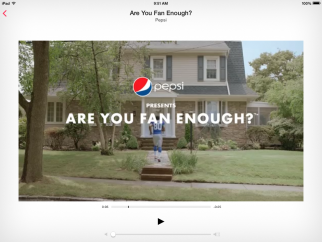 "The results so far are right on target," said Ben Winkler, chief digital officer at OMD, whose clients include iTunes Radio launch advertisers Pepsi and Nissan. Mr. Winkler declined to delve into specific results, but said iTunes Radio advertisers were reaching more people on their mobile devices than originally anticipated.

"We thought it would be a good chunk from mobile. When we first put [campaigns] together, I don't think we expected two-thirds [of users] from mobile. By the time this thing rolled out, two-thirds felt right," he said.

Apple was also able to satisfy demand for its handful of category-exclusive launch advertisers, which included McDonald's and Procter & Gamble. "We were able to reach the impression loads that we had targeted to reach, and that's with protections like not overloading any individual with too many ads...which would suggest that their growth was good," said Nissan Director and Chief Marketing Manager Phil O'Connor.

That growth trajectory will need to continue in 2014. Next year the honeymoon period for iTunes Radio will have ended. Many launch advertisers' deals only ran through the end of 2013. The service will retain Pepsi, which signed a two-year deal, but others like Nissan await their companies' next fiscal-year planning decisions before weighing whether to re-up. New advertisers are likely but not guaranteed.

Marketers have "significant interest" in iTunes Radio "because anything Apple does, they tend to do in a big way," said DigitasLBi Senior VP-Media Adam Shlachter. Apple has indicated it plans to more aggressively court Madison Avenue and emphasize iTunes Radio in particular. Since iTunes Radio started rolling out, conversations with media buyers concerning non-iTunes Radio iAds have been down, said one agency executive. And earlier this month Michael Pallad, VP-sales at AM/FM radio giant Cumulus Media, joined the company's iAd team to sell iTunes Radio internationally.

Mr. Pallad will need to sell marketers not only on iTunes Radio but off the competition. Given how crowded the digital-music marketplace is, "everyone is waiting to see what their impact is against the competition, whether or not Apple can establish or take share from any other platform. Based on that you will see people migrate budget," Mr. Shlachter said. 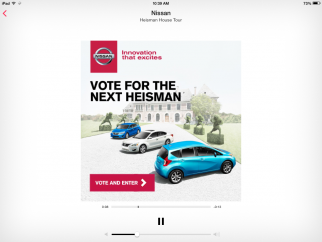 ITunes Radio received a leg-up thanks to Apple's built-in customer base and product pedigree. Still the service must play catch-up to Pandora, Clear Channel's iHeartRadio and Spotify as well as keep ahead of forthcoming music services like Beats Music and YouTube's music app.

Apple may be a latecomer, but advertising-wise iTunes Radio stands to benefit from its predecessors' past experiences. For example, Apple is working with an unnamed third-party company to validate ad impression loads. That is on par with how AM/FM radio is bought. And as is the case for Pandora and Spotify, improved ad targeting is said to be a priority for iTunes Radio in 2014.

As for audience growth, Mr. Winkler pointed out that iTunes Radio accrued that first month's 20 million users "with zero promotion. On the scale side, I'm excited about what happens to the numbers when the service is genuinely promoted from an advertising perspective."