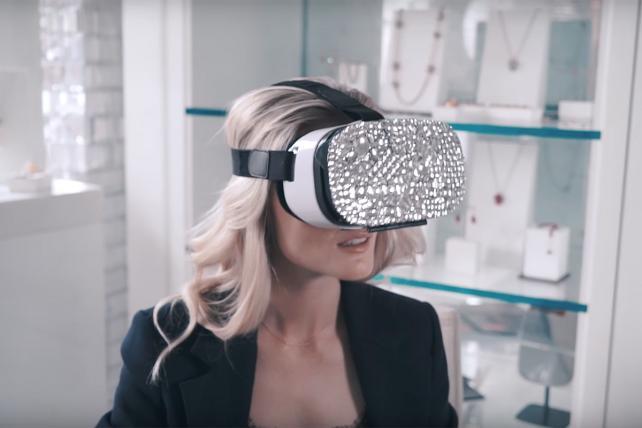 MasterCard and Swarovski claim they are the first to make virtual commerce a reality.

Retailers like Lowes and Ikea have created virtual showrooms where consumers can browse goods while wearing VR headsets, but shoppers can't buy products while in the VR experience. Instead, items are added to a shopping cart to be purchased later on a different device.

Swarovski borrows much from Lowes and Ikea, as its VR shoppers walk around a high-end home and interact with various crystals from the retailer's Atelier collection (see video below). Engaging with a product also provides details about it, such as price and the option to check out right then and there with Mastercard's MasterPass.

"The average time users spend on visits is nine minutes," said Abi Mandelbaum, CEO and co-founder of YouVisit, which powered the option to check out in VR for Mastercard. "If you can get someone to engage with you for nine minutes, why do you want them to go somewhere else to complete the purchase?"

Swarovski plans to have VR headsets at certain retail locations as well as different events.

Luxury brands and apparel have the greatest potential to succeed with virtual commerce, according to Mandelbaum. But can virtual reality really help sell a $2,000 crystal bowl? Some in the Swarovski Atelier collection can run from $600 to as much as $2,700. Mandelbaum says they will.

"Everything is an evolution," Mandelbaum says. "Just like it was 20 years ago, when there weren't many people buying things online. Because of the [VR] experience related to it, this applies well to luxury goods, apparel, furniture -- anything that is design related."

"The closer you can get to feeling like you're actually shopping, the more likely it will translate to an actual experience," he added.

Michael Miraflor, senior VP of futures and innovation at Blue 449, says context is key. "This especially applies to luxury goods," he says. "It matters how the object looks around your neck, on your wrist, or, in Swarovski's case, on a credenza or coffee table."

Mandelbaum says he's already working with another retailer to roll out the option to checkout in VR, but declined to name the company, saying only that it's "a major footwear brand."

Still, virtual commerce has the noticeable hurdle of consumer adoption: 42% of U.S. online adults have never heard about VR headsets and an additional 46% said they don't see a use for VR in their lives, according to a report by Forrester Research. And only 8% of marketers are using VR in their ad campaigns.

"Given the huge level of disruption Mastercard has been facing the payment space over the past few years, it makes sense for the company to test new platforms early and to be ready for when new technologies like VR will scale," says Thomas Husson, VP principal analyst at Forrester. "It is still very early days for VR and the audience is absolutely niche today … we are very far from making this a reality."

Kiki del Valle, senior VP of commerce for Mastercard, says it's hard to predict where virtual commerce will have the most success, but said that Swarovski may have found something, given how costly it is to produce its high-end crystals.

"By bringing consumers to the virtual showroom, Swarovski has created a contextually relevant and environmentally responsible solution that has a positive impact on the bottom line," she said. "It's not the most glamorous way to look at VR, but it is a great example of where innovation and strategy can align to create real value."