Why McDonald's Canada Social-Media Success Worked for the U.S.

Borderless Nature of Web Gives Video Responses Campaign Visibility South of the Border
READ THIS NEXT
With cookies on the way out, brands search for solutions

Arguably McDonald's biggest social-media success has come from the burger chain's Canadian division -- but the one of the biggest beneficiaries has been the U.S., thanks to the borderless nature of the web.

McDonald's, which has over the past few months tapped social media to tell a story of transparency and food quality, has seen success and stumbles. But one of the biggest triumphs has come from McDonald's Canada, which has released a series of videos answering consumer questions about the food, from why a real-life burger looks different than the one in the ads to how to make the Big Mac's special sauce. The effort has drawn praise among marketing experts and generated millions of video views, landing it on Ad Age 's Viral Video Chart. 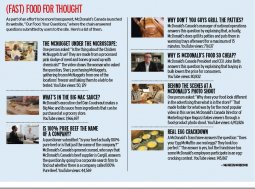 Click to view questions answered on "Our Food. Your Questions."

That platform, "Our Food. Your Questions," is a website that allows customers to submit queries to McDonald's Canada, which answers some of them with videos. One was a behind-the-scenes look at a photo shoot for one of the chain's burgers; another featured McDonald's executive chef Dan Coudreaut in a cooking-show-style format showing viewers how to make a Big Mac and its special sauce at home.

"We knew from research that Canadian customers had questions," said Karin Campbell, senior manager of external communications at McDonald's Canada. "We certainly could see pervasive myths out there, so we decided to take on those myths head-on and just clarify some of the info by developing a platform."

Ms. Campbell said that McDonald's typically tries to respond on its website within two days, but in the cases of the videos, there's a longer response time. Seven videos have been created so far.

Despite the program's success, McDonald's USA hasn't released similar videos -- perhaps because it doesn't need to. Indeed, the photo-shoot video has attracted more than 6.9 million views on YouTube, the top viewing location was the U.S.; Canada didn't even register in the top three on the locations list.

"What's been interesting is the borderless [nature] of social media. ... The way that social media is , each area of the world [McDonald's is in] is able to launch something and other areas can benefit," said Heather Oldani, senior director-external communications for McDonald's USA.

The Big Mac video, meanwhile, had more than 1.9 million views on YouTube, and McDonald's had no paid media behind any of the videos.

Not all of McDonald's recent programs have gone as swimmingly. McDonald's USA ran into trouble in January after it rolled out Twitter campaign #McDStories, part of its Supplier Stories push featuring some of McDonald's secondary produce and beef suppliers. It encouraged Twitter users to use the hashtag to share positive stories about McDonald's, but instead some hijacked it to tell gross tales about the chain and its food.

So what made one campaign work and the other backfire?

Stuart Schwartzapfel, VP-audience insights at social-media agency Big Fuel, suggests that marketers employ a more middle-of -the-road approach to social media. Rather than open the floodgates with an easily hijacked hashtag, provide ready-made content that users can share. In the case of McDonald's Canada, the content was not polarizing -- rather than focusing on the broad statements of how healthy or organic the food is , it focused on specific processes related to the product.

In other words, McDonald's Canada's campaign worked in part because it didn't give consumers too many opportunities to trash it, and it stayed away from potentially touchy issues.

Mr. Schwartzapfel warned, however, that too much control is not a "better practice." McDonald's Canada did not allow users to comment on the YouTube pages, which he said "implies dubious intentions," as it gives users no space to talk to the brand.

As for what's next for McDonald's USA, Ms. Oldani said that it's still too early to say, but that the chain will likely have new executions surrounding food quality and nutrition in the future.