How McDonalds, Pepsi, Burberry Are Going Big on China's WeChat

Brands are still trying to figure out how to leverage WeChat, the 3-year-old social app that changed the way Chinese consumers use their smartphones. Anyone looking for ideas might check out what Burberry, Pepsi and McDonald's are up to.

The British luxury brand just took WeChat fans behind the scenes at its London runway show, offering them audio commentary by the creative team and Chinese celebrities. When fans sent Burberry a text message, the brand instantly responded with a virtual plaque engraved with their name.

WeChat is good for such one-on-one interactions -- conversations between a consumer and a brand – because it's a pumped-up messaging app. Inspired by WhatsApp, it took the concept much further, blending in elements of Facebook and Instagram. WeChat's parent company, Tencent, just bought 20% of Dianping, China's Yelp. And WeChat is poised to make an e-commerce push, too.

The app, called Weixin in Chinese, had 272 million active monthly users when the latest figures were released in November, and its growing popularity in markets like Brazil gives it extra appeal for Burberry.

And yet many brands are still struggling with it: A Forrester Research report proclaimed that "WeChat is not a good marketing tool – yet."

In part, Forrester said, that's because WeChat strictly limits how and how often brands can communicate with users.

So brands have to make every message count. 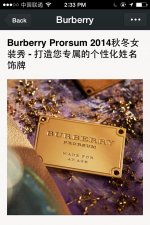 A customized plaque from Burberry

WeChat says it's partnering with Burberry, a digital innovator that has worked with Apple, Google and Instagram, to develop content and improve storytelling. Both share the goal of "building word of mouth organically instead of pushing," said Sophia Ong, the Tencent executive who helps marketers navigate the internet giant's platforms.

She added: "Chinese consumers, especially those who were born after the 1980s and are looking at luxury brands, have a high demand for customized and personalized products and experiences."

So while WeChat offers up potential for innovating on personalization and social CRM, it's rewriting the rules for marketers accustomed to using Sina Weibo (the "Chinese Twitter") to push out viral content on a mass scale.

WeChat and its relative privacy are luring traffic away from Weibo, which is suffering because of a government crackdown on influential microbloggers. Many people also complain it's now overrun by brand messages, something WeChat is trying to avoid.

Weibo is "no longer driving the cultural and social agenda," said Bill Bishop, the publisher of Sinocism, an influential newsletter on China.

Marketers that have relied on Weibo to build brands, monitor public opinion and do crisis management "now have to figure out WeChat, a whole new, much more difficult-to-mine social media platform," he said. (Another tricky issue: Monitoring services can keep tabs on Weibo easily because it's so open, but since WeChat conversations are private, "your product can be trashed across group chats and nobody will have any idea," Mr. Bishop noted.)

Challenges aside, here's a look at a few buzzed-about campaigns by marketers using the platform successfully.

People used WeChat to record an audio message that would get mixed in with a soundtrack of the well-known "Bring Happiness Home" theme song.

"You could also add in effects like the sound of a train, and say, 'Mom, I'm on my way home,'" said Tim Cheng, chief creative officer of DDB Group Shanghai, which created the campaign. Another sound offer was a horse's gallop, since it's the Year of the Horse. (WeChat is big on audio messaging – many Chinese people prefer that to texting because typing in characters is time-consuming.)

The brand message, coming mostly from the theme song, was subtle.

"It's about spreading happiness, as opposed to 'buy Pepsi,'" Mr. Cheng said.

The fast food brand sponsored a contest asking people to record a "Big Mac Rap" in the style of the host of the hit singing show "The Voice of China." MC Hua Shao's monologues – reminiscent of auctioneer-speak, with quick staccato syllables – have inspired online chatter and countless spoofs.

As China-based branding agency Labbrand points out, uploading the audio on WeChat is simple, and the app opens up possibilities of user-generated content on a mass scale.

WeChat
The most ingenious, and viral, Chinese social marketing campaign lately came from WeChat itself.

As WeChat moves into e-commerce and prepares to challenge China's online shopping giant Alibaba, it needs people to plug their bank numbers into its payment service, Tenpay.

So it offered an updated take on another lunar new year tradition: exchanging cash-stuffed "red envelopes," or hongbao, as gifts.

WeChat digitized the tradition and created a gambling-like game where users sent money to a group of friends, with sums randomly distributed among them.

The feature was a smash hit at family gatherings, in offices and online, and 20 million envelopes reportedly changed hands.