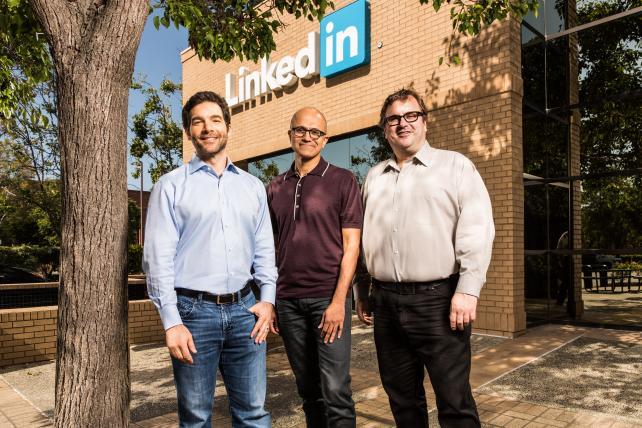 Microsoft Corp. said Monday that it will buy LinkedIn Corp. in a deal valued at $26.2 billion.

The deal, in which Microsoft will pay $196 per share in an all-cash transaction, is a 49.5% premium to LinkedIn's closing price on Friday.

LinkedIn will retain its brand, culture and independence and Jeff Weiner will remain CEO of the company, Microsoft said in a statement Monday. Mr. Weiner will now report to Microsoft CEO Satya Nadella.

The surprise deal punctuates a dramatic first half of the year for LinkedIn. First-quarter revenue from its Talent Solutions business, the company's main moneymaker, rose 41% to $558 million as the company sought out large corporate customers that pay to track down potential job candidates. That contributed to first-quarter earnings that topped expectations by a wide margin and allowed the company to raise its full-year revenue guidance to $3.65 billion to $3.70 billion, from an earlier range of $3.6 billion to $3.65 billion.

The company said a redesign of its mobile apps encouraged people to spend more time on the service.

Earlier this year, LinkedIn said it miscalculated some strategic moves and that the company would grow more slowly than expected, forcing some analysts to reconsider their positive opinions on the stock.

In February, LinkedIn abandoned its 12-month-old ad network letting marketers reach users around the web using criteria such as VPs of sales in financial services in the New York area. The product followed similar initiatives from Google and Facebook, and received "solid" demand, but wound up requiring "more resources than anticipated," LinkedIn said as it returned to selling ads only within its walled garden.

A few weeks later, the company improved marketers' ability to easily target LinkedIn users, expanding the number of companies whose employees could be reached to 30,000 companies from 100 and making the process less manual.

The company makes 39% of its revenue outside the U.S., and it's a rare American social network operating in China. The company said it has 20 million users in the country, up from 10 million in July. That excludes users of a local-language app it created called Chitu.

"We started by localizing the global platform, and we have seen strong growth in terms of new members," Mr. Weiner said in April, referring to LinkedIn's presence in China. "As we continue to grow membership, we are increasingly turning attention to engagements. Once that reaches critical mass, we will focus on modernization."