Microsoft has agreed to buy Nokia's mobile phone and services business for $7.2 billion in an effort to catch up in the booming mobile space, the companies said. The deal is expected to close in early 2014. 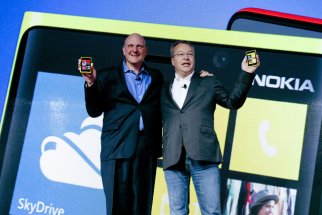 Global marketing will be integrated under two Microsoft executives -- Tami Reller, exec VP-marketing, and Mark Penn, exec VP-advertising and strategy. Microsoft said it intends to license the Nokia brand to use with existing Nokia products but did not describe its plans for the name going forward. "It is very important that we pursue a unified brand strategy as soon as possible," Microsoft CEO Steve Ballmer said in a statement.

At the companies' announcement of the deal, Nokia's chairman, Risto Siilasmaa, called the deal rationally clear but emotionally complicated. "Rationally it is clear that the smartphone market is undergoing fundamental change, and in this dynamic market Nokia has done great work in creating innovative products," he said. "However, the industry is becoming a duopoly, with the leaders building significant financial momentum at a scale not seen before."

The deal will catapult Microsoft forward in the mobile market. Despite great efforts and much ad spending around mobile devices running Windows software, the computing giant has been left behind as consumers move away from desktops and laptops into tablets and smartphones.

Mr Ballmer called the deal a "signature event" in Microsoft's "transformation." Microsoft first teamed up with Nokia in 2011 when Nokia ditched the Symbian operating system for Microsoft's Windows software for its smartphones.

Finnish company Nokia was the first big mobile phone brand, but failed to keep up with competition from Samsung and Apple as smartphones began to dominate the market.

According to Gartner Research, Nokia's overall mobile phone sales totaled 61 million units in the second quarter of 2013, down from 83 million units a year ago. In the same period, however, Nokia's leading smartphone, the Lumia, grew sales by 112.7%.

Gartner puts Nokia as the second biggest mobile phone company in terms of sales for the second quarter of 2013, with 19.9% share of the market, behind Samsung's 21.5% share. Apple is third with 6.9%.

Mr. Ballmer announced last week that he would be retiring within the next 12 months. Nokia CEO Stephen Elop, who moved from Microsoft to Nokia in 2010, will return to Microsoft after the acquisition is complete, putting him in position to contend for the CEO spot there. Mr. Siilasmaa, the Nokia chairman, will take on interim CEO duties.

Other Nokia executives moving to Microsoft include Chris Weber, exec VP-sales and marketing; Marko Ahtisaari, exec VP-design; and Jo Harlow, exec VP-smart devices. In total, about 32,000 Nokia employees will transfer to Microsoft once the deal has been completed.

Once the deal, which will need is approval from regulators and Nokia shareholders, is finalized, Nokia will concentrate on three remaining businesses -- network equipment manufacturing, mapping and location services, and the development and licensing of technology. Nokia shares, listed on the Helsinki Stock Exchange, soared by 45% on announcement of the deal.