Microsoft Spends $1B on Operating-System Launch, But Are Ads Windows-Washing? | Ad Age
Skip to main content
Sign In Register

Microsoft Spends $1B on Operating-System Launch, But Are Ads Windows-Washing?

Microsoft is pouring more than $1 billion into marketing its shiny new operating system around the world, but some tech watchers think much of that massive budget is going right out the window. 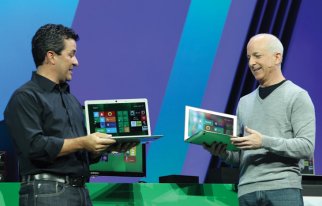 By most accounts, using Windows 8 -- which is so unlike any of its predecessors that it doesn't even have a start button -- will require buyer education. Yet initial TV ads for the product ignore the issue and instead position Windows 8 as a cool lifestyle product. Analysts like Forrester's Frank Gillett think that strategy could backfire when consumers become frustrated trying to do the awesome things that look so easy in the ads.

"They're going to have to do much more to explain it," he said. So far, Microsoft's "marketing seems to be in denial that they're moving everyone's cheese in a dramatic way. Why can't they say something like "Be patient with us, we're taking you to a better place' ? It should have more of that tone."

Neither Microsoft nor the agency charged with core concept development in the U.S., CP&B, would discuss the campaign. (JWT did the ads in China and Brazil, and Wunderman acted as the "hub of localization.") But on Microsoft's corporate blog, CP&B Chief Creative Officer Rob Reilly wrote, "We focused on the experiences that new Windows 8 will give all of us. And we didn't get too literal. It's not about landing features and scenarios. It's about themes like sharing and staying connected, working together and sharing together and expressing yourself."

But getting to the sharing and expressing will take some doing, which may be why Microsoft is avoiding the take-your-medicine approach. "The marketing requirement is substantially above anything they've done before, and I'd argue substantially above anything that Apple's done," said Rob Enderle of Enderle Group. "They're going to have to get consumers to see the differences as trendy and cool, not something they have to get over."

Key will be in-store education. "You can't address [the learning curve] in a 30-second TV ad or print ad. The best place to address that is in the store or with online tutorials. And Microsoft is definitely being more aggressive about helping to merchandise products and [having] more presence in stores helping people," said NPD Group analyst Steve Baker, who added that the ads frame the system as cool to drive people into stores.

Just how steep the learning curve is comes down to individual perspective. "The new technology and the new possibilities and the new approach I think outweigh any of the confusion it ultimately brings with it," said Robert Passikoff, president of Brand Keys. "If you want to do something new, you have to stop doing something old."

Others are not so sure. "I find Microsoft executives remarkably dismissive about this," Forrester's Mr. Gillett said. When asked during Microsoft's earnings call Oct. 18 if there is confusion about the "adjustment that users will have to make," Chief Financial Officer Peter Klein said, "Not a lot. I hear the feedback, and as a user we've sort of gotten used to it very quickly."

Noted Mr. Gillett: "They don't want to really talk about it, but I'm not the only one out there saying this looks like it could be a trainwreck if they're not careful."