What Men's Health Has Learned From 50,000 IPhone App Downloads

Matt Bean, brand editor at the publication, has been spearheading the push, and he talked at the Ad Age and Appolicious Apps for Brands event about some basic things publishers should be thinking about when moving into the space. 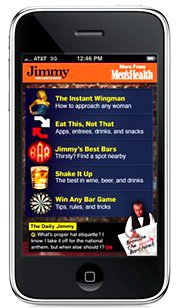 With the Jimmy the Bartender app, you can submit your own drink recipes for other users to rate.
Ad Age: What kinds of unique challenges do publishers have when it comes to creating apps?

Mr. Bean: One of our challenges is finding ways for our content to appeal to a wider audience. Apps users are not a one-to-one map of Men's Health magazine subscribers. We have 11 million readers, but if you narrow that down to the number of people who have an iPhone and narrow that down again to the number of users that want to pay $2.99 for a Jimmy the Bartender app, it's not a viable business position. So you have to find a way for those key franchises to appeal to different users.

Ad Age: You have said that there are things that work in print or online that don't necessarily work for mobile. How do you guys brainstorm new concepts for mobile? What's your process for this?

Mr. Bean: It's not a free-for-all, but a lot of the ideas come from using other applications and just being familiar with our content. I've encouraged the entire staff to send me ideas, but often we come up with new ones while designing other apps. You realize, "Oh, we can do this in the Jimmy the Bartender [app], maybe we can do this in the Smoothie Selector [app]."

For example, we have about 70 drink recipes in Jimmy the Bartender, and we wanted users to be able to submit their own drink recipes as well. So now they can take a photograph, they can list the ingredients, it goes to a staging server, and then we can push it live to the site, and other users can rate it. So that kind of user-created content will make its way into other apps like the Smoothie Selector. It's not until you get under the hood in some of these applications that you understand what they're capable of.

Ad Age: Your editors and writers also have print and the web to work on. How do you get them to create content for mobile?

Mr. Bean: In some cases we have archives of content, but there's still a process of formatting that content and making it fit into an application. But some of the content is brand new content. So for me, the challenge has been finding time with the editorial staff to use key people on staff who have an expertise in a particular field to contribute to this fly-by-night operation on the side.

It's difficult when we're trying to close the November issue to find somebody to churn out 70 drink recipes. But there's such a passion about what we're doing now. One of my chief staff members helped me put together a random but seamless photo backdrop with stuff he bought for $37 at a craft store to photograph all of our smoothies over the course of two days, just because it was an exciting thing to do. It's one of the advantages we have. People are excited for this stuff. They don't mind a little extra work if it means, at the end of the day, they'll have something cool like an app in their hand they can show off to their friends.

Ad Age: Will apps be a revenue-producing line item going forward for you guys?

Mr. Bean: Absolutely. We don't currently have any agreements with advertisers, but the way to approach it is not to sit there on the sidelines and wait until an advertiser says to you, "Hey do you have an iPhone platform?" We need to be out there and showing what we're able to do, both from a content perspective and a technology perspective. Then those discussions with advertisers don't have to take place in the abstract. You can whip out a handset and say, "Look what we've made. Here's how we can connect your brand to our audience."

Ad Age: You have to be careful about adding advertising to your paid apps, right?

Mr. Bean: I don't currently have any plans to release a paid app that also includes advertising. I have the [$5] ESPN fantasy app, and it has a Bud Light ad in it. I don't particularly mind, but some people are absolutely vitriolic in the forums about it. I'm not comfortable with doing that at this point. I believe there's a light platform that can be established that does present sponsor information in an entertaining fashion without making anyone feel cheated.