Gas stations, retailers and restaurants would love to have a better handle on the size and scope of the market they could reach but don't. To do that, some are experimenting with a new technology that tracks consumers through their mobile devices and aims discounts and offers to their phones.

Sunoco, Phillips66 and Marathon filling stations in Indiana, Michigan and Ohio and a handful of shopping centers in Florida are among early testers of the iSign mobile technology, which lets retailers and restaurant operators measure the number of people who pass by their establishments and track responses to targeted discounts sent to mobile phones.

The technology uses antennas installed in business locations that detect WiFi or Bluetooth signals from mobile devices up to 300 feet away. The system currently detects around 1.5 million phones each month, according to Alex Romanov, founder and CEO of iSign Media.

"It's continually searching for mobile devices to advertise to," said Ron Leman, president and CEO of Graphic Media, which has exclusive rights to market the iSign technology in Indiana and Ohio. "We can tell you by the hour how many devices are in range of the antenna."

Getting them in the door
Mr. Leman's mission is to get the technology placed in 10,000 stores by 2016. Today, they're in around 200 Sunoco, Phillips66, Clark and Marathon gas stations. Graphic Media and iSign previously conducted tests in 15 stations, sending people offers for 10 cents off per gallon of gas if they paid inside adjacent convenience stores. The idea was to capture more cash from them than they would have spent if they paid at the pump.

"Their challenge is this they have a lot of patrons that come, fuel up, pay with their credit card and leave, and never come in the store," said Mr. Leman. 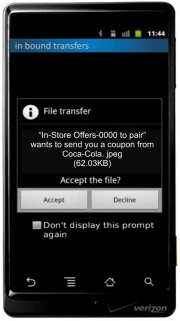 The iSign tech is also at work in three Florida shopping areas, on Main Streets in Safety Harbor and Dunedin, and at Shoppes at Boot Ranch Outdoor Mall in Clearwater. A small restaurant chain also is planning to launch a test of the system, according to Mr. Leman, who could not name the chain publicly.

Gas stations already use promos in traditional and digital signage at the pump to lure people into their stores. So, why use a mobile technology that some consumers could consider intrusive? Mr. Leman argued that people prefer communications via their mobile devices, and are more responsive to them than in other channels.

Wealth of data
He also argued the measurement capabilities make the technology compelling for marketers.

"Because of the data, [marketers have] the ability to monitor what [they're] pushing out and…what their response rate is," he said. "You're collecting information about your consumer and what they like and dislike."

The iSign system collects and stores data showing the Media Access Control address, which is a mobile-device identifying serial number, along with the make and model of devices that are picked up by the iSign antennas. It also collects data showing which offers consumers redeem. If a device owner does not take advantage of the offer or interact in some way, the MAC address is purged from the iSign database "within days," said Mr. Romanov.

The system, therefore, can spot a previously-detected device which could influence the type of offer sent to that consumer. However, if someone did not respond to an offer, he still could be sent another message in the future through the system, even from the same location.

Hurdles
Consumers must have Bluetooth or WiFi enabled in order to receive messages from iSign. So companies using iSign have an incentive to notify consumers to enable their Bluetooth or WiFi connections. For instance, a campaign from Mac's Convenience Stores in Canada prompted mobile device users to download a coupon for Coca-Cola. Digital signs suggested that customers enable Bluetooth to receive the offer.

There's no requirement for businesses using the technology to notify consumers of its use, and there is no simple way to opt-out from receiving future messages through iSign. To opt-out, a consumer would have to request an opt-out from someone at the place of business, and provide her MAC address, which supposedly would be given to iSign, which would ensure that the device would no longer receive its messages. The company stresses it cannot track the devices once they are away from iSign antennas.

"To my knowledge there's never been one complaint from a consumer [about iSign]," said Mr. Leman.