Overlooking the User Could Lead to Big Problems, Mozilla Execs Say
READ THIS NEXT
HomeGoods, after opening 820 stores, finally launches a website

Mozilla has a message for the advertising industry: Start respecting the user or face a backlash.

The technology company best known for its Firefox web browser is starting to sell ads of its own, and it doesn't like what it's seeing.

"You see all these things about optimization and data and about real time and all the chatter about brands wanting to own their users and the technology that has helped the process -- but nowhere in these halls, or very little, have we heard anything about putting the user first." said Darren Herman, Mozilla VP content services, in a conversation which began at DMexco and carried through Advertising Week earlier this month. 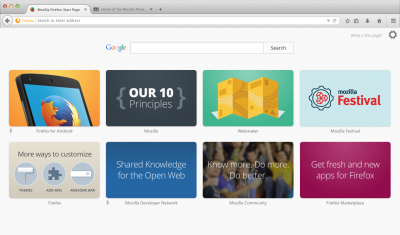 The proposed ad unit would run on new-tab pages.

Mozilla is in the process of introducing two forms of advertising into its browser. The first is called "directory tiles," where the company will sell advertisers a tile on the new-tab page of newly installed browsers. The second is called "enhanced tiles" which lets publishers and brands pay to customize their tile when it shows up in a "most visited" tile on the browser's new-tab page. Enhanced tiles will be available across Mozilla's entire install base.

The ads, with potential to reach Mozilla's hundreds of millions of users, are unlike nearly every ad placement on the internet: there are no cookies, no third-party ad servers, no brand pixels and users can opt out of seeing them altogether.

"We're not using cookies and we're also trying to respect the user in terms of what they're looking for and to provide them content that's interesting to them," said Mozilla Senior-VP Business and Legal Affairs Denelle Dixon-Thayer. "We really are trying to let them own the environment."

On its own, Mozilla does not have a realistic chance of compelling the ad industry to give up its existing methods. But it is hoping to set an example.

"If it works, and we think it does, that's a pretty great path for others to look at and go 'Okay this could work, but what could I do?'" said Ms. Dixon-Thayer. "Innovate, create, you don't have to copy this. You guys know this space a lot better than we do, go create, go figure it out."

Mozilla is a non-profit, so it's easier for it to make these changes than a company reporting quarterly earnings, but Ms. Dixon-Thayer said it's in the industry's interest to follow Mozilla's lead. "If we don't give [users] the choice, that data is going to be pulled from the market," she said. "They're going to say, 'I'm going to get some kind of an ad blocker or some kind of technology in there that can help me to protect my data,' and that's what we need to be afraid of."

Asked for a concrete example of how the industry can do a better job, Mr. Herman said companies should "let users know what you are doing, why you're doing it, how they can opt in or out, and overall, respect them." He also said Mozilla will continue pushing for Do Not Track to be implemented.

Mozilla famously said last year it would block third-party cookie collection unless users opted in. The move strained its relationship with an advertising industry largely dependent on such collection. But such action appears to be far off, if it will happen at all. "We see that there are potential issues with it -- false positives, false negatives," said Ms. Dixon-Thayer. "Third-party cookies, it's the same as it is today."