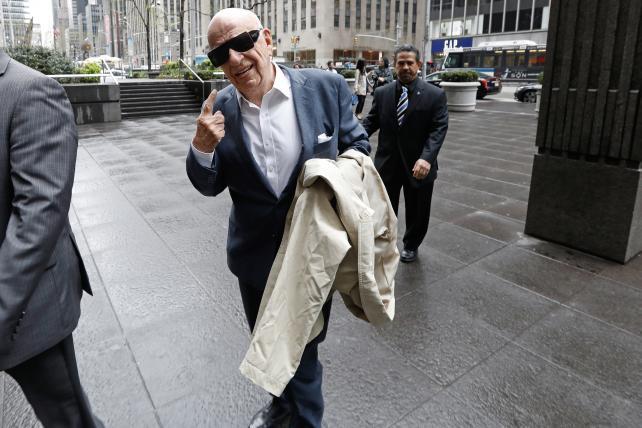 Rupert Murdoch, whose News Corp. has been critical of tech giants recently and going back for years.
Credit: Peter Foley/Bloomberg

Rupert Murdoch is hoping that Google's pain might be his gain.

Murdoch's News Corp. is introducing a service that it says can ensure online ads don't appear next to fake news or offensive videos, marking the latest salvo in the billionaire media mogul's long battle with the world's biggest search engine.

News Corp.'s Storyful unit, which filters through the firehose of social media for publishers and brands, will track websites known as purveyors of fake news or extremist content and share that list with advertisers, who can use it to keep ads from appearing in controversial places.

It's pitched, at least, as a full blockade against content that's anathema to marketers, arriving as the two biggest forces in online ads, Google and Facebook, face pressure for failing to offer such tools.

Google, in particular, has taken heat for its video offering. Several major advertisers stopped spending on YouTube last month over concern their ads could appear next to offensive videos. Google introduced controls to mitigate the problem, yet rivals are trying to exploit the issue. Storyful's new service will focus on "video brand safety," executives said.

"This will be one way to give advertisers peace of mind," Storyful CEO Rahul Chopra said in an interview.

Few media companies have been more critical recently of tech giants like Google than News Corp. The YouTube boycott was prompted by a recent investigation by News Corp.'s London newspaper the Times, which found brands advertising next to YouTube videos posted by extremist groups. In a February earnings call, News Corp. CEO Robert Thomson cited the Times investigation as an example of the risks facing advertisers online.

Ad-buyer GroupM and marketing firm Weber Shandwick will be the first two companies to use the Storyful database. News Corp. will work with Moat, the analytics company recently acquired by Oracle Corp., and the City University of New York School of Journalism to maintain the list of controversial website domains. The database will be free, though Storyful eventually wants to provide a service to help advertisers decide where to place ads.

Chopra said Storyful, which News Corp. bought in 2013, is working not just on compiling a list of controversial websites, but on identifying how such content spreads online to stop it earlier. He wants to "choke the money supply to people spreading content like this." Storyful will roll out the new service for advertisers in the next couple weeks.

Trying to be a real rival
News Corp. is the latest company seeking to capitalize on the advertiser boycott of Google's YouTube. And it's been nudging its way into the conversation about digital advertising that's increasingly being dominated by Google and Facebook. WPP CEO Martin Sorrell told financial news site Cheddar recently that clients of his company, the world's largest ad agency, spend most of their budgets with Google, Murdoch's media empire -- including News Corp. and 21st Century Fox Inc. -- and Facebook, in that order.

The tense history between News Corp. and Google goes back years. In 2009, Murdoch accused Google of stealing articles and threatened to pull his company's stories from its search results. Since then, News Corp. has become a much different company. In 2013, it split from 21st Century Fox, with Fox taking the lucrative TV networks and film studio and News Corp. keeping newspapers like the Wall Street Journal and New York Post. It's also added technology and digital real estate companies to its media empire.

Google is also a roadblock to News Corp. in other ways. Murdoch's company is developing its own ad network offering "one-stop shopping" for brands to buy ads on properties like the Wall Street Journal, New York Post and Realtor.com. It's an investor in AppNexus, an advertising technology company that competes with Google's DoubleClick platform. And News Corp. owns Unruly, which competes with Google's YouTube in social video advertising.

Can you blacklist everything bad?
Ad industry executives and computer scientists don't agree how companies should filter offensive content online -- or if they can. Some experts said that Google needs human editors to monitor YouTube; conversely, Google executives have said the sheer bulk of the video service means that only a machine intelligence solution would work.

The YouTube boycott has had little visible impact on Google's bottom line. Most analysts see minimal loss to revenue, and the company's first-quarter results beat analysts' forecasts. CEO Sundar Pichai told investors he was "pretty confident" in the progress it had made with advertisers.

Still, Google's triumphant first-quarter results prompted further complaints from publishers about a duopoly with Google and Facebook. The two companies accounted for 68% of all digital ad growth last year, according to Pivotal Research analyst Brian Wieser.

News Corp.'s frustrations with Google have continued to fester. Early this year, the subscription-only Wall Street Journal stopped participating in a program that allowed readers to copy and paste a headline into Google and read the article for free. The move led to a bump in subscriptions, but also caused Journal stories to get fewer clicks, leading the newspaper's links to get buried in Google search results, according to a person close to News Corp.

Google's algorithm crawls for keywords, while the Journal's hardened paywall only allows Google users to read the first few paragraphs of a story unless they're digital subscribers. The Journal's parent company, News Corp.-owned Dow Jones, feels it's being unfairly punished by Google for having a digital subscription model, said the person, who asked not to be identified discussing internal matters. A Google spokesman said the company does not punish or treat individual publications differently in search results.

"Digital distributors have long been a platform for the fake, the faux and the fallacious," Thomson said on the call. He added "there will surely be a reckoning" in the ad market.