Publishers and Marketers Seek Solutions Beyond the Traditional Display Ads
READ THIS NEXT
5 NewFront Takeaways: What brands should know about Amazon, YouTube, TikTok, Roku and more

While there are varying definitions of each, the underlying thesis beneath them all is that web readers, viewers and social-network users are more likely to respond positively to marketing tactics that don't look like advertising and instead take the form of the rest of the content on the website or platform. On Twitter, that means promoted accounts and tweets; on Facebook, sponsored stories. And on media properties, that amounts to written, video or image-rich posts that look a lot like the editorial content on the site and which would make proponents of church-and-state divides between advertising and editorial departments cringe. 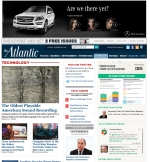 But whatever form these content-centric marketing products take, the rush of media companies looking to invest in them tells you one thing: They believe a sole reliance on display ads isn't the best way to turn, maintain or grow profits. The question, though, is whether custom content will grow into a go-to revenue source for media properties across the board or just a few select properties that do it best. "The enthusiasm for content marketing is partially an acknowledgement by the industry that banner ads can't be our best and only answer," said Jeff Lanctot, chief media officer at digital ad agency Razorfish. "There's an appetite for finding something new and different to help brands stand out."

Some, like BuzzFeed, are betting exclusively on written posts or image galleries, on which advertisers and their agencies collaborate with BuzzFeed's team to create or distribute. A recent one from Campbell's Soup contained photos of "15 Animals Who Are Behaving Like People." (No, the connection to the Campbell's brand is not clear to us, either.) Others, such as The Atlantic, are using advertiser-sponsored articles to drive better results of display ads on that same page, since they've found that click-through rates increase more than one-and-a-half times when an ad is placed next to a piece of content from the same advertiser. For example, TheAtlantic.com is promoting a series of Mercedes-sponsored posts that contain video interviews with innovators across different industries.

And then there are those such as Gawker, who say they aspire to have custom content eliminate the need for display ads, though they seem a ways off from realizing that goal. Gawker property Gizmodo has been the home of Intel-sponsored posts, the most recent of which is titled "Photographing Bikini-Clad Surfers in Paradise Is a Tough Job, But Someone's Gotta Do It."

Whether the trend is new depends on whom you ask. Detractors say this is a modestly modern variation on old-school advertorials. They also say it's more about differentiating than real innovation. Randall Rothenberg, CEO of the Interactive Advertising Bureau, contends that custom content is too labor-intensive and cost-prohibitive to widely displace traditional ad units, since advertisers typically don't run the same sponsored posts across a wide swath of different websites. "Customization passes costs up and down the supply chain," he said. (It's worth noting that part of the IAB's mission is to help drive the adoption of ad-format standardization in an attempt to grow the overall industry -- the opposite of customization.) Believers say the approach is different when developed in a way to maximize sharing on social networks, producing coveted, so-called "earned media."

One way BuzzFeed is trying to fight the scale argument is by testing out running its "story units" on other sites such as The Awl and Demand Media's Cracked.com in an effort to create its own kind of native ad network. Because it has to pay a revenue split to those third-party sites, this tactic cuts down on BuzzFeed's margins -- which regularly surpass 50% -- but extends its reach and perhaps attracts a new set of advertisers. For example, the Cracked.com home page recently displayed a story unit with a "Sponsored by Geico" tag and the headline "The Most Delightful Moments From Your Childhood in 28 Pictures." Clicking on the unit sends readers to Buzzfeed.com to read the post.

Reach is still critical. If you talk to agencies and brands, few are close to turning their backs on display advertising altogether. One of the more progressive digital marketers, Intel, said display ads will continue to play a big role in its digital advertising repertoire. "We leverage display for reach and frequency and driving to the right experiential destination, whether that 's Intel.com or a custom [content] program," said David Veneski, Intel's U.S. media director.

At the same time, Intel has executed custom-content campaigns with more than a dozen different properties this year in an effort to publicize the ultrabook category to millennials. That's undoubtedly a positive sign for publishers betting on custom content, but Mr. Veneski throws up a red flag when he explains what next year will look like: probably as much content being created, but with fewer individual partner sites. "It's a tremendous amount of work," he said of developing individual content programs for each partner site.

The challenges of the content model extend to publishers as well. At The Atlantic, Publisher Jay Lauf says he hasn't yet settled on the best way to value and charge for custom content (right now, The Atlantic charges a higher cost per thousand impressions, $40-plus , for an advertiser's ad that runs next to its sponsored content because of better performance.) At BuzzFeed, the business team has gotten used to missed opportunities to connect a specific brand to a timely meme because of agency turnaround times.

"The challenge, of course, is most brands cannot approve a viral sponsorship in an hour," BuzzFeed President Jon Steinberg said. Could Mr. Steinberg envision a day in which an agency or advertiser embeds an employee in a media company with whom they do a lot of business to help expedite content campaigns? While that hasn't happened at BuzzFeed, CEO Jonah Peretti said his team does meet with some of its advertisers on a weekly basis for this very reason.

If that doesn't sound like a sustainable way for a new industry to grow en masse, it's because it's not. Instead, Mr. Peretti is betting that we will eventually see a rise of agencies dedicated to content marketing, as we saw search-engine marketing shops pop up in the early days of AdWords.

Razorfish's global chief media officer, Jeff Lanctot, can see this future as well, especially as more of the buying of pixels is pushed through ad-buying automation technologies. "People should manage content marketing, brand integration, social campaigns and other innovative initiatives," he wrote. "Machines should manage banners."

What the speed of that transition will look like seems to depend on an entity's agenda. One year from now, BuzzFeed's Mr. Steinberg believes most major digital-media companies will sell a content-marketing product. The IAB's Mr. Rothenberg, on the other hand, sees a select few properties that continue to garner attention for their customized advertising products unique to their environment. At the same time, he predicts "global adoption" of the IAB's Rising Stars Display Ad Units -- a collection of six new ad formats that the IAB has been promoting to drive adoption by media properties of larger, more interactive ad units that big-name brands may find more attractive."It'll kind of look like the way media industry is today, where you have a balance heavily weighted toward standards," he said.

Inside the BuzzFeed Pricing Model

A $100,000 campaign with BuzzFeed typically nets five to 10 posts for an advertiser, according to Jon Steinberg, its president and chief operating officer. But BuzzFeed doesn't charge advertisers on a per-post basis; instead it charges advertisers a cost-per-thousand-impressions price for the thumbnail images and "story units" on BuzzFeed that tease the branded content and drive people to the posts. 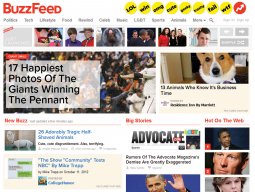 CPMs are also the standard for how BuzzFeed charges advertisers to seed their content into standard IAB ad units around the web, as well as to push content onto the home pages of other sites, such as The Awl and Cracked. (BuzzFeed says these days it's doing less of the former and hopes to do more of the latter next year.) Mr. Steinberg said the average CPM across all ad units for a campaign typically comes in around $9.

BuzzFeed charges advertisers cost-per-click prices to advertise their content posts in Facebook ads and Twitter-promoted tweets, and cost-per-view charges for branded video that Buzzfeed seeds onto other websites for advertisers.

Lastly, BuzzFeed charges a daily fee to advertisers who want their post to remain fixed in one of the two top paid spots on the BuzzFeed home page. The unit to the right of the main editorial headline (see "13 Animals Who Know It's Business Time ," above) costs $8,000 a day, but will increase to $10,000 in 2013 because home-page traffic is growing, Mr. Steinberg said. Likewise, the top "story unit," which appears as the second headline in the stream of homepage content, will rise from its current price of $12,000 a day to $14,000 in the first quarter of 2013.