Can Native Advertising Scale? These Networks Say It Can | Ad Age
Skip to main content
Sign In Register

Can Native Advertising Scale? These Networks Say It Can

But Are They Really
READ THIS NEXT
Google used 'jedi mind trick' to beat header bidding, unsealed court documents allege

It would be hard to find a hotter buzz-term in marketing than so-called "native advertising," which means a lot of things to different people but boils down to ads that look and feel like the content that surrounds them. At this point, everyone is latching onto the term, even when they shouldn't.

Criticisms of the concept include: it's just a re-brand of "sponsored content;" they're labor intensive to make; and, most damning, they just don't scale. A beautifully-compiled sponsored list on BuzzFeed may reach an audience of 100,000, but billions of banner ads are served each day, so the notion that native even comes close to the display's scale is a pipe dream.

"To be completely native, you must match the user experience of each individual publisher deploying the technology, so in essence, native advertising does not scale." wrote Darren Herman, Chief Digital Media Officer at The Media Kitchen, in an email to Ad Age.

But that hasn't stopped a number of third parties -- including BuzzFeed -- from launching "native ad networks" in a bid to make this type of advertising scale across the web. These networks work by embedding content teases -- or in some cases, the content itself -- on participating publishers' websites, with a click leading to the sponsored content itself. There are a number of networks in the native game already, but here six leaders in the space, with a little bit of detail on how each works:

Sharethrough
Founded in 2008 -- before "native advertising" was even a term -- Sharethrough now claims to reach 182 million unique visitors each month. That, according to comScore, makes Sharethrough the largest native advertising platform of all. Using Sharethrough, advertisers can serve videos and content previews that fit the look and feel of each participating publisher's site. The company recently expanded its offering to mobile, with PEOPLE, Serious Eats and Forbes signed on at launch. 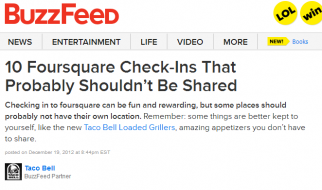 BuzzFeed
Looking to increase the reach of its native "sponsored stories" ads, BuzzFeed set up its own native ad network. The company pays other publishers such as Thought Catalog and Fark.com to run previews of its sponsored posts within their content streams, hoping readers will click back. According to BuzzFeed, the network has expanded since its launch in March. "Still cranking along!" wrote Fark.com CEO Drew Curtis in an email to Ad Age. Participating in BuzzFeed's native ad network, he said, has been good for business.

Thoughtleadr
Already claiming 160 million publisher impressions each month, Thoughtleadr is pushing hard to expand its reach even further, according to Sebastian Hassinger, the company's head of business development. The native ad network allows advertisers to build their ads in its self-serve system and then track the sentiment of those discussing them. If consumers hate an a native ad, Thoughtleadr will pick that up and allow advertisers to pause the campaign. The Atlantic probably could have used this functionality during its Scientology debacle earlier this year. 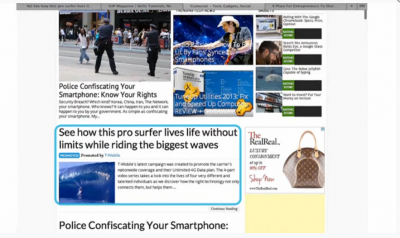 A Nativo ad in action

Nativo
Doing business with publishers such as Gatehouse Media and Reader's Digest, Nativo's native ad platform allows advertisers to build posts within it, and then serve those posts across its network. Once a nativo ad is clicked, the network renders the sponsored post within the participating publisher's website, making its ads closer to "pure" native ads than most other network offerings.

Outbrain
Live on over 90,000 publisher websites, Outbrain is a content recommendation service that powers the "related links" sections you see on sites such as CNN, Fast Company, Time and others. Publishers installing Outbrain have the option to include links to other content around the web, and get paid each time someone clicks those links. The Outbrain ads, which can take the form of text links or video, are formatted to blend in with the sites they run on.

Federated Media's "Content Reachtargeting"
Not yet a leader but worth mentioning is a new project from Federated Media. John Battelle, Federated's CEO, wrote in a blog post earlier this month that the company's native ads, while high performing, "lack the reach and frequency that brands crave." Federated, he wrote, will take steps to rectify the problem, hinting to a network-style solution. "Stay tuned," he said, promising more details will be revealed at next month's Advertising Week.