From Marilyn Hagerty to Joseph Kony, Notoriety Can Come in a Flash, But There's No Easy Way for the Sites Behind These Viral Subjects to Monetize Them
READ THIS NEXT
How to delete consumer data under CCPA guidelines

With so much media distraction vying for consumer attention, breakout content is everyone's goal. But the truth is that the economics of virality aren't always kind to those who create it.

Take Marilyn Hagerty and the North Dakota newspaper that publishes her restaurant column, the Grand Forks Herald. You probably know by now that her polite Olive Garden review garnered well over 1 million page views after Gawker picked it up and turned the 85-year-old critic into a minor and wholly unforeseen celebrity. In addition to countless blog mentions, tweets and Facebook posts, Ms. Hagerty earned a visit to New York to appear on Anderson Cooper's "Anderson," "Piers Morgan Tonight" and other TV shows.

Yet Marilyn Mania hasn't scored a big revenue hit for the newspaper owned by Forum Communications. 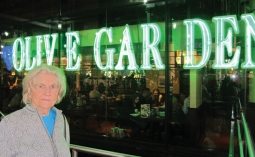 After the dust settled, Paul Amundson, Forum's VP-interactive, said that no direct ad deals resulted from Ms. Hagerty's breakout performance, writing in an email, "The boost in traffic was essentially a boost in dollars from the ad networks." The Forum and Herald team also made other resourceful attempts to monetize, but T-shirts and e-books aren't going to make anyone rich. As of Thursday night, 62 e-books at 99 cents apiece had sold. About 150 shirts had moved, but a chunk of the $20 price tag goes to charity.

"Hits don't always lead to revenue," said Jonah Peretti, founder of BuzzFeed, the much-talked-about purveyor of memes and, now, technology, politics and culture news. "It's a paradox of online publishing that the moments that generate the most excitement and traffic usually yield the lowest ad rates or go unsold."

Mr. Amundson offered a possible solution: "Having a nationwide exchange, or placement service to take advantage of these unforeseen bursts."

There is a strong sense that something is missing from the online-ad ecosystem, namely a service that allows national advertisers to take advantage of these tough-to-predict spikes in traffic and attention.

This problem is a known one. In 2009, a Wichita Eagle story about a kid who caught a mistake on a test got more than 3 million views in an afternoon for Kansas.com after being linked by Yahoo. According to an editor at the paper quoted by Nieman Journalism Lab, the extra traffic ended up netting only "a few thousand dollars." Blame remnant advertising and its often low rates.

Mr. Amundson, who has seen spikes in the past with weather-related stories, said, "It's difficult to get advertisers to commit to larger dollars "in case' you have a spike." The unpredictability of the social web isn't just a problem for local or regional outfits. On this topic, Mr. Peretti didn't sound all that different from his counterpart at the Grand Folks Herald. "Brands want to be close to the action, but spikes are difficult to predict and sell to advertisers in advance," he said. "I would love to find an adventurous brand willing to buy a "viral roadblock' on everything that goes viral on BuzzFeed each month," Mr. Peretti said. "It would be great for the brand, but they would have to be willing to give up control of exactly when their ads run and exactly what type of story they sponsor."

A very different challenge comes with managing the immense flows of traffic that come from a runaway hit, as in the case of Invisible Children's "Kony 2012," the controversial video that has racked up more than 100 million views and become the most viral of viral videos.

The campaign calling for the arrest of Joseph Kony, a war criminal and kidnapper, hit its traffic goals for the year in a single day, dominated chatter on the internet for a few news cycles, and was a hit from both an awareness and audience point of view. But there were tough moments along the way, especially in hosting all those visitors and managing the various systems, from back-end databases to the donation and sharing services that made it all come together.

"Usually in the nonprofit space, it's about storytelling and visuals and making sure the donation platforms work," said Javan Van Gronigen, founder of Fifty and Fifty, a creative studio for nonprofits. The studio worked on the campaign with fellow San Diego shop Digitaria. "This was a totally different kind of beast."

Interest in "Kony 2012" surged for several reasons: very smart social-influence strategy that made sharing easy and encouraged the lobbying of "culturemakers" such as Mark Zuckerberg and Angelina Jolie; loud criticism it received from parties who believed it oversimplified events in Uganda; and because the film was both beautifully executed and a personal exploration of an issue off the radar to many. (This personal quality became something of a liability as well, as founder Jason Russell, who stars in "Kony 2012," was detained by the San Diego police force after bizarre public behavior the week after the video caught on.)

"Kony 2012" was initially posted to Vimeo and then YouTube, where traffic picked up and sent millions to the site built by Invisible Children and its partners. Its host, Rackspace, shut it down, thinking it was a denial-of -service attack. And Facebook, which has its own usage limits, choked off the sharing for a while.

"We had a lot of people looking at this from different angles thinking something was wrong," said Mr. Van Gronigen. "We had to rebuild everything within two days."

He added: "It's not anything we did wrong, but it wasn't ready for that traffic."