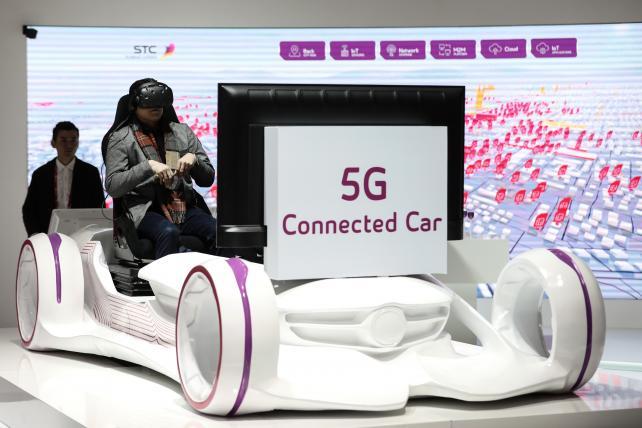 An attendee wears a VR headset for a 5G connected car experience on the Saudi Telecom Co. stand during the opening day of the Mobile World Congress in Barcelona on Monday.
Credit: Simon Dawson/Bloomberg

The technology that will revolutionize the way people and companies use mobile devices is closer than you think.

That was the message from the top network-equipment makers when they took the stage at the wireless industry's annual gathering in Barcelona.

China's Huawei Technologies, Sweden's Ericsson and Nokia Oyj from Finland are hoping that the fifth generation of wireless infrastructure will be a much-needed shot in the arm after years of stagnating demand for the gear used to build 2G, 3G and 4G networks. Their message at Mobile World Congress in Barcelona was that 5G is close, with the first commercial networks based on the new technology set to be built later this year.

"We'll start to see the first deliveries this year, we'll start to see handsets for enhanced mobile broadband coming next year, and then we'll see it start to ramp up from there," Ericsson Chief Executive Officer Borje Ekholm told Bloomberg TV. By 2023, he said, there'll be a billion 5G subscriptions worldwide. "So it's a fairly quick ramp-up."

Equipment vendors have talked for years about the coming 5G revolution and the riches it could bring to operators such as Verizon Communications, Deutsche Telekom and China Mobile. The new technology can be used not only by consumers, but also by enterprises looking to digitalize and remotely control everything from industrial manufacturing to complex surgery.

While it's still unclear exactly which benefits telecoms companies will discover in cellular technology that promises faster downloads and lower latency, Ericsson and its rivals are gaining confidence as agreements with carriers move beyond mere trials. In December, Ericsson agreed with Verizon to deploy a 5G commercial network in some U.S. markets in the second half of 2018. Nokia said last month it had started operating a commercial 5G radio system in Bellevue, Washington, in partnership with T-Mobile US and Intel.

"The commercialization of 5G is picking up pace and will start this year, helped by product standardization and the emergence of real demand for 5G technologies," Huawei CEO Ken Hu said. "2018 we believe will see very positive progress of 5G."

Nokia shares rose more than 4 percent Monday after CEO Rajeev Suri told investors on Sunday that the Finnish company is in a good position to reap the rewards of operators' 5G investments and that the market and customer interest is accelerating.

"I think this was the most bullish Suri I've seen to date," Inderes analyst Mikael Rautanen said in an emailed note. "They seem really optimistic about how fast 5G is coming and how well Nokia is positioned."

Ericsson rose as much as 4 percent in Stockholm.

While self-driving cars and technology like virtual reality support the prospect of 5G deployments in the mid to long-run, there are also short-term needs that the new generation of networks can answer. High bandwidth and speed will be the first benefits of 5G, Huawei's Hu said. Tests show transfers can reach 2 gigabits per second, hitting similar speeds as fixed fiber technology, he said.

"These short term aspects help us develop a more convincing business case when we approach the industry for adoption," Hu said. The company has signed pre-deployment deals with 40 carriers, 30 of which are pre-commercial trials, in cities including London, Vancouver, Seoul and Tokyo. Vodafone Group and Telefonica are among the closely-held Chinese company's customers.

Nokia and its rivals are hoping the shift to 5G will be smoother than in the current generation, when carriers pushed back investments and price wars hit hardware vendors' profits.

The advent of commercial 5G is good for vendors like Huawei and Ericsson—as long as they don't give away the gear in a race for market share, Ameet Patel, Senior Analyst for Northern Trust Capital Markets said in an email. But for carriers it could spell an acceleration in investments and the start of another cycle of spending; "another drag on cash, with rising borrowing costs and historically limited demonstration of sustained pricing power."