Hopes to Take on Competitors With Apps Featuring Batman, Lady Gaga
READ THIS NEXT
Florida Paints swoops in to develop products with fired Sherwin-Williams employee behind viral TikTok account

As Nokia prepares for a crucial push to resuscitate its smartphone business, it's calling in some heavyweights from across the Atlantic: Batman, Lady Gaga and Perry the Platypus.

The Finnish company has teamed up with Walt Disney Co. and DreamWorks Animation to tackle an application shortage that has left it trailing Apple and Google. The deals are part of a strategy to ensure Nokia has the most popular smartphone apps, even if it lags in the total number, said Marco Argenti, who oversees Nokia's relations with developers.

Nokia fell behind Apple's iPhone and devices running Google's Android after failing to attract many app developers. As CEO Stephen Elop prepares to unveil Nokia's first devices based on the mobile version of Microsoft's new Windows 8 operating system in New York today, he is betting that apps with novelty features, such as augmented reality, will make up for the volume handicap.

Users of iPhones and Android handsets can choose from more than 600,000 apps -- roughly six times the number available for Windows Phone, the operating system Nokia uses in its Lumia devices. The app superiority has helped Apple and Android grab about 85% of the smartphone market, vs. 3.5% for Windows Phone, according to research firm IDC. 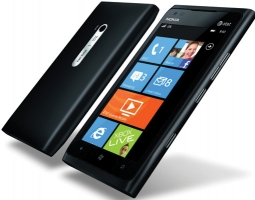 A Batman app built exclusively for Nokia by Foursquare Labs lets users fight for either the superhero or an enemy named Bane by "checking in" to claim a location for their side. The Disney apps, previously available only for Apple and Android devices, include "Where's My Perry?," a game starring Perry the Platypus from the cartoon "Phineas and Ferb," and "Where's My Water?" with Swampy the Alligator.

Nokia is also teaming up with AOL to build an entertainment app for mobile devices that would use augmented-reality technology, according to two people familiar with the matter who asked not to be identified before an announcement. Such technology combines a phone's camera, location-based function and internet connectivity to offer services such as allowing users to find the nearest restaurant or bus, or to check movie times through a camera display. Yesterday, Nokia introduced a free music service that lets Lumia users listen to exclusive playlists created by Lady Gaga, Lana Del Rey and Rihanna.

The new phones will be crucial for Nokia, which is burning cash as it tries to reverse falling sales. A failure to appeal to year-end holiday shoppers would ensure continuing losses. "This autumn is critical for Nokia, and the next Lumia phones may be a make-or-break moment for them," said Teemu Peraelae, who helps manage $1.5 billion including Nokia shares at Alfred Berg Asset Management in Helsinki.

The new devices will face off against the latest Android and Apple handsets. Motorola Mobility, a unit of Google, is set to unveil one of the first full-screen phones in the U.S. later today in New York, according to a person familiar with the plan. Apple is planning its own introduction on Sept. 12.

The top 300 applications account for about 85% of downloads, according to researcher Strategy Analytics. Still, Nokia is missing popular games such as Rovio Entertainment Oy's "Angry Birds Space." Zynga has more than 20 mobile games for Apple and Android users and none for Windows Phone (though it plans to introduce two -- "Words with Friends" and "Draw Something" -- this year).