OAAA Shares Real Data for Its 'Feel The Real' Campaign

Outdoor Ads Drove Traffic to Digital -- and Planted Doubts About Digital
READ THIS NEXT
TikTok tactics: What to know about reaching audiences on the social media platform 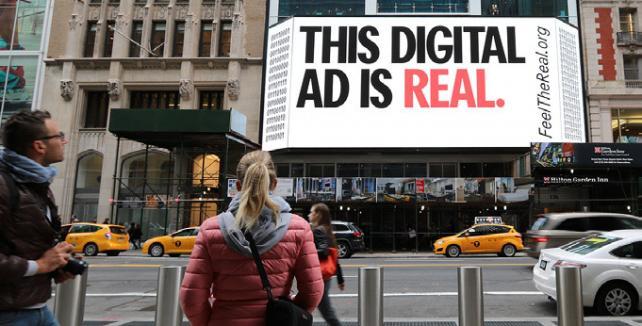 One of the ads in the Outdoor Advertising Association of America's 'Feel the Real' campaign last fall.
Credit: OAAA

Last fall the Outdoor Advertising Association of America won attention during Advertising Week with a set of very effective out-of-home ads for, well, out-of home ads. With billboard trucks attacking ad fraud online and precisely-placed signs targeting individual ad buyers by name, the campaign drove traffic to FeelTheReal.org, demonstrating the power of its own medium and simultaneously sowing doubt about betting everything on digital.

Now, with digital advertising and ad fraud each setting new records, the OAAA is building on its case with a white paper detailing what happened after the Advertising Week campaign.

More than 27,000 unique visitors came to FeelTheReal.org from Sept. 25 through Nov. 15, according to the paper, 73% from mobile devices and 25% from desktop computers. Fifty-seven percent were men and 43% were women, according to responses that visitors provided to a questionnare on the site. And about 40% said they were marketing professionals.

Eighty-five percent of those 27,000 people said they arrived at FeelTheReal.org after they saw an ad in the real world. The OAAA said it garnered $2.2 million in earned media during the first week of the campaign. It was able to place its ads in places like Time Square, on buses and elsewhere by working with its members.

"We knew from past studies that out of home advertising drives more engagement than TV, radio and print and we had a hypothesis that we can do targeted out of home advertising that would drive online traffic," said Ted Florea, chief strategy officer, Partners NYC, which created the "Feel the Real" campaign. "What surprised me most is that we had ads on Time Square, super highways, and 40% of those who came to the websites were marketing, advertising and media professionals. The degree in which we got a well qualified audience was greater than any of us hypothesised. That was our greatest surprise."

FeelTheReal.org greeted visitors by asking whether they were humans or robots, showing those who said "robot" a quote from the TV series "Mr. Robot" -- in binary code. After someone on Reddit cracked the code, FeelTheReal.org saw 15,000 additional unique visitors within 48 hours, the OAAA said. Only 10% of those worked in the media.

About 5% of those who visited the website said they were a robot, while 95% said human, according to the OAAA.

The OAAA was also contacted by unscrupulous vendors that promised to increase its site traffic at a cost of anywhere from $40 to $250 per 10,000 unique visitors, according to the paper.

OAAA agreed, but directed the brokers to send the traffic to mirror sites at FeelTheUnreal.org, FeelTheFake.org and FeelTheBots.org. "What we got back after a week can best be described as utter nonsense," the OAAA wrote in its white paper. Despite promises of traffic from the U.S., the views appeared to come from Russia, China, Indonesia and the Philippines. The mirror sites saw nearly 10,000 unique visitors a day, all of whom stayed on the site for exactly 18 seconds before bouncing, OAAA said.

Users who went to the real website stayed an average of 2 minutes, 9 seconds, according to the paper.

"I'm optimistic that as time progresses and we get a handle on how big digital reality's problem really is, we'll start being able to take the measurements to squeeze out bot traffic, to not charge for non-viewable ads, to stop over delivering impressions above and beyond what work," Mr. Florea said. "In the meantime, what we think is fascinating is that you can see real world impact from out of home ads that you know are 100% bot free." 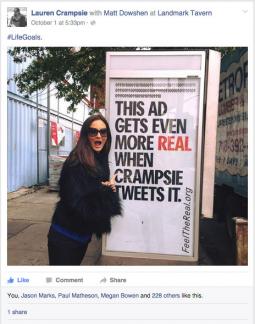 In the end, 1,465 out-of-home units delivered 237 million impressions from $3.4 million in donated media, which comes out to about $14 per thousand impressions, according to the outdoor association, which said out-of-home sales spiked 6.4% following the campaign. FeelTheReal achieved an ROI of $23.3 million, or about seven times its initial investment, OAAA said.

"Out of home has always been the medium that gives brands this big bold presence in the real world," said Nancy Fletcher, president and CEO of Outdoor Advertising Association of America. "The fact it can also drive real clicks by real people was one of the big learnings and excitements that came out of this campaign."