The Key to the Business of Love? Data, of Course | Ad Age
Skip to main content

The Key to the Business of Love? Data, of Course

Many dating sites like to plug their algorithms, indirectly boasting about their ability to take all the data that their users input and slice it, dice it and crunch it in a way that results in better matches. OKCupid, which IAC acquired for $50 million a year ago, is one of them, which shouldn't come as a surprise when you consider that its four founders graduated from Harvard with mathematics degrees.

But the company has also found new ways to help drive publicity for its site and assist brands in reaching existing and prospective customers.

One of the sexiest uses has manifested itself on OKTrends, OKCupid's data-research blog. There, OKCupid surfaces trends about the daters who use its site in way that is almost always compelling, and often controversial. One post, for example, titled "How Your Race Affects the Messages You Get," dug into message-reply statistics, showing that race certainly does have an impact on dating habits. The post registered more than 1,500 comments. More recently, an entry in April titled "10 Charts About Sex" included research on the correlation between female OKCupid users' exercise habits and their ability to achieve orgasm. More than 22 ,000 people liked the post on Facebook and 3,500 readers shared it on Twitter. 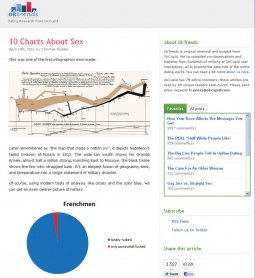 Unfortunately for fans of the blog, that entry was the most recent one, raising the possibility that IAC may have killed OKTrends. OKCupid CEO Sam Yagan said that 's not the case. "There were some things we were doing that weren't very scalable in terms of organizational structure," he said. "So we've addressed some of that stuff and we'll be updating it much more regularly [beginning in] the middle of this year."

For brands, OKCupid utilizes its data in two ways. Not surprisingly, one is for ad targeting. Some marketers just want to target based on age, gender and ZIP code, for example. Mr. Yagan called that "super easy." But, for others, OKCupid layers on psychographic targeting to reach daters of a certain lifestyle or value system.

"The average OKCupid user answers 233 'match questions,'" Mr. Yagan said, "so we can look at them across a number of axes and by seeing how they answered lifestyle questions, we can determine, for example, how adventurous they are." Mr. Yagan, who now oversees ad sales for all IAC personals properties, said he is beginning to roll out this kind of targeting to other company sites. The challenge, Mr. Yagan said, is that there aren't unified definitions around the web to bucket users into different psychographic categories. 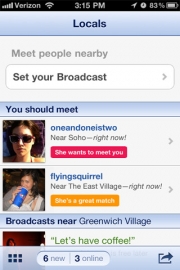 OKCupid also mines its data sets to conduct market research for brands, such as big-box retailers. By examining the way women in certain target ZIP codes describe themselves on their profiles and answer questions on the site, Mr. Yagan believes brands can uncover findings that can help them market better to current and prospective customers alike.

Lastly, OKCupid of course uses its data to try to increase the likelihood that its users will find dating success through the site. Unlike other dating sites geared toward the goal of marriage, or at least a serious relationship -- such as fellow IAC company Match.com -- Mr. Yagan said OKCupid's aim is simply to drive offline dating, optimizing toward a minimum of three messages exchanged between two daters as a starting point. "It's impossible to track [marriage percentages] and marriage isn't the only desired outcome for a lot of people," he said. The first algorithm, based strictly on the responses to "match questions," strives to predict compatibility between any two users. The second -- a more-critical equation -- is for figuring out the likelihood that a certain OKCupid user will respond to another based on past on-site activity of those users and similar users. Inputs include attractiveness and the grade level of a user's written profile, for example.

What Mr. Yagan is most excited about, though, is the impact that location-based data can have on the matchmaking process. In August, OKCupid launched a mobile app called Locals, which allows users to broadcast their intentions for the evening ("Anyone want to get drinks on the Lower East Side?") to nearby users of their choosing. Mr. Yagan said about half of OKCupid users have used the app, and that about one-third of total OKCupid usage occurs on this mobile extension. Ultimately, OKCupid hopes to fold into its match-making algorithms information about responses on meet-up requests from the app as well as other location-based data.

"If somebody responds and we know through GPS that the two were at the same place, we know you guys got together," Mr. Yagan said. "Whether that date goes well or not is another thing, and less interesting. The main point is to drive offline dating."