Digital Ad Fraud Is Rampant. Here's Why So Little Has Been Done About It | Ad Age
Skip to main content
Sign In Register

Digital Ad Fraud Is Rampant. Here's Why So Little Has Been Done About It

The Industry Talks a Good Game But The Dirty Secret Is Everyone Benefits, Except Marketers
READ THIS NEXT
Shopify comes to Spotify

When top digital-advertising executives descended on Palm Desert, Calif., last month for the Interactive Advertising Bureau's Annual Leadership Meeting, one topic dominated conversation from start to finish: fraud. In the hallways and onstage, the industry's leaders made it clear that the problem was out of control and needed to be stopped.

In a town hall on the subject, one participant even suggested putting a bounty on perpetrators. "What about 'Wanted, dead or alive?'" he said. "Twenty-five thousand dollars to each company who puts one of these guys out of business. Make it $100,000!"

The ad industry loves to talk a big game when it comes to fighting ad fraud. But when it comes to actually doing something about it—bounties or otherwise—the story is much different. Fighting fraud costs money, and just about every company in the ecosystem can benefit in some way from it. The rational decision for most is to look the other way. 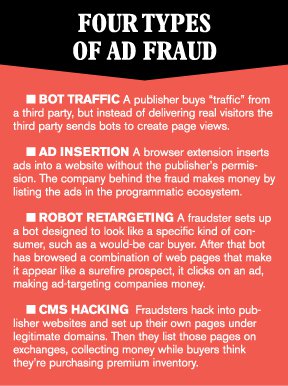 Purging fraudulent impressions from the system would mean higher media prices and lower performance (though more accurate). Fraud pumps up publishers' traffic, exchanges get paid a percentage for trading it, buying platforms' performance looks better because of it, and agencies can bring those great results to clients. Everyone wins!

Little incentive
Brands, of course, are aware fraud exists and price that into buys. Meanwhile, they've moved on to shinier objects like "native" ads and social media. The truth is, there's little incentive to fight fraud.

"I'm pissed," said Tom Phillips, CEO of Dstillery, a technology company that lets buyers purchase programmatic ad inventory. "We're out there trying to do it the right way and by comparison we're facing a prisoner's dilemma against competitors who show great results from fraudulent traffic," he said. "Anyone along the chain who is playing it straight gets screwed."

What does it cost to go straight? Eric Franchi, co-founder of ad network Undertone, said his company brought the percentage of suspicious activity in its network down to the 3%-to-5% range by having fraud-detection companies Peer39 and Integral Ad Science monitor its inventory. Each day, Undertone reviews the reports and removes those sites.

"A shoot first ask questions later approach," is how Mr. Franchi described it. "Clearly if people are saying that 30% of the impressions out there are fraudulent, there needs to be a lot more companies taking these steps."

The process is expensive. The fraud-detection firms charge fees based on the number of impressions monitored and Undertone eats the cost.

Opaque world
Fraud flourishes in the opaque world of ad networks and exchanges, where buyers often don't know the sites they're buying due to agreements between exchanges and the publishers that supply inventory. But Andrew Casale, VP-strategy at Casale Media, said fraud could be minimized simply by showing buyers the top sites on which their programmatic media dollars are spent.

"There's going to be a lot of questions raised if you start to study the list," he said. "On the marketer end, everyone is saying 'I have no idea what I'm actually buying because I don't look at because it's too big.' That's a convenient excuse but it can't remain an excuse for long."

Curt Hecht, global chief revenue officer at the Weather Company, said digital-ad buyers could make a difference by asking their suppliers the right questions. Those include: How are the ads procured? Where are they placed? Where will they run? Where won't they run? Who are the different partners? And what do they do?

'Anyone along the chain who is playing it straight gets screwed.'

Mr. Hecht described these questions as common sense, but they assume the buyer wants the answer. If the price is right and the performance is there, who cares?

Michael Tiffany, CEO of fraud detection firm White Ops, said some fraud today is so egregious that the only way it can be succeeding is because nobody cares. The more sophisticated fraud, he said, presents challenges but is not unbeatable. "The IT staff of ad-tech companies are just not built to be winning fights against the world's best hackers," he said.

The lack of consequences is playing a major role. Harvard professor and ad-fraud researcher Ben Edelman suggests making refunds for fraud traffic a contractual obligation. "In practice right now, you promise to deliver it, you don't quite deliver it, people shrug, the world moves on," he said.

But even Mr. Edelman isn't sure that's workable. "I don't know if they have the wherewithal, the backbone, the legal enforcement, the lawyers frankly, to go and hound each other until they're all honoring their respective promises to each other," he said.