Legacy.com Has a Reach of More Than 20M Unique U.S. Visitors a Month 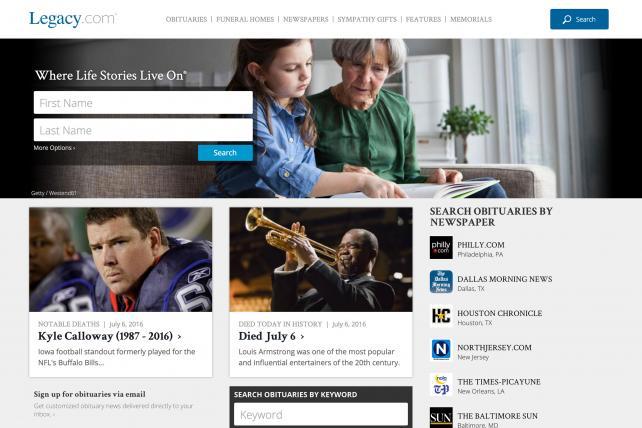 On the weekend of Muhammad Ali's death last month, the worldwide leader in obituaries published 600 words about the legendary boxer. The perfunctory notice on Legacy.com had little of the craft devoted to the 4,500-word remembrance in the New York Times or the more compact appreciation in the Economist.

But the website received mourners on nearly a million obituaries.

Among the departed was Cynthia Johnston Anderson, 75, a guidance counselor at Statesboro High School in Georgia and president of the Civic Garden Club. June also saw the demise of Clara L. Berleue, 85, "an avid Nascar fan" who spent 23 years at Corning, lost her husband 38 years ago, and is survived by 15 grandchildren and 25 great-grandchildren.

Then there was Robert Paul Balgley, 104, who was "brilliant in math as his father had been," served in France in World War II, lost his first wife in an airplane crash, visited "most of the countries of the world," and will be "greatly missed by his longtime caregiver, Hermine Rattler."

It's a never-ending wave of grief and fond remembrance that underscores the transformation of how we learn about the dead.

It includes video, audio, digital guest books and other interactive features. They aren't new -- the Times's tribute to the victims of 9/11, "Portraits of Grief" (hosted by Legacy.com), is 15 years old. But with 62% of U.S. adults now getting news from Facebook and other such sites, according to a 2016 Pew Research Center Study, obituaries are being experienced online as never before, including on thousands of funeral home websites.

Mr. Parrott puts Legacy's annual revenue at $20 million to $100 million. Its real power lies in its reach: over 20 million unique U.S. visitors a month, according to Comscore. More than half of the 200,000 people who die each month in the U.S. end up on Legacy, Parrott estimates, often while running as death notices in newspapers or on funeral home sites. Americans spend about $500 million annually on newspaper obituaries, said Mike Heene, general manager of Adpay, which places them in newspapers around the country.

One death notice that went viral: 'Faced with the prospect of voting for either Donald Trump or Hillary Clinton, Mary Anne Noland of Richmond chose, instead, to pass.'

Traditional obits, written by dedicated reporters, have become so rare that only a few mainstream print outlets in the U.S., including the Times, the Washington Post, and the Associated Press, have substantial operations. Meanwhile, obituaries for ordinary people are increasingly done by amateurs. At Legacy, everybody gets into the act -- friends, family, even the decedents themselves are the writers. And now the world can read what they've written and see the photos they've collected.

Some on Legacy.com are "asleep in Jesus," others have "returned to Allah." Many had hobbies or liked drinking a cold beer. Most have loving families. A few each month are reported dead of heroin overdoses.

When Val Patterson of Salt Lake City died in 2012, he used his self-written obituary to unburden his conscience: "Now that I have gone to my reward, I have confessions and things I should now say. As it turns out, I AM the guy who stole the safe from the Motor View Drive Inn back in June, 1971."

Recently obits have begun to incorporate voting advice. Donations "can be made to the Utica Animal Shelter or consider a vote for Donald Trump," goes the notice for Evelyn E. Aversea of North Utica, N.Y., who died on May 18 at 93. "She was affectionately known by her friends and family as 'Evil Evie.' " On the other hand, Muriel "Annie" Monrad of Phoenix, who died at 79 on May 15, "wanted everyone to know that Donald Trump is a [very, very nasty thing]."

Mary Anne Noland of Richmond, Va., was "faced with the prospect of voting for either Donald Trump or Hillary Clinton" and "chose, instead, to pass." Noland's obituary went viral, as others have in recent years, bringing newfound fame to the anonymous.

At first, digital was "a tough sell" to the funeral homes, said Walker Posey, spokesman for the National Funeral Directors Association, which represents 10,000 homes in a conservative industry. "Now you're hard-pressed to find one without a website."

Companies such as Disrupt Media of Zanesville, Ohio, and FuneralOne of Detroit build multimedia sites for funeral homes that feature videos of the dead and webcasts of the ceremony. Some offer recordings of the service or alert Facebook friends about the death and point them to the online obits. With a webcast, you set the time and send a link so everybody can watch. The extras typically add a few hundred dollars to a funeral.

"The point is to increase participation," Posey said. "Anything we can do to provide tools for grief felt by families."

In the pre-internet era, people would read about the dead in the morning papers or hear about them a bit sooner in broadcast media. Now everyone is a potential broadcaster, and news of the deaths of such stars as David Bowie and Prince zips around the world on Facebook and Twitter within minutes. People add their comments as they pass the news on.

With its 1.65 billion users and scores of local papers posting news, Facebook puts up lots of obituaries but doesn't keep track and hasn't automated a way to alert a user's Facebook friends to his or her death. It adds the word "Remembering" to the tops of profiles of deceased users, said spokesman Alec Gerlach, and it offers a "legacy contact" feature so that users can list a person responsible for the profile if the user dies, a kind of digital executor.

"Facebook is all about being alive and in the moment," Legacy's Parrott said. "I hope we can figure out how to work with it."

'Waffle House lost a loyal customer on April 30,' one post on Legacy.com lamented.

Legacy, which is owned by the Boston private equity firm Great Hill Partners, started in 1998 as a service for funeral homes to post obituaries. It didn't catch on until it began striking partnerships with newspapers. The site grew to comprise more than 1,500 newspapers, including 85 of the top hundred papers in the U.S., Parrott said. Most people visit it by clicking on their local newspaper or funeral home website.

Ad revenues from Legacy's pages are split with the newspapers, which often make a profit, despite paying Legacy for posting their death notices. That differentiates Legacy from services like Craigslist.org, which simply replaced other forms of classified advertising that used to be very profitable for newspapers, such as help wanted, real estate, and car ads.

Newspapers still charge a premium for the dead. A New York Times death notice costs $236 for the first four lines. (You can sell your dog for $23.25 a line.)

"The bereaved buyers are in no mood to shop," said industry analyst Alan Mutter of Broadband XII.

Legacy has about 200 employees, many of whom spend their days combing the guest books for trolls: everything from profanity to reports that dead Uncle Bob had an affair to such remembrances as "I'm glad he's dead."

"When you read millions of comments, you get better at picking out inappropriate content," said Stopher Bartol, Legacy's founder.

The rest of Legacy's employees spend their time on product development, engineering, advertising, and editorial, writing a handful of blogs, like Born Today in History, and advice columns.

On July 1, Born Today featured Diana, Princess of Wales, declaring that "the world mourned at her shocking death in a car accident at 36," while Died Today in History featured Marlon Brando, who "developed a reputation as a prankster as well as a difficult star to work with." In an Advice and Support column, blogger Florence Isaacs led us on a quick tour of the use of music in funerals, from ancient Rome to New Orleans jazz to the late Supreme Court Associate Justice Antonin Scalia's recent Mass, at which a choir sang psalms.

Accompanying the rise of the obit selfie is the long decline of the local professional obituary, often one of the small treasures of local newspapers. These were the obits of the banker, the housewife, the restaurateur who had served the community for a generation. Joan Harvey, who wrote obits for the Portland Oregonian for over a decade ending in 2010, mourns the loss of journalistic standards.

"Obits were fact-checked, family reminiscences were checked," she said. "They were invaluable for family histories and the community." The new online obits, written haphazardly, contain fewer facts, she said. "I see so many inaccuracies, people serving in World War II when they were born in 1930."

"The danger with family-written obits is they get so treacly," said Larken Bradley, who wrote obituaries for small community dailies around Point Reyes, Calif., for many years. She said she missed more balanced accounts. She wrote about deceased locals with the knowledge of a longtime resident who "knew where the bodies were buried," Bradley joked.

It's an old bromide among professional obit writers that their stories are about life, not death. The new world of online obituaries seems more about death than life. The emphasis is on departure and farewells, services, and memories, not so much the lived life, well examined. You can click around all day on Legacy reading obituaries of people who died in the past few days, but it's unlikely you'll find one as amusing as the guy who stole the safe from the Motor View Drive Inn back in June, 1971. That one went viral a few years ago.

Other obits come courtesy of Legacy staffers, who curate their most memorable posts, including one that began, "Waffle House lost a loyal customer on April 30." The deceased "conquered polio as a child contributing to her unusually petite ankles and the nickname 'polio legs' given to her by her ex-husband." Hence "it should not be difficult to imagine the multiple reasons for their divorce 35+ years ago." She died after battling "lupus, rickets, scurvy, kidney disease and feline leukemia."

We've lost something in the new world of obituaries. But we've gained something, too -- almost unlimited access to the dead.