Who Owns the Dashboard? Apple, Google or the Automakers? | Ad Age
Skip to main content
Sign In Register

Who Owns the Dashboard? Apple, Google or the Automakers?

Companies Have Shared Agenda, Competing Motives for In-Car Interfaces
READ THIS NEXT
Activision says 40 employees were disciplined over misconduct scandal
So far, Apple calls the shots on what's available on CarPlay.
Credit: Apple

When car companies do business with Apple or Google, they like to say they are dealing with a "partner" -- not a supplier.

In the case of Apple's CarPlay and Google's Android Auto -- two new electronic interfaces designed to let drivers use their smartphone apps on a vehicle's built-in screen -- it's becoming clear that they won't always be silent partners.

At the moment, Apple, Google and automakers have a shared agenda: to neatly stitch together vehicles and smartphones so drivers can safely stay connected behind the wheel. But their competing philosophies and interests are starting to come into play, raising the prospect of tensions over safety, privacy or profits.

To understand how that might happen, consider WhatsApp, a smartphone app that allows people to swap text messages free over the Internet. Though its U.S. user base is relatively small, WhatsApp is hugely popular in Europe and has 600 million-plus users globally, making it the world's most popular messaging service.

WhatsApp would seem to be a perfect fit for CarPlay and Android Auto. After all, one of the main reasons automakers have embraced Android Auto and CarPlay is to tap Apple and Google's voice-recognition technology, which could help end the temptation to tap away at a smartphone while driving.

But it's not that simple.

Google demonstrated at the Los Angeles Auto Show that Android Auto will read its driver an incoming WhatsApp message and allow the motorist to dictate a reply. "Helping drivers to more safely send and receive messages using their voice in the app of their choice is one of the key design goals of our product," Andy Brenner, product manager for Android Auto, wrote in an email through a spokesman.

But CarPlay does not support WhatsApp. Apple, known for the control it exerts over its products, confirmed that third-party messaging apps are unavailable. The only options are to use the phone's texting function and Apple's proprietary messaging service, iMessage, which competes with WhatsApp.

"This will be a question to Apple, for sure," Mathias Halliger, chief architect of Audi AG's MMI infotainment system, said when asked about the absence of third-party messaging apps. "We have a lot of Apple users."

Who owns the product?
The absence of WhatsApp may seem like a small matter.

Mr. Halliger, who works closely with Apple from Volkswagen Group's r&d center in Silicon Valley, predicted that Apple will eventually add third-party messaging to CarPlay -- presumably, after automakers or customers clamor for the service. Apple didn't reply to a request for comment for this article.

But this situation shows how the balance of power in the auto industry is shifting.

Automakers have historically enjoyed near total control over the content in their vehicles, with suppliers working at the whim of their customers. But in this case, Apple has made the decision; the automakers must live with it.

In the future, the disagreement could be weightier. It is not difficult to imagine that automakers may wish to block an app that harvests data, only to discover that Apple or Google is the one calling the shots.

Automakers contacted by Automotive News said they have helped develop guidelines for apps through groups such as the Google-led Open Automotive Alliance. But they do not have a say in individual approvals.

"Apple and Google own the products themselves and are really the only ones who can speak to the final decision-making," a GM spokesman wrote in an email. He said that members of the alliance have "committed to support any and all apps within Android Auto and Apple CarPlay that meet the guidelines in place."

More than two dozen automakers have committed to CarPlay and Android Auto, with the rollout expected to begin in earnest in 2015. Audi, Honda, Hyundai and Volvo are expected to be among the first to use them in mass-market models in the U.S.

A 'preprogrammed' conflict
It is hard to predict how the new power relationship will play out. But it is clear that Apple, Google and automakers have differing profit motives and visions for how apps should operate in vehicles.

Automakers are clearly more fearful than Apple and Google of lawsuits over privacy breaches and distracted driving, said Jorg Brakensiek, who leads a technical working group at the Car Connectivity Consortium, which has developed a rival platform called MirrorLink. This makes sense, he said, because car companies are historically the ones that get slapped with a lawsuit when something goes wrong with a vehicle. 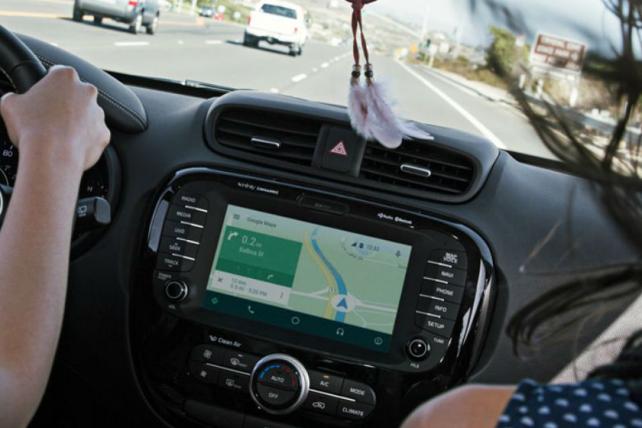 With CarPlay and Android Auto, "the OEMs are going from full control to more or less no control, and that might create some tensions," said Mr. Brakensiek, who works on MirrorLink on behalf of Microsoft Corp. "They get more content, but I think they're slowly recognizing the downside. Nothing comes for free."

This risk of tension seems to be dawning on auto executives. Daimler AG CEO Dieter Zetsche and Volkswagen Group CEO Martin Winterkorn recently spoke out about the likelihood of conflict with Google.

"Google tries to accompany people throughout their day, to generate data and then use that data for economic gain," Bloomberg quoted Mr. Zetsche as saying at a conference in October. "It's at that point where a conflict with Google seems preprogrammed. That's where we need to negotiate."

Different styles
For now, the only type of third-party app that Apple supports is streaming audio, which is seen as CarPlay's biggest edge over today's infotainment systems. Apps such as Spotify, iHeartRadio and Stitcher are available on Apple's platform, even though they compete with Apple's iTunes Radio.

Android Auto, by comparison, supports several third-party messaging apps besides WhatsApp. And last month the company went a step beyond Apple and released a software kit that allows any developer to write code for vehicles.

At the same time, Honda announced it was opening a small garage in Mountain View, Calif., where developers can test Android Auto apps in a Honda Civic and get feedback from Honda engineers with no strings attached.

Android Auto requires these third-party apps to fit into a template, forcing them to follow certain restrictions. Beyond that, there is a testing regime to make sure the apps are safe to use behind the wheel.

Audi's Mr. Halliger said the testing relies upon distracted-driving guidelines that U.S. regulators released in 2013. If a driver has to look away from the road for more than two seconds at a time or 12 seconds total to perform a task, for instance, it's not supposed to be available.

"They have different styles," Mr. Halliger said, when asked about working with Apple and Google. "There's the Apple approach and there's the Android approach. But I think [the automakers] are pretty much aligned. We have to be. Each party has their own opinion about how this looks in detail, but of course, the automotive experience aligns us."