More Than Half of Pandora Users Have Never Used Web Version of Service
READ THIS NEXT
WhatsApp delays updated privacy policy after user confusion, backlash

Pandora is finally adding more features from its desktop experience to its mobile apps as it looks to cater to the growing number of its listeners who have never used the web version of the streaming radio service. 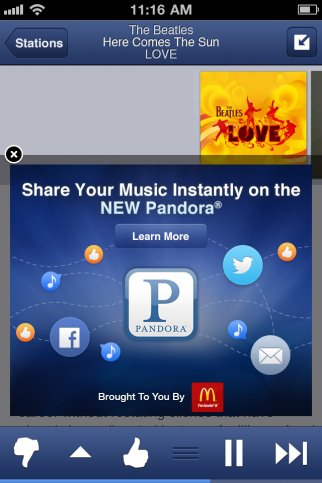 What percentage of users exactly, he wouldn't say. But more than 50% of Pandora's registered users -- which the company says now number more than 175 million -- have never logged onto the desktop service, he said. And more than 75% of Pandora listening hours now come from people using the service on phones, tablets, or other connected devices.

"Until this release, a lot of our innovation has been delivered on the web and has not made it to the mobile phone," he said.

But the habits of its users have now forced the company's hand. With the relaunch of the apps for Android and Apple iOS devices, Pandora is adding a few main features: the ability to view lyrics, musical qualities of songs and other info about artists, songs and albums; new social functionalities that let Pandora users follow other Pandora members who create personal music profiles; and, perhaps most importantly, tools to let listeners share to Twitter and Facebook individual songs as well as stations they've created.

The mobile refresh will be accompanied by two house audio ad campaigns that will run through the end of November that will promote the new features and educate users on how to use them. McDonald's, State Farm, Nike and Sony are sponsoring the app relaunch and listeners who visit Pandora after clicking on a link that was shared by a friend will be greeted by ads from these advertisers.

Pandora brought in $100 million in mobile revenue in its 2012 fiscal year, according to the company. But the company still deals with the reality of the high royalty charges it must pay to let its users listen to songs. As a result, the more it increases usage, the higher its expenses grow. It also has to combat the fact that mobile ads typically bring in considerably less money per ad than desktop ads.