Consumers Shift Slowly Toward Apple in Battle Against Feds

New Data Shows Americans May Be Changing Tune
READ THIS NEXT
TikTok tactics: What to know about reaching audiences on the social media platform 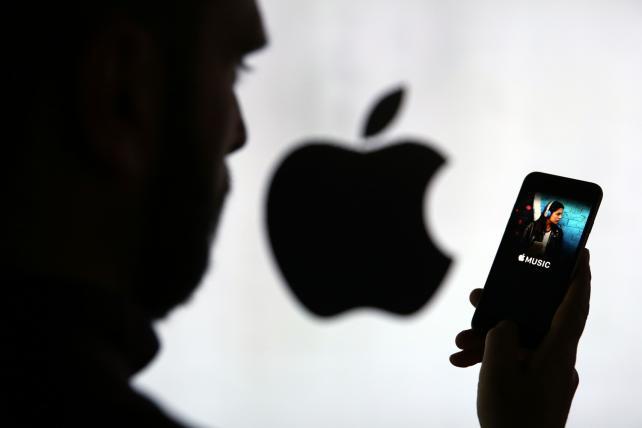 Apple for years has been the brand all other brands envy. It's been called the most valuable global brand multiple times, according to Millward Brown, and it's a case study in brand loyalty.

So when the company's dispute with the U.S. Government heated up in February, questions arose as to whether the brand would suffer. At the center of the debate, of course, is Apple's refusal to cooperate with the government over an encrypted iPhone used by Syed Rizwan Farook, who, along with his wife, is suspected of killing 14 people in the Dec. 2 terrorist attack in San Bernardino, Calif.

Early polls, like the one released by Pew on Feb. 22, said that 51% of people polled felt that Apple should assist the FBI in unlocking the phone. At that time, 38% of people said the company shouldn't acquiesce.

But the tide may be turning for the company when it comes to public opinion. For one, it has gotten strong support from the Silicon Valley cohort, including backing from Google, Facebook, Twitter Microsoft and many others. 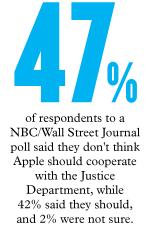 Perhaps more significant, the brand perception hasn't taken a hit since CEO Tim Cook publicly took a stance against the government. According to data released by YouGov's BrandIndex, "Apple's public battle with the FBI to gain access to the San Bernadino shooter's iPhone has not impacted the electronic company's brand in a statistically significant way," said the company in a blog post Monday. The blog post also said that there was "no meaningful movement" in perception among Democrats and Republicans. The same goes for Apple customers. 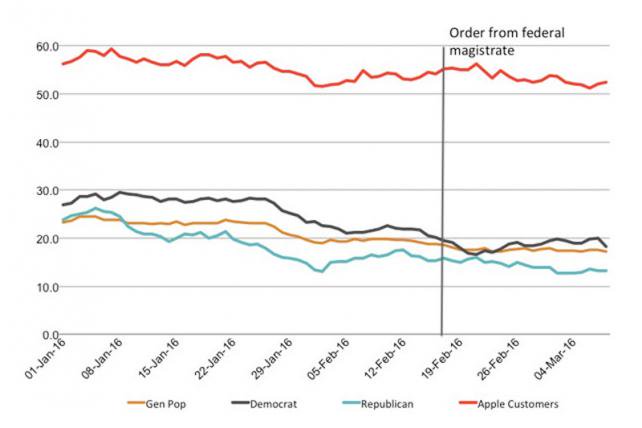 Apple Brand Unaffected By Battle With Government Over iPhone

To measure perception, the BrandIndex asks respondents: "If you've heard anything about the brand in the last two weeks, through advertising, news or word of mouth, was it positive or negative?"

In the Wall Street Journal/NBC poll, which was conducted March 3 through March 6, 54% of the 1,200 registered voters surveyed said they have a positive view of Apple, and 14% have a negative view. It doesn't say, though, whether that view has been affected by Apple's issue with the government, and Google and Apple were only recently added to the poll's question about general feelings toward a figure or group.

Google was the only company in the survey pooled higher than Apple, with 67% of people reporting a positive view of the company. Comparatively, only 25% of people responded positively toward Donald Trump -- who tried to make an issue out of Apple's refusal -- and 64% responded negatively.

It's likely this fight against the U.S. government isn't going to end anytime soon, and support from not only Silicon Valley but also U.S. citizens will likely continue to be critical.