Pepsi's Frank Cooper Wants to Unlock the Meaning of Data

The massive influx of consumer data is changing the ways marketers at all levels do their jobs, including Frank Cooper, PepsiCo's CMO, global consumer engagement. In a recent conversation with Ad Age , Mr. Cooper shared some of the most significant ways the data flood is affecting how Pepsi connects with consumers. 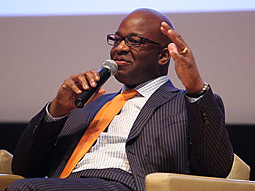 "Increasingly all of us -- at Pepsi in particular -- we have to bring in that capability of ingesting data … teasing out insights but then iterating our actions," he said via phone from Istanbul, Turkey on Monday. There are fewer than a dozen people in the consumer engagement team who work with data, Mr. Cooper said, suggesting that Pepsi may continue expanding its data staff and resources.

Gatorade's Mission Control -- the PepsiCo brand's physical space dedicated to monitoring and engaging in social media -- "was prompted by this feeling that we were just too far removed from the data and our reaction time was too late," he said. An actual physical social hub for the Pepsi brand may come about eventually, said Mr. Cooper, but for now, "It's more about having a collection of people reviewing data in-house and entering into the conversation."

Measure what matters
"We tend to measure what we can count rather than measuring what really matters," he said. "We need to measure how people are becoming involved in brands, how people are advocating on behalf of brands. We're figuring out ways to synthesize the data we have," he said, noting Pepsi looks at information from a variety of sources like YouTube, Google Analytics, Nielsen, social TV analytics firm Bluefin, Oracle's social conversation analysis company Collective Intellect, geospatial data management and visualization firm GeoIQ, as well as online survey research and proprietary platforms.

Despite that defined goal for dealing with data, Mr. Cooper said he believes Pepsi is "at a disadvantaged position" compared to retail marketers or credit card firms with access to transaction data that can be more readily tied to marketing efforts and consumer touch points. "The only way we can create a feedback loop is if people opt in and participate in it," he said.

Mobile data
However, Mr. Cooper did acknowledge that one platform in particular is helping Pepsi connect the dots: mobile. "The last point of contact used to be radio," he said. "But as a shopper goes into the store they will have some mobile device with them and there are ways for us to connect with the shopper" through those devices and by providing more information via mobile, he added. While QR codes are often used by CPG brands to link their physical products to mobile experiences, Cooper suggested that location recognition technology is "more interesting." He envisions the Pepsi logo or some other symbol connecting people from packaging to prizes or offers. "You don't have to worry about the code -- you worry about one symbol that becomes the unlock," he said.

"Sites like Pinterest and Instagram are helpful in building that adoption," continued Mr. Cooper, referring to cameras on tablets and phones as "connection points." Pepsi has a "something in development" for Pinterest, said Cooper, declining to share any more information about the project. "Pinterest skews heavily female and that presents a unique advantage for some of our brands," he said, adding that becoming more "platform agnostic" is a broader strategy for Pepsi.

Branded content
Working with partners to produce branded content is part of that quest. "It's not just super crunching the data and the numbers; it's also developing content and entering conversations," Mr. Cooper said. For instance, he noted that Pepsi-branded streaming concerts on Twitter throughout this year featuring Nicki Minaj, Katy Perry and others inspired commentary from fans and "the ability to capture data around what consumers really liked about it."