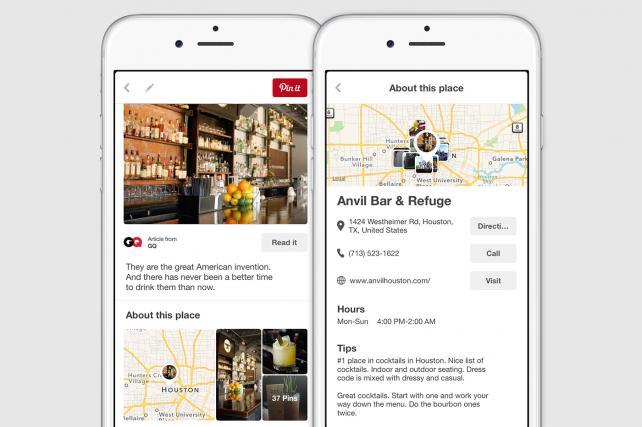 Place Pins will also suggest places users can visit near their detestation, like restaurants, for example.
Credit: Pinterest

Pinterest made a move Tuesday that will automatically capture location data from its 100 million-plus members who use its Place Pins service, a move that will likely generate additional revenue for the company and open more doors for marketers in the future.

Now, every pin will automatically show where it lives on a map, include contact information, store hours, reviews and directions. While the feature is nothing new -- Place Pins debuted nearly two years ago -- automatically adding location and other details to its 7 billion pins is.

The company is touting the feature as a way to enhance user experience; Pinterest said in 2013 that users pin about 1.5 million destinations daily. A Pinterest spokesman said Place Pins isn't for revenue right now, but hinted at possible savings for users through the image bookmarking service in the future.

"Since travel is one of the fastest growing and most popular interests on Pinterest, we'll continue to invest in making it easy for people to discover, save and take action on vacation plans, including leveraging new mobile capabilities for people on the go," the spokesman told Ad Age.

While the travel industry is certainly lucrative -- the World Travel and Tourism Council said tourism captured 9.5% of the global GDP, or about $7 trillion in 2013 -- marketers are pointing to other potential revenue streams Pinterest can achieve by automatically capturing location data.

"I think this is going to be great for marketers," said Adam Epstein, president, COO, adMarketplace. "Now, by default they are going to be collecting geolocation data. They are already collecting user-intent data. Both of those can be used to set themselves up nicely in the performance marketing space."

Financial service companies who want to advertise on Pinterest might target users who have been to Hawaii recently, for example. About 47% of active Pinterest users are more likely to experience a major life event in the next six months and 83% said they purchased something -- not necessarily from Pinterest -- because they were on the site, according to a study by Millward Brown done in partnership with Pinterest.

"Marketers want to have choice and options when distributing their marketing budget," Mr. Epstein added. "They have a ways to go in terms of monetization, but they are making the moves for performance marketers to spend budgets visually. Which is huge."

"When you have location data at scale -- think Twitter, iPhone -- it is private information that is protected," said Tony Longo, CEO of Ground Signal, a location-based audience platform. "Nobody is selling this data. I can't go to Pinterest and say give me all your analytics. There is immense value for Pinterest to keep this information private in their own stable and work with marketers directly."

Mr. Longo said he could see Pinterest eventually using the location data to trigger someone to walk inside a Bloomingdale's because the user was near the store and had pinned a dress to their board the retailer has.

"When you couple personality insight and location data, the marriage of those two cannot be done by a lot of people," he said. "Nobody is walking around with a ground signal app with 100 million users around the world. It will be interesting to see how this plays out in 2016 and beyond."

Tuesday's move is just one of many made in 2015 that could possibly generate additional revenue for the company in the future.

Recently, the image bookmarking service more than doubled the amount of Buyable Pins on its platform to 60 million. They also added thousands of new merchants with the addition of three new e-commerce platforms in Magento, IBM Commerce and Bigcommerce.

In March, the company named Tim Kendall as Pinterest's first general manager of monetization. That move was followed with an announcement in May that introduced services tailored toward marketers such as an in-house creative and cinematic pins.

Pinterest is getting its location data pulled via Foursquare API. Place Pins' latest feature is only available to iOS devices, with plans to bring the feature to Android and desktop in the future.