Service for Brands and Bloggers Includes Tally of Impressions Inside Pinterest
READ THIS NEXT
TikTok tactics: What to know about reaching audiences on the social media platform

Pinterest today became more measurable to brands and bloggers alike by launching web analytics that shed light on how images shared there resonate with users.

Available to any account that's gone through the automated verification process on its web site, Pinterest's new analytics tool lets accounts track how many people have pinned content from their sites, how many people have visited their sites from Pinterest, and how many Pinterest impressions their content has generated. It will also show a selection of the most recent pins captured from their site and the content that's been re-pinned and clicked on the most within Pinterest. 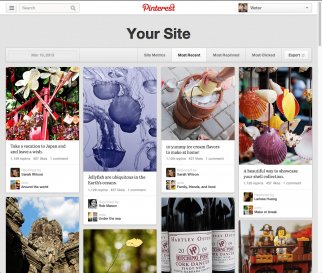 Marketers are keen to know what content is popular on Pinterest, since it gives them a window into consumers' ever-changing preferences.

For example, for marketing purposes, a retailer might want to know that red is the most popular color of a particular style of shirt. But in the past, it would have had to work with a startup like Curalate or Pinfluencer that scrapes Pinterest data to get analytical insight into its content's performance. Pinterest hasn't yet opened up an API that would allow developers to build applications on top of the service, and harvest the data.

Cat Lee, Pinterest's product manager for platform, said the idea is to help brands with their content strategy. Now they can see which pins are popular on a given day, for example, and highlight those on their website to juice Pinterest sharing even further. She acknowledged a continuing opportunity for startups that can do custom integrations with brands, helping them map out the connection between their Pinterest presence and sales, for example, and execute contests and promotions on the platform.

"There will continue to be a need for the companies that provide an even deeper level of services for businesses," she said.

Curalate's CEO Apu Gupta said he views a Pinterest analytics product as a boon to small businesses instead of competition for his company, which is focused on charging big companies for Pinterest analytics. (Pinterest's own product is free.)

"Pinterest is driving material revenue to small brands, and they don't have the means to afford some of the more robust solutions that are available to enterprises," he said.

However, companies specializing in Pinterest measurement may need to evolve their feature set to keep the business of big brands. Hearst Digital was among the publishers beta-testing Pinterest web analytics over the last weeks, and its director of audience development and social media Ross Geisel said his team was still on the fence about whether to keep working with a startup. (Hearst has tested both Curalate and Pinfluencer.) There's something to be said for getting data direct from the source, he said.

"The other services are scraping that content," he said. "So far as the analytics trust factor, I feel more comfortable with the numbers I'm getting from Pinterest."