Social Network Teams With Funny or Die, YouTube Star Michelle Phan on Halloween Push
READ THIS NEXT
TikTok and Shopify partner to link ads and e-commerce

Pinterest is rolling out its first co-marketing campaign on Monday to promote a new editorial product called Pin Picks. The social scrapbooking service has partnered with roughly 10 media companies, including eHow and Funny or Die, as well as YouTube star Michelle Phan.

Pin Picks are topic-specific collections of pins and Pinterest profiles that the company has been testing since August on its desktop and mobile sites. NFL team the Seattle Seahawks and ESPN used the product to create a program around tailgating football games. More recently, HGTV created one called "Home Hacks" to talk up DIY projects.

Now Pinterest is raising the profile of Pin Picks with a four-week campaign tied to Halloween. The company's head of brand, David Rubin, said it chose Halloween for the campaign because "Halloween is one of the more important times in Pinterest's year." He said the service counts more than 176 million Halloween-related pins.

"People are going on Pinterest to get ideas for what to do with their costumes and events and activities," Mr. Rubin said. 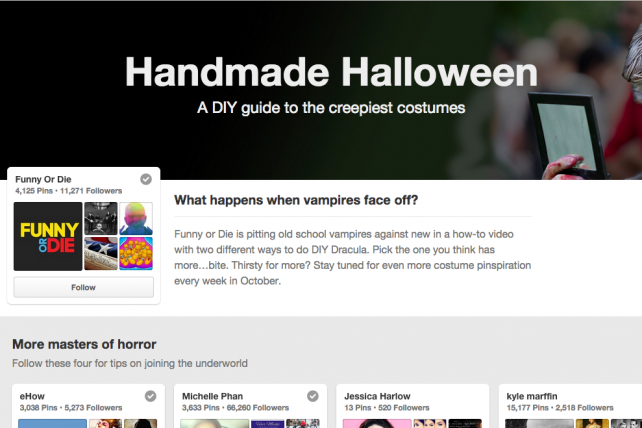 The campaign will have four weeklong themes: horror, villains and superheroes, humor and last-minute ideas. Funny or Die and Michelle Phan are taking part in the horror phase; comedy site Cracked will be involved in humor; and EHow's participation will span all four themes.

In addition to the Pin Picks collections, Pinterest and its media partners have created a series of how-to videos for the campaign. Pinterest's internal team created one of the videos, which will be distributed on its YouTube channel.

"As we look to recruit and show use cases for audiences not on Pinterest today, YouTube is a healthy platform with people looking for tips coming over to Pinterest," Mr. Rubin said.

Pinterest will purchase some ads for the campaign, but Mr. Rubin said the effort's paid push will be "a pretty minor part" and characterized it as "a tiny bit of testing." Those ads will span social and video properties, though he declined to say which ones.

Pinterest did not work with any outside agencies on the campaign.

Pinterest has been stepping up its work with media companies lately. In August, the company updated its analytics tool so publishers can view more details about their Pinterest audiences -- like where they live and what topics they're interested in — and see how much traffic the social network is driving to their sites. Last month Pinterest hired former Google ad sales exec Robert Macdonald to manage its media partnerships.

"What we're finding is not only that the content [media companies] create is helpful to us, but Pinterest has grown into being a place where we're driving lots of traffic and interest back to them," Mr. Rubin said. BuzzFeed has said that Pinterest is now its second-biggest traffic driver behind Facebook.