Mobile advertising is growing exponentially, but that doesn't mean it's not without its problems.

For one, its vaunted location data isn't always accurate, and two, the software cookies that help track web surfers on desktop computers can't follow users from app to app. Factors like that make the mobile world ripe for ad fraud.

But ad-fraud prevention firm Pixalate is hoping to shine a light on the problem with its new Mobile Seller Trust Index, which it describes as an independent, standardized rating system of ad exchanges' fraud activity.

"There's a huge lack of trust because of some of the malpractices in the industry, and we're trying to help the industry establish trust," said Jalal Nasir, CEO of Pixalate."We've seen that in the last three to four months there's more fraud happening in mobile than on the desktop side."

Mr. Nasir said that the supply-side in-app mobile ad space has become a "minefield," with about 38% of mobile app ad inventory being fraudulent, which leaves buyers in the dark on what ad exchanges are trustworthy. On the desktop side, he estimated that about 27% of inventory was fraudulent.

Perhaps not surprisingly, Amobee is a supporter of the index. "The integrity of mobile in-app inventory, data quality and accuracy is imperative," says Rujul Patel, senior VP-global publisher solutions at Amobee, in a statement. "MSTI is a positive step forward for our industry that needs to operate with transparency and accountability to guarantee an optimal way to reach consumers on mobile." 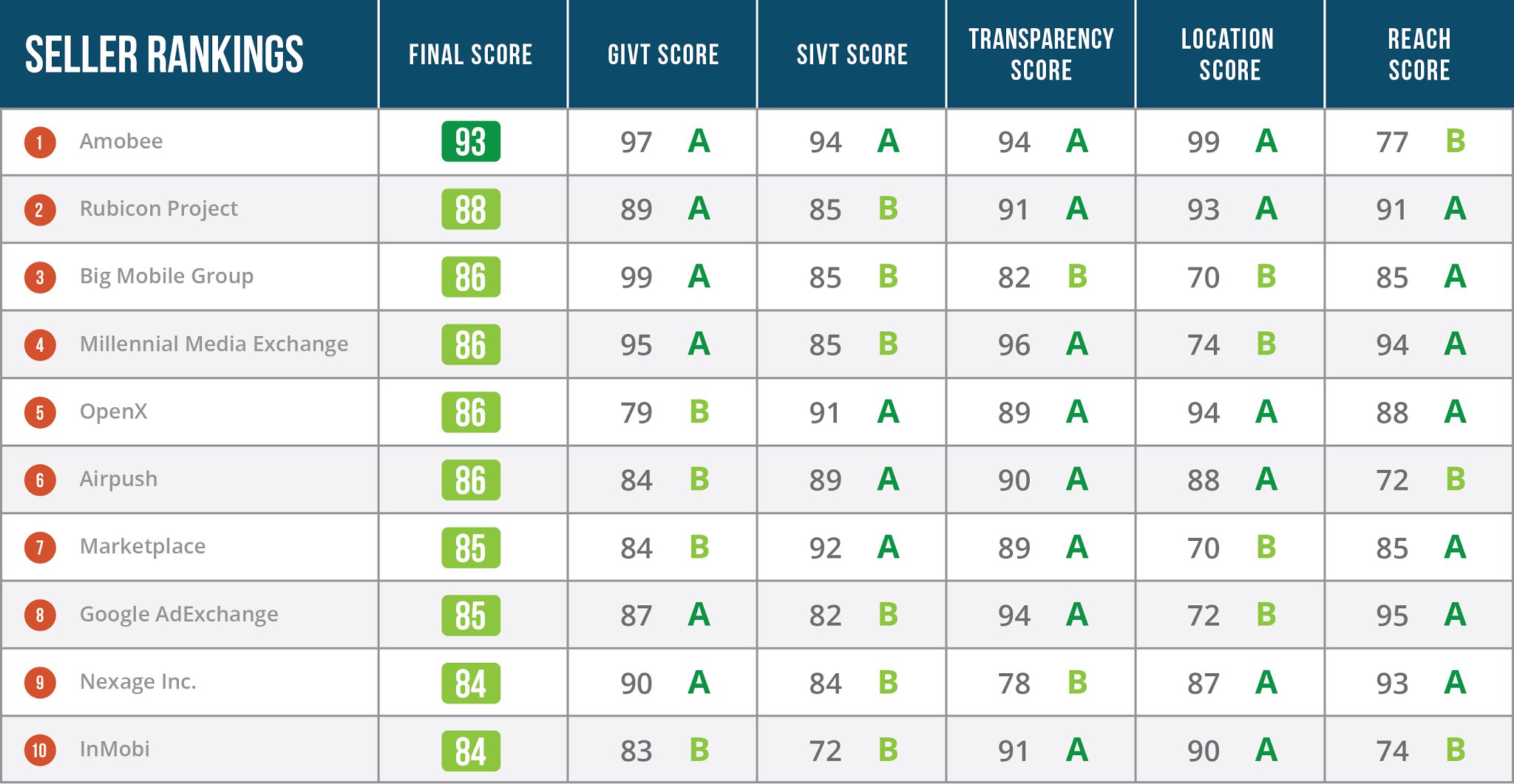 Other exchanges might not be so approving. The full index, which Pixalate plans to update each month, can be seen here. The company introduced a similar index for display ad quality in the desktop and mobile web in December.

Fraudsters make money by creating non-human traffic and selling it to publishers, or by selling ad inventory that rings up impressions but goes unseen by humnan eyes.

The need to sort out mobile ad fraud, particularly in apps, is becoming more critical as mobile users and advertiser alike flock to apps. Marketers will spend $20.8 billion to reach consumers via mobile apps in 2015 but only $7.9 billion on mobile browsers, according to projections by eMarketer. When mobile spending surpasses desktop advertising next year, eMarketer says, app ad dollars will reach nearly $30 billion, compared with the mobile web's $10.8 billion.

Mobile users these days spend the majority of their time in apps. Apps account for about seven out of every eight minutes of media consumption on mobile devices, according to ComScore's U.S. Mobile App Report.

Pixalate says its ratings are based on factors such as reach, or the number of unique users available on the seller's platform; "general invalid traffic," defined by Media Rating Council guidelines as "data-center traffic, bots and spiders or other crawlers masquerading as legitimate users"; "sophisticated invalid traffic" as defined by the MRC guidelines, which cover "hijacked devices, URL spoofing or falsely represented impressions"; transparency, or the availability of device and user information; and the precision and availability of location data.

More than half of the in-app mobile ad inventory on exchanges does not offer device ID information, according to Pixalate. Apple and Google have introduced ways to track users across apps, but the ecosystem still contains large gaps for fraudsters.

Location data meawhile makes for easily created fraud because, among other things, the data may not be nearly as recent as many marketers would want it to be, and often multiple false locations are assigned to the same device. Mr. Nasir said that the impetus for location data fraud is that often advertisers will bid up to five times as much for data that has a location assigned to a device's IP address. Pixalate found that only 30% of inventory surveyed had location data, and only 60% of those provided accurate location.

Another troubling finding, according to Pixalate: More than one-third of the in-app fraud seems to come from data centers, indicating dedicated operations are creating mobile app "simulators."

When asked whether any of the exchanges are aware of the amount of fraud being committed in general, Mr. Nasir said, "They don't publicly admit that, but they are aware it's going on."

The firm in June unveiled a sort of Brita filter that is designed to sift out fraudulent traffic before an advertiser had a chance to buy an ad against those impressions. Dubbed Pixalate Security Threat Intelligence Dome, the filter works for desktop and mobile web.