Not Even Twitter Knows When Brands Should Stop Tweeting

You could take America's temperature on Twitter, and sometimes it's just too hot for marketing.

This week, for example, is proving to be a risky time for brands to use Twitter to share a silly meme, playfully "clap back" at a customer or riff on a made-up holiday. The platform has been filled with outrage and terrible news since white nationalists and supremacists clashed violently last Saturday with opponents in Charlottesville, Virginia, and President Donald Trump blamed "many sides."

Of course, it's hard for brands to know exactly when to steer clear. Even Twitter can get it wrong. Just look at how Twitter's marketing team asked users on Tuesday how they're spending "National Relaxation Day."

Another person, referring to the rally that had been planned for Saturday (but was called off as police lost control), said: "Hey remember when you let white supremacists organize a rally using your website and then one of them murdered a woman?"

"The comments are priceless," says one social media agency executive, who spoke on condition of anonymity to critique Twitter. "It's basically Twitter being tone-deaf on their own platform."

Twitter has never really been for people who shy away from politics and news, and the sometimes-harsh landscape has been a drag on its expansion. Just as its relevance was being reaffirmed daily by the ultimate power user, the president of the United States, user growth last quarter declined in the United States from a year earlier and stalled worldwide. Ad revenue fell as well.

The fallout from Charlottesville has simultaneously underscored Twitter's vital role in the national conversation. And former President Barack Obama had the most-liked tweet in history this week:

"No one is born hating another person because of the color of his skin or his background or his religion..." pic.twitter.com/InZ58zkoAm

"Twitter is tapped into, and is powered by, the zeitgeist," says Noah Mallin, managing partner at MEC Wavemaker North America. "Nimble advertisers know that sometimes that means dialing down and then dialing back up again. When the conversation is on the Country Music Awards or baseball, you still want to be where there's conversation and action."

It's unclear how the past few days of heated conversation on Twitter have impacted advertising and brands' activity there. There are no official stats that track ad spending day to day, and Twitter declined to comment for this article.

However, a number of advertising and agency executives said that they advise brands to avoid Twitter during the most politically charged times. All platforms have brand safety concerns, they say, but brands on Twitter are particularly vulnerable to being caught alongside the news and politics of the day.

On Facebook, for instance, the News Feed has its problems with fake news and toxic comments, but the service is not as tied to the daily news cycle, agency and advertising execs say. On Snapchat, brands are not observed alongside news items as publicly as they are on Twitter. And Instagram is less political than all of them.

The social media executive, who had spoken on condition of anonymity, shared examples of brands seen advertising on Twitter over the past few days. The ads were poorly placed.

One Promoted Tweet from Monster Energy featured Conor McGregor, the mixed martial art fighter who will box Floyd Mayweather this month. On its own the ad would be fine, but the promotion around the fight was already racially charged. Its appearance amid frequent discussion of white supremacists could be considered a dicey look.

"We closely monitor positive and negative cultural moments," the social media agency exec said. "We recommend pausing media when the message appears tone deaf, or has little chance of making an impact in a noisy feed."

Another brand, Outsite, a co-working and co-living startup, was met with ridicule for a Promoted Tweet, because a Twitter user thought the photo in the ad lacked diversity. It might have gone unremarked in a less freighted atmosphere.

"Either you're a whites-only club or you need to rethink your ad imagery," the tweeting critic said.

Outsite, which did not return a request for comment, did reply on Twitter, saying: "Really appreciate the feedback here, and we'll definitely be reconsidering using this photo in future ads." 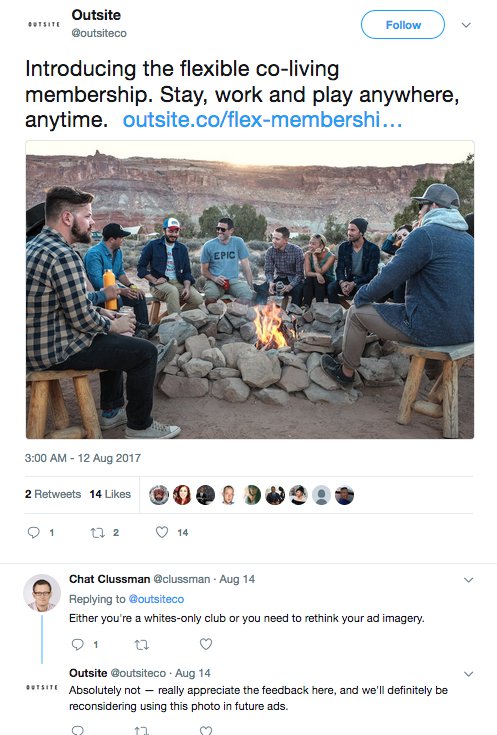 A Promoted Tweet from Monday was criticized for not featuring more diversity.