Profits Way Up at China's Tencent As WeChat Goes Global

The company on Wednesday also reported a jump in users of WeChat, a fast-growing and easy-to-use social app that blends aspects of WhatsApp, Facebook, Instagram and Skype. Now 396 million people use WeChat every month, up 12% from the previous quarter.

Of the world's Internet companies, Hong Kong-listed Tencent is the fourth biggest by market capitalization, after Facebook, Google and Amazon. The company's rivalry with e-commerce giant Alibaba has heated up competition and innovation in the Chinese tech sector, and the past quarter has been a busy one for Tencent: It announced it was buying a 20% stake in Dianping (China's Yelp) and a 15% stake in JD.com, an e-commerce company that, like the much larger Alibaba, is planning an initial public offering in the United States.

Quarterly revenues were up 36%, reaching 18.4 billion RMB ($2.99 billion). The value-added services division, which includes mobile games and represents nearly four-fifths of revenue, reported a 35% increase from the year-earlier period. Growth was driven partly by smartphone games, including games integrated into WeChat.

Advertising accounted for only 6% of the company's revenues in the first quarter. One key difference between Silicon Valley and Chinese tech companies, as noted by CLSA analyst James Lee in a March note, is that "U.S. companies lead by a wide margin in mobile advertising, targeting and measurement, while Chinese companies master in selling direct to consumers through mobile games and virtual items." 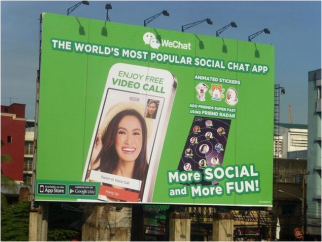 A WeChat ad in the Philippines

WeChat goes global
WeChat (called Weixin in China) is the Chinese app considered most likely to be an international player, and the company has been pushing it in markets including Southeast Asia and South Africa (below, see a WeChat ad for the South Africa market that pokes fun at Facebook founder Mark Zuckerberg.) Tencent did not provide a breakdown of how many WeChat users were outside China.

Besides WeChat, Tencent's offerings include news platforms, a Hulu-like video service, instant messaging, e-commerce and an Uber-like taxi app. While WeChat is popular among white collar workers (and it's now possible to link WeChat accounts with LinkedIn), its QQ messaging service is more widely used, including in lower-tier cities. QQ has 848 million monthly active users and is benefitting from increased mobile engagement, the company said.

A chart has been circulating on Twitter lately showing the company's reach. It ranks the world's biggest populations, in this order: China, India, Facebook, Tencent.