What to Know About the Promise and Perils of Mobile Metrics

It's an often-lamented reality in marketing that the most measurable medium of all -- online -- is also the one most awash in metrics that overwhelm rather than enlighten. But when it comes to complexity, nothing beats mobile metrics.

To start with, marketers need to track three major types of devices: smartphones, feature phones and a largish bucket called non-phone-connected devices that would include tablets and many of the latest portable gaming devices. Then different modes of usage (SMS, apps, the mobile web) need to be tracked, as well as both Wi-Fi connectivity and carrier connectivity. And to complicate matters further, every consumer doesn't behave the same way on mobile devices. Some people have never downloaded the game "Angry Birds," and adamant non-texters do exist. Why should a marketer care to enter this morass?

Mobile represents one of the most rapid cases of consumer adoption and behavioral change to date. Once people get a smartphone, they tend to dump their phone books, their cameras and their GPS devices. Suddenly they are living in an always-on world of information that is with them in the moment of truth for marketers: the point of purchase.

As Matt O' Grady, Nielsen's exec VP-media audience measurement, noted, "The mobile phone may be the last in line that influences before the purchase and it's possible to know if the consumer is actually in a store." Everything from mass-market couponing to commerce is transitioning to mobile devices. Marketers need to get a handle now on the vast array of data that sheds light on usage and ad performance before it all gets away from them. 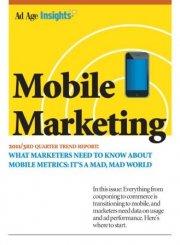 This third trend report in Ad Age Insights' Mobile Marketing quarterly series explores how to use the metrics currently available to figure out a mobile strategy. Buy the series, or just this issue, at AdAge.com/whitepapers

The third report in Ad Age Insights' Mobile Marketing series explores the types of research and surveys that are helping to uncover how people are behaving on their mobile devices, as well as how marketers can use them, and which companies are delivering the numbers.

The rapid pace of change has left many in the marketing world on the sidelines of mobile metrics. It's also led to a spread of misinformation through endless conferences and the hype -o-sphere of venture capital. For example, a major agency executive declared that 50% of people in the U.S. have iPhones (as of May 2011, it was more like 5%, according to ComScore, while iPhones represented 27% of the smartphone market as of May, according to Nielsen).

No consensus has been reached as to what to measure. In the app frenzy of 2010, the "download" was the most frequently cited metric, but often little measurement is available at all. A widespread belief exists that these data are locked up by carriers and the individual manufacturers, inaccessible to agencies and marketers. This is also not true.

Ray Pun, Adobe's senior product marketing manager of mobile, noted at a recent Mobile Marketing Association conference that he could only recall one presenter, an executive from the National Hockey League, actually using metrics to show the impact of a mobile initiative. For most marketers who have used mobile campaigns in the U.S., just being there has been enough.

Measurement is the rational basis of the business of any medium, and if mobile is indeed a new medium and not just a mode of communication, mobile metrics have to grow up, and marketers, developers, content producers and agencies have to start using them and even agree on what's important to measure. Currently, marketers and agencies need to patch together their own set of metrics to get at the data that works for them. But at a time in the not-so-distant future, metrics will need to be normalized across the industry-and connected with metrics from other media-so that meaningful planning metrics and measurement of a campaign's success can be broadly implemented. Mobile Marketing White Paper

Buy the series, or just this issue, at AdAge.com/whitepapers

Facebook looks within for its CMO, and Walmart's new stores have app appeal: Wednesday's Wake-Up Call