For years marketers have cited the success of 2-D bar codes overseas and eagerly waited (and waited) for them to take hold in the U.S.

Thanks to prominent endorsements from Target , Best Buy, Macy's and Post Cereals, that day might finally be nearing. Those marketers are placing the codes in front of a broad swath of consumers, while the likes of Home Depot, Visit St. Pete-Clearwater (Fla.) and even real-estate agents are using the codes on plant tags, tourism guides and home listings, respectively.

As the rectangular, pixelated codes become harder to miss, more and more consumers will explore them; meanwhile, major marketers are placing an emphasis on education, a key hurdle to adoption. Whether they'll catch on with consumers is still to be determined, but they'll be prolific enough to be judged on their own merits as a marketing vehicle.

Macy's is behind the most visible QR-education effort, with a 30-second spot now running nationally. The spot, which was cut down from a demo posted to Facebook, YouTube and Macy's own site, shows shoppers how to use the codes and explains what they'll get access to when they scan one with their phone.

The effort is part of Macy's Backstage Pass campaign, which uses QR codes -- or quick-response codes, a form of 2-D bar code -- and SMS texts to give consumers access to videos featuring star designers. It works like this: Shoppers download a QR-code reader, in this case one called ScanBuy. Then, using that reader, they snap a picture of the code, which triggers content to pop up. There are abundant in-store signs and employees are armed with more than 100,000 lanyards containing instructions on how to use the codes. 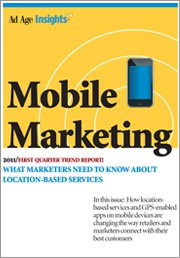 "We really felt that we needed to educate folks on this," said Martine Reardon, exec VP-marketing at Macy's. "They might not know what to do with it. It's important to tell them."

Though the campaign just launched last month, Ms. Reardon said views on the videos are already quadruple what was expected. "One could say the metric we put out there wasn't aggressive enough," she said. "But we know we're on to something." The Backstage Pass videos have attracted anywhere from a few hundred to a few thousand views on YouTube, with a video featuring Kelly Osbourne grabbing just shy of 3,500 views; the video demo of QR codes has snared 2,200 views.

And as the pace of campaigns picks up, mainstream-media outlets are giving marketers an assist on the education front. In Tampa Bay, Fla., local media outlets have been raising awareness of the codes, with TV anchors scanning them on air as they report on Visit St. Pete-Clearwater's latest campaign.

David Downing, deputy director at the tourism group, said the use of QR codes resulted in the most-successful sweepstakes campaign it's run. More than 20% of the 25,000 entries it received during a four-week period came directly from QR code scans. Mr. Downing said the group had hoped for 8% to 10%. The codes have now become ubiquitous in the group's materials, popping up on nearly every page of the Visitor's Guide.

"We know there's been a learning curve. And we know [2-D bar codes] have been out there and met with some mixed success," Mr. Downing said. "But it really does lend itself so perfectly to what we do. People are moving around a destination from place to place, and they want instant information."

Best Buy, a first mover in the space, added QR codes to all of its product-information tags in the fall. Though it's done little formal education around the codes, it's tough to miss them when you walk into a Best Buy store. Scanning the tag directs consumers to the product-detail page on Best Buy's mobile site. Over time those tags could also point to a video, product ratings or enable the customer to add the product to a wish list. 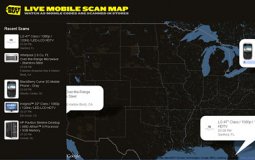 "It was a little bit of a bet. But it was a good bet to take," said Spencer Knisely, senior director of Best Buy's environmental-design group, of the decision to add the codes to its product tags. "We're fortunate now to see the market catching up. ... Retail is a great place for this. We think of [QR codes] as a personal shopping assistant"

Best Buy has also created a "Live Mobile Scan Map" at bbyscan.com/map which tracks the items scanned in stores across the country. Mr. Knisely said the company has even been experimenting with QR codes as a polling tool. A sign hanging in Best Buy headquarters asks employees to scan a code corresponding with how they're feeling. One code is positioned inside an image of a thumbs up, the other a thumbs down. When the code is scanned, employees see how many others are in a good or bad mood. Mr. Knisely says that sort of tool could be used to ask customers about their experience in the store.

It will also be hard to miss the codes in the cereal aisle, with Post's Honey Bunches of Oats adding them to more than 12 million boxes. The brand is banking on QR codes as the primary distribution vehicle for "Honey & Joy," a web-based sitcom that will premiere exclusively on Jesta Digital's mobile-web platform BitBop. Katie Lay, Honey Bunches of Oats' brand manager, cited research that showed the demand for QR-code experimentation outstripping the supply, particularly among the cereal's target audience of women ages 25 to 54. The brand found that a third of its target is looking for the codes, Ms. Lay said. 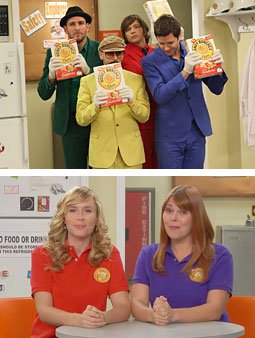 But even as the codes catch on, there's still a long way to go for them to have the kind of broad-scale adoption that major brands expect out of their marketing vehicles. And marketers are well aware, the campaigns are not foolproof. Poor internet connection, slow load times and outdated phones all contribute to an inconsistent experience for consumers. Persuading consumers to download mobile apps that can scan codes has been another major obstacle for QR-code campaigns, said Laura Marriott, CEO NeoMedia, a QR agency and tech company. That's assuming consumers already know what to do when they see the codes. And then there's the fact QR codes can seem like a hassle -- any extra step a campaign requires typically reduces response rates.

For those reasons, Julie Ask, VP-principal analyst at Forrester Research, says there's no rush when it comes to 2-D bar codes, though the environment is ripe for experimentation. "It's interesting. It's growing. And the analytics are good," she said. "There's no doubt that people are going to use their phones to engage more with the physical world. But there's a lot of different ways you can do that. ... Marketers are still mostly in the experiment stage and learning."

~ ~ ~
With contributions from Kunur Patel and Andrew Hampp