"We were building pages based on our needs and campaigns," said Tyler Bahl, global brand engagement-media manager at Reebok. "We wanted to make it about our consumers and how they use social media."

Mr. Bahl, who joined the company two years ago from Carat, said the goal has been to "clean up" Reebok's social presence. "When I was hired, [senior leadership] knew there was a problem," he said. "[They] took away the red tape so we could execute more efficiently." 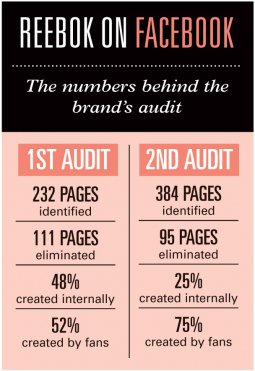 The first order of business was to conduct an audit. Mr. Bahl's team spent two weeks poring over Facebook, YouTube and Twitter to identify pages using Reebok trademarks. The brand identified company-created and fan-created accounts. The results of that first audit: 232 Facebook pages, along with roughly 100 YouTube channels and 30 Twitter accounts.

A case was made for why individual markets would gain fans and views if they eliminated local accounts in favor of global Reebok accounts. Some markets were hesitant. To get them onboard, Mr. Bahl allowed test posts on the global Facebook page and illustrated how related-video recommendations can juice views on YouTube.

Markets such as Hong Kong quickly realized their customers were already gravitating toward global accounts. Some local accounts, like India's Facebook page, with nearly 1.8 million fans, remain in place. Reebok whittled its overall social presence by roughly half in that first audit as it rolled up the majority of company-created accounts to focus on three Facebook pages, two Twitter accounts and one YouTube channel. It left fan-created content untouched. The brand also established a broader communications strategy, defining who could use trademarks to create accounts and for what purpose.

A second audit is now taking place, with the goal of further streamlining Reebok's social-media presence by the end of the year -- just in time for 2013 product launches.

"It's not like once you roll it up, people stop creating pages. We've put out policies but, as large as we are, we're not always able to fully get the message out," Mr. Bahl said, adding that a social-media handbook will be distributed by year's end. "The second consolidation is almost as big as the first. ... There were a lot of stragglers in markets that didn't see the vision or didn't have a digital person to execute [it]."

"Many agencies have come and said they can do this for us," Mr. Bahl said. "But our social confidence has risen by doing this process ourselves."