A first-person account from inside awkward 'It's A Live:' Not even Neil Patrick Harris could save me
READ THIS NEXT
Inside Facebook’s efforts to clean up the News Feed for brands 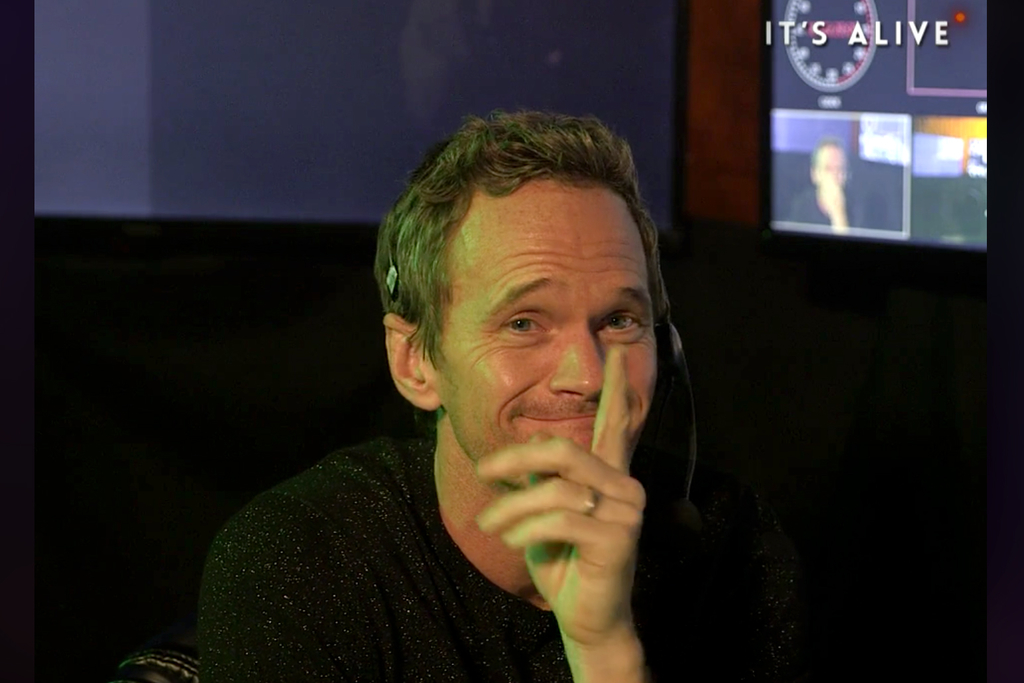 Halloween is the biggest holiday for Reese’s, not to mention parent company Hershey Co. In years past, Reese’s has crafted interactive events, like a vending machine where people could exchange Halloween candy for its peanut butter cups, to drive holiday engagement.

This year, Reese’s opted for another interactive experience—this time a live one, which Reese's described as "the most epic Reese’s Halloween treat experience to date.”

Reese’s nabbed actor Neil Patrick Harris to host “It’s A Live,” a Facebook Live event that streamed Oct. 24. The concept was promising: Harris would guide the paths of 32 selected guests through a haunted house based on real-time viewer votes. Those guests would have to find a key to escape two fright-filled rooms—a combination of “Sleep No More” meets haunted house meets escape room.

Unfortunately, the execution—created with Matador Content, CAA and Facebook Creative Shop—produced more laughs and awkward moments than scares. Even Reese’s admits the event did not go according to plan.

Reese’s began promoting the event in early October. Harris posted 11 videos to Facebook, as well as an IGTV video, hyping the event and asking fans what elements would be scariest to confront in the haunted house.

I participated as one of three media members—appearing at approximately the 36-minute mark in the Facebook Live video. Watch the hour-long video (if you can stomach it), and decide for yourself:

Prepping backstage
At the taping studio in Greenpoint, Brooklyn, participants, mostly influencers, are placed in groups of four. Media members are grouped together. Production people secure phones, have us sign waivers, distribute whistles (if we need rescuing) and blindfold us. We are brought backstage until told we can remove our blindfolds and enter the room with a blinking light.

The entrance
We step into a smoky hallway. There is no room with a light. An awkward minute passes before we finally see a light and head toward it. 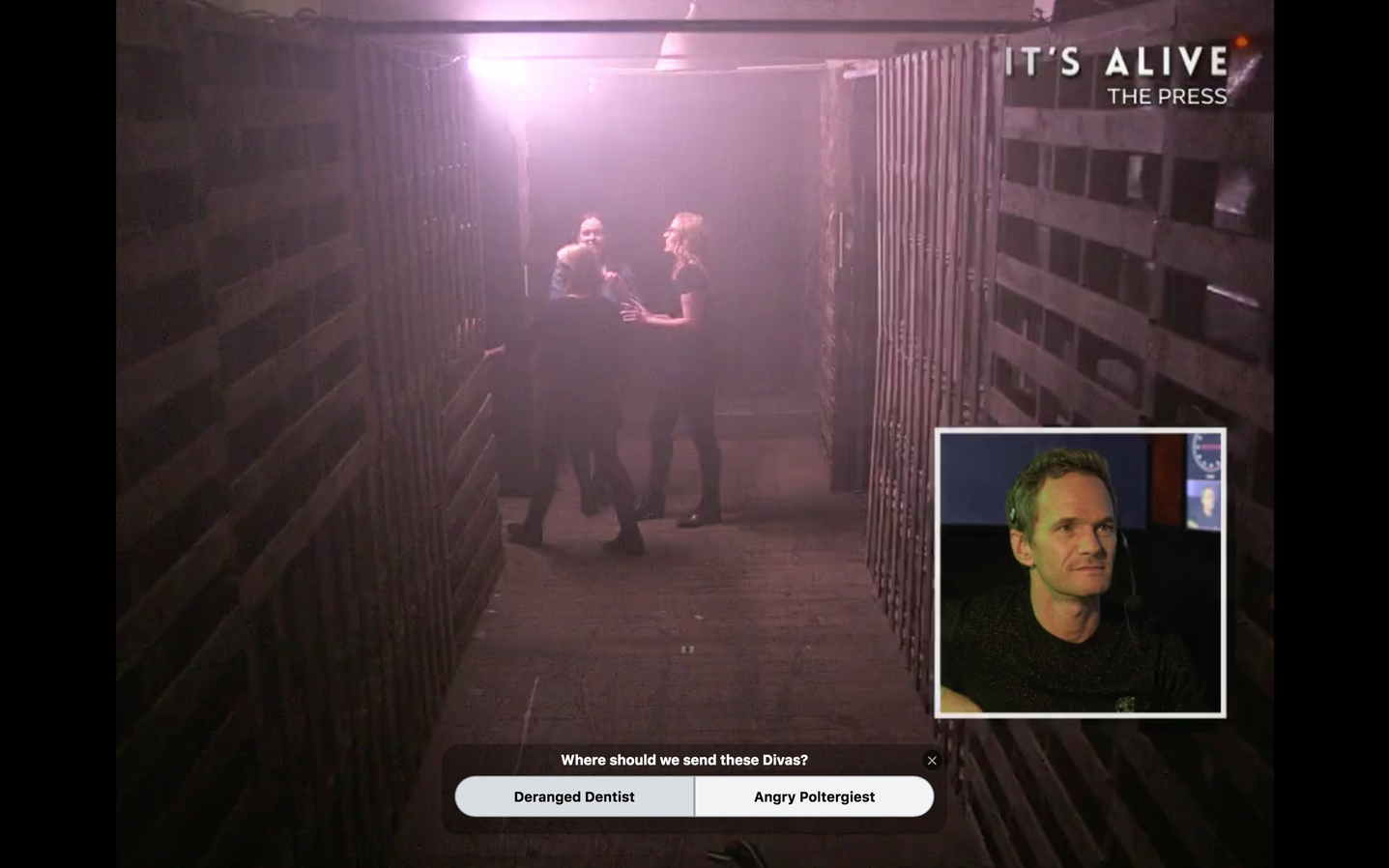 The experience
In the room we encounter actors costumed as ghoulish, bloody grandmas and grandpas, who begin hollering and encircling us. 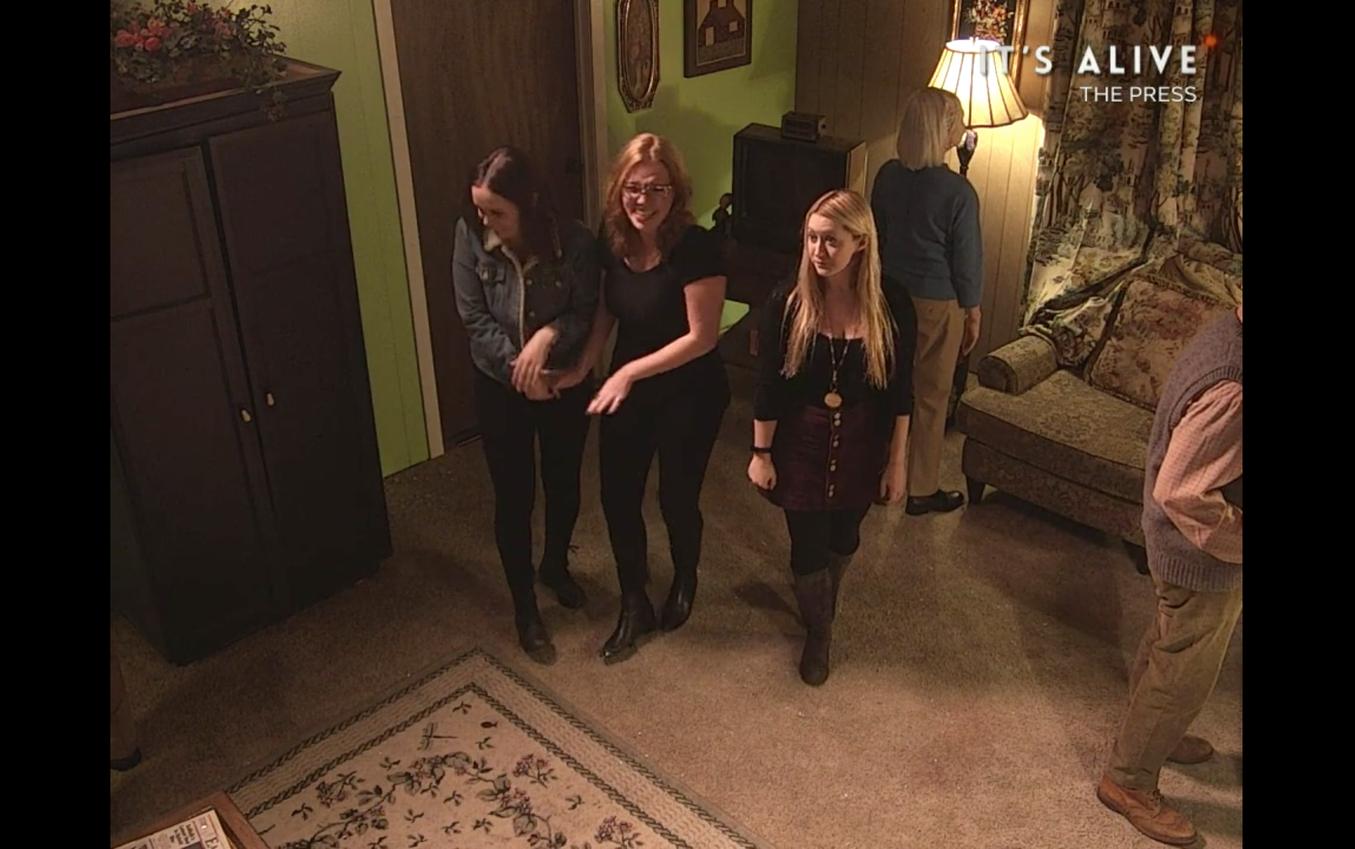 They bark at us to lie down and we reluctantly do as we’re told. Lights flash as the actors, shrieking and spouting nonsense, pretend to be grabbing us. Then they hesitate, uncertain what to do next. It was obvious there was no script for this. 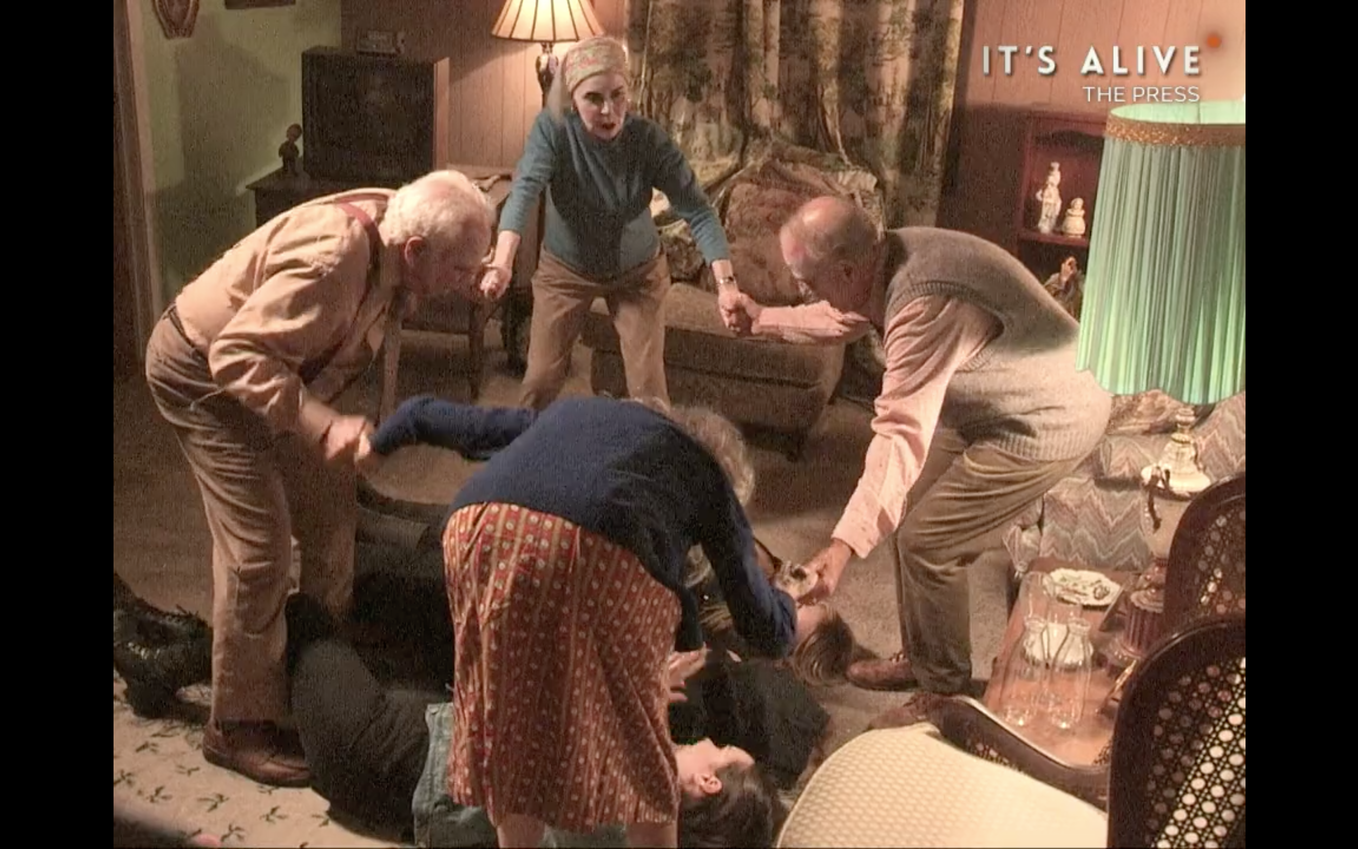 As we lay on the floor surrounded by seniors in too much makeup, Harris was in the control room, trying to control his laughter. “Someone give them a key, please," he pleads in the Facebook Live video. We are told to leave as the actors stare after us, utterly confused about what they are supposed to do. 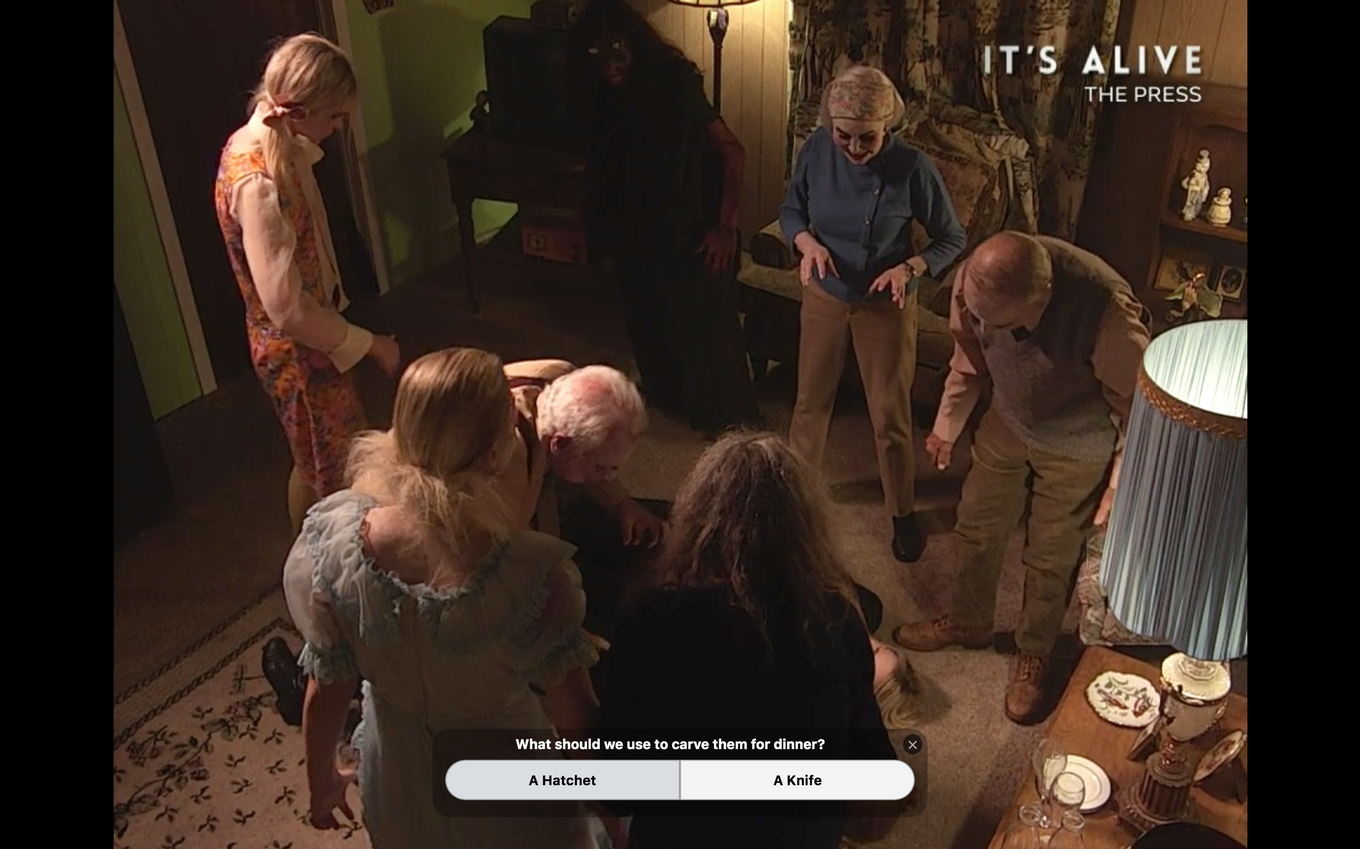 In the Facebook Live video, Harris has an incredulous look on his face. He tries to stifle a laugh and apologizes for our experience. I hope someone gave Harris a head’s up that the live event wasn’t going to be perfect. “Ok, that’s a little creepy … not scary though,” one viewer comments on the live feed. From another: “I would be 'Hell no, I am not laying down!'” 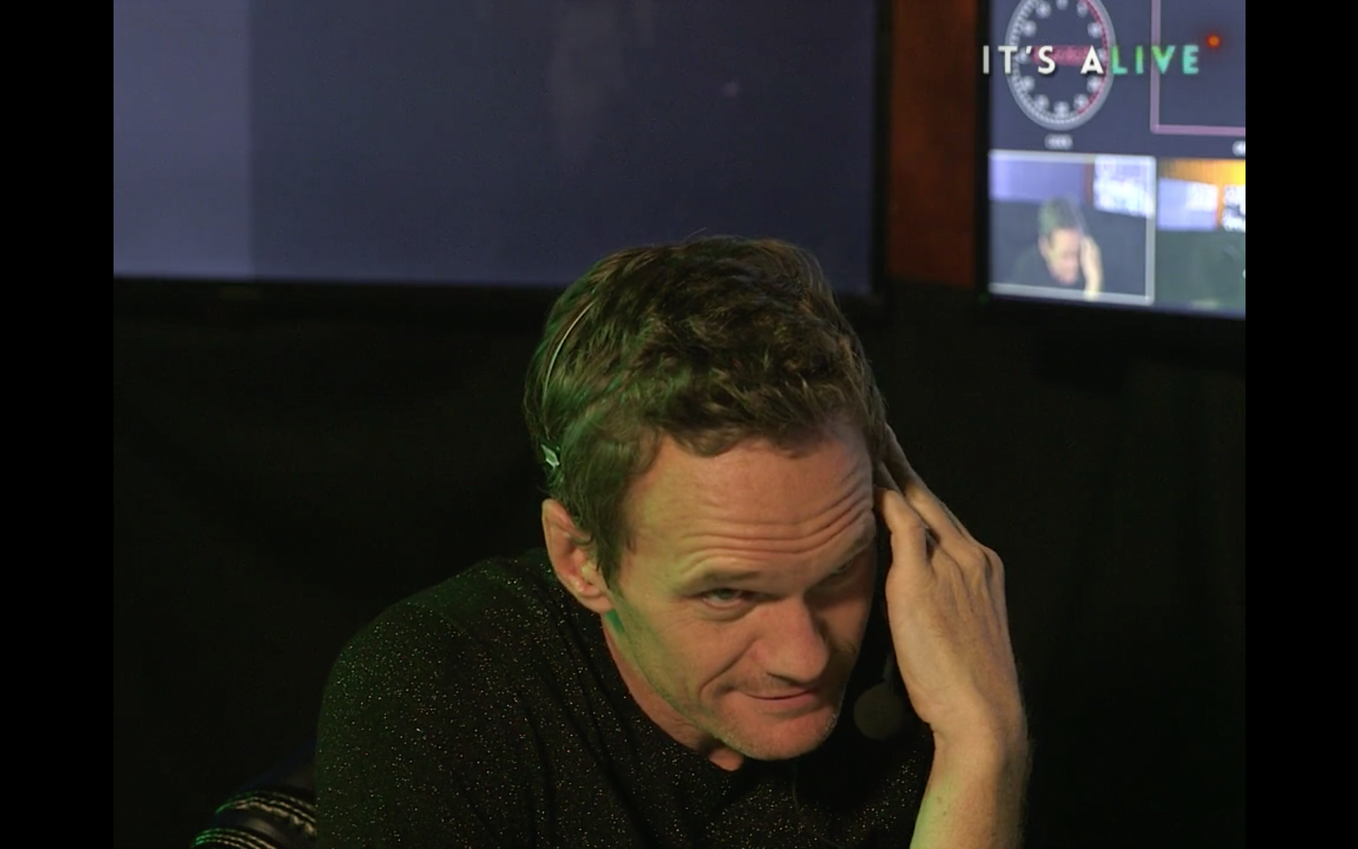 “Couple things,” Harris tells the camera. “That [room] was apparently cut and not rehearsed; so glad the media saw that … Huh, boy. You know what, we’re just going to send them straight to the treat suite because all we did was torment and traumatize them, and have old people yell at them which is horrible for many, but a lot of the scares that were supposed to happen, did not.”

The treat suite
We bypass other rooms and are brought to the Reese’s treat room, where a woman offers a tray of Reese’s cupcakes. We are perplexed. We went through only one room? Did we do something wrong? 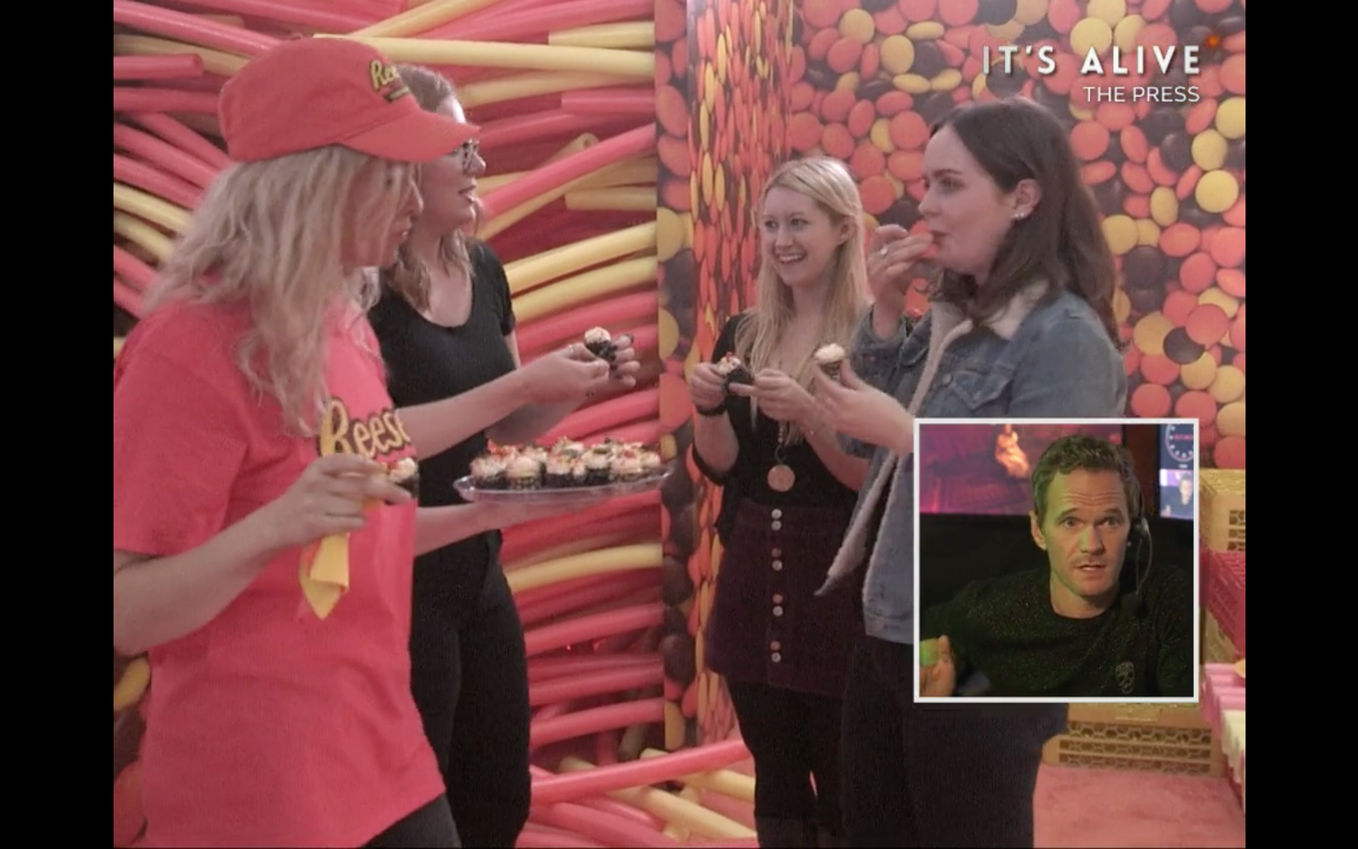 On the video, Harris continues: “Anyone in the media who is watching, this is our beta test. We are seeing how this goes, and every room is different. And yeah, sure, sometimes there’s a key, and yeah, sure, sometimes you’ll have to lie/lay on the ground, and have people just scream at you for a minute or two. But boy, what work we put into it as a whole, as a larger piece of entertainment, so thank you for coming and if any of you need a one-on-one interview afterward, I’m happy to give you an exclusive. We can talk about my Halloween costume for the family.” 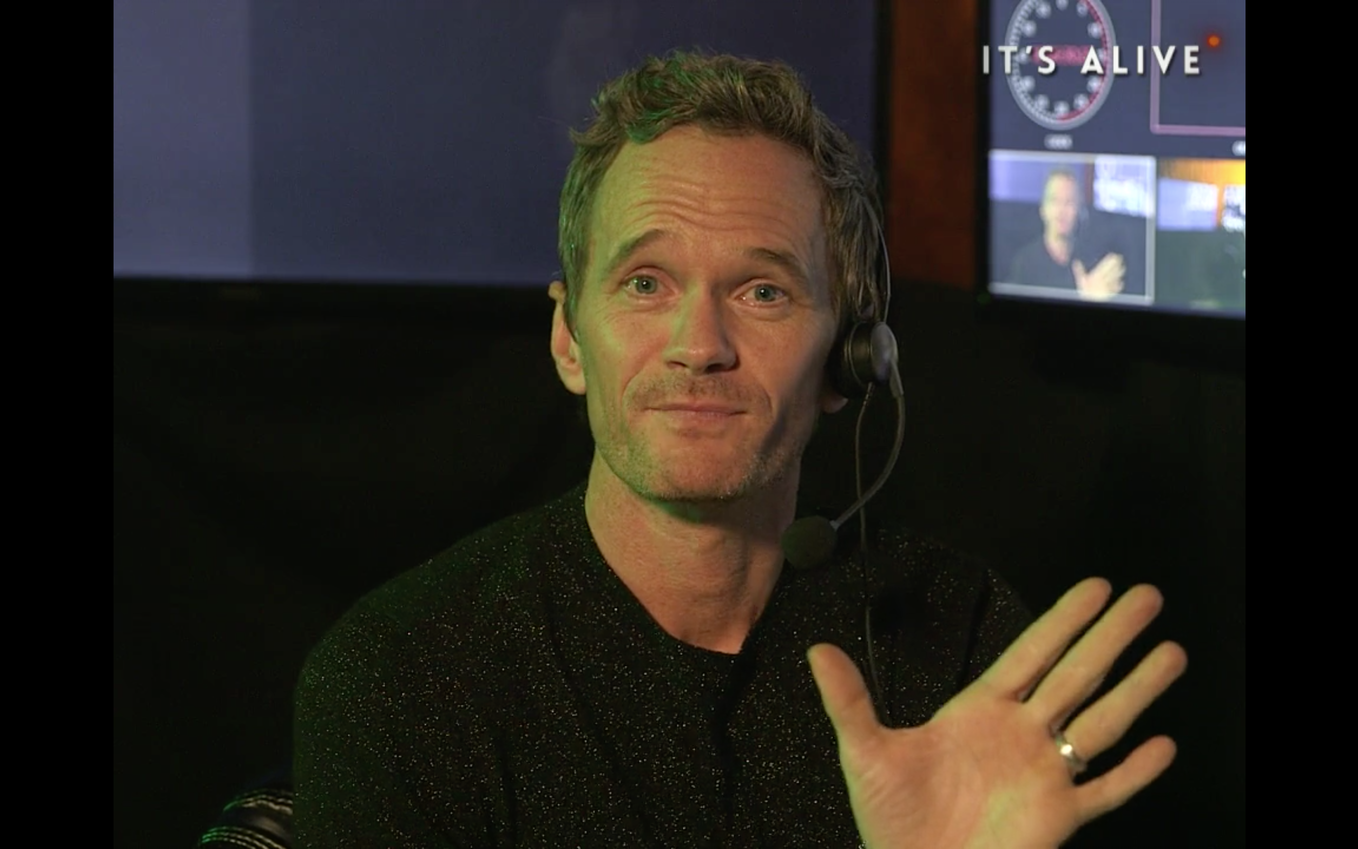 It's clear we weren’t the only group that felt shortchanged, although there were more screams from other rooms in the haunted house, which included a dentist's office and a séance. Harris, who did his best to brush off slipups, seemed to struggle keeping track of the groups.

The event also began 16 minutes late, the videography at time was poor, and some viewer suggestions—such as which weapons the actors should carry—were not implemented.

“We are always game for trying new experiences. And sometimes when you try something new, you have hiccups,” Anna Lingeris, earned media and brand publicity lead for Hershey Co. said on Friday.

“Neil said it last night; the experience didn’t go as planned. But the one thing we know is that everyone, including the participants and cast, had a great time in the Treat Suite. It was clear to us that no matter how scared people may have been, Reese’s—at the end—made it better.”