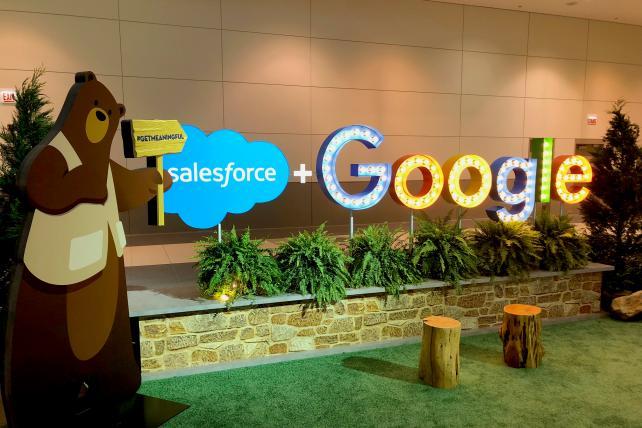 A display of the partnership between Google and Salesforce at Connections last week
Credit: George Slefo

Perhaps the most celebrated person at this year's Salesforce Connections annual event was not someone famous, well-known in creative circles or a highly touted CMO.

It was Kristin Bond, director of email marketing operations at Girl Scouts USA. Bond was sporting a shimmering gold hoodie awarded to her by Salesforce; only 26 of these are known to exist and they're highly coveted among attendees. "I really feel in my element here," Bond, 33, says. "Email is not dead. Social is not taking over; you still need an email to use those services."

Connections, held last week in Chicago, attracts thousands from around the globe each year, with many coming to see what the "No. 1 CRM platform in the world" has to offer. The marquee news this year centered on a partnership between Google and Salesforce that would allow marketers to activate data from Analytics 360 through Salesforce Marketing Cloud.

A demo shown on stage showcased a seamless integration between the two.

"We can build journeys with clicks, not code," Stephanie Buscemi, exec VP of product solutions marketing at Salesforce said. "Across email, ads, mobile and social, so that marketers can get across all the touch points."

Salesforce does not have a web analytics offering, so the company instead opted to make a deal with Google and its Analytics 360 software.

Previously, activating data from Analytics 360 was doable, but it was a cumbersome process that required users to deal with multiple interfaces, among many other things. But now, the two have merged into a single interface. A marketer from a consumer goods company can, for instance, view imported metrics from Analytics 360 on the Marketing Cloud dashboard. If they see certain products are getting frequently viewed, but not purchased, they can create an aggregated and anonymized audience of those users in Analytics 360, and then publish it to Marketing Cloud with a few clicks.

From there, the marketer can add that audience to what the company is calling "a re-engagement journey," offering additional information or discounts through email or mobile notifications.

"I'm intrigued, but I am skeptical about how easy the integration will be," Judy Ransford, CMO at Hickory Farms, says. "The way it looked in the demo [I saw] was impressive and I totally see the efficiency, but what I'm interested in learning next is how easy is that integration?"

"Everyone knows what good looks like, but execution is super hard," added Ransford who nontheless attributed a 10 percent sales lift to the company's Marketing Cloud during the holiday season.

Connections is a large, extravagant event. Attendees here were treated to a concert with "The Killers," who played just a few days earlier at Bonnaroo. Brands stomping the sprawling showroom floor watched demos of countless products that Salesforce offers.

"All of this looks incredible, and the level of efficiency it would bring is very obvious," said an attendee speaking anonymously. "But it's also very, very expensive. We have to question if this is worth the investment and if it is, how long will it take us to learn the ins and outs of the software? Do we have the right people? It's the type of decision the whole organization has to get behind if we're going to make it."

Bob Stutz, chief executive officer at Salesforce Marketing Cloud, dismissed the notion that integration would be a hurdle for any company, adding that "I beat the hell out of our team to make sure integration is very easy, so what you saw — a few clicks — is actually how integration will work."

Stutz agrees that previously merging Analytics 360 with Marketing Cloud was doable, but it was also clunky. "Typically what happens in a marketing department is if it is a pain to get something going, it ain't happening. We have a tight integration to use Google Analytics and Marketing Cloud in a way that nobody ever thought was possible. And a lot of our customers couldn't believe we could get it done."