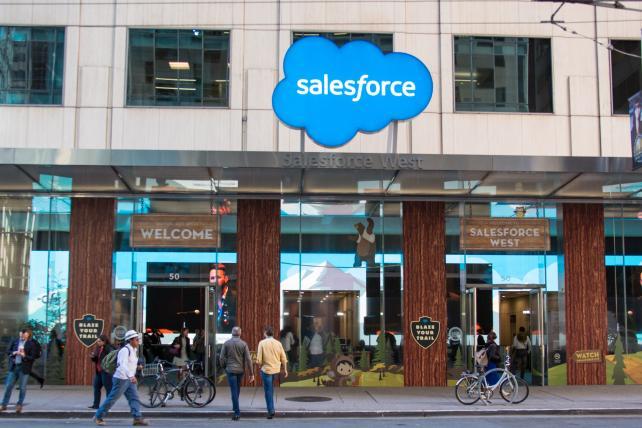 Salesforce gave a revenue forecast that topped analysts' estimates, signaling the company's expensive efforts to expand its software products and customer base may be paying off.

Revenue will be as much as $3.23 billion in the current quarter, the San Francisco-based company said Tuesday in a statement. Analysts on average projected $3.1 billion, according to data compiled by Bloomberg. The company also raised its full-year revenue forecast to as much as $13.1 billion.

CEO Marc Benioff has expanded Salesforce's ambitions beyond the internet-based software for managing customer relationships that made it an early leader in corporate cloud computing. The company bought MuleSoft for $6.5 billion -- its largest purchase yet -- in a deal completed in May to chip away at Oracle in integration software that connects various systems. The move, after Salesforce's forays into marketing and e-commerce products, is pitched at making the company an indispensable vendor for corporate clients looking to replace the traditional software they have long used in on-site servers.

The acquisitions have bolstered revenue, which Salesforce said climbed 25 percent to $3.01 billion in the fiscal first quarter. The company has promoted its expanding product portfolio to a bevy of new large and foreign clients in a bid to rival Oracle and Microsoft. Salesforce boosted its investments in Canada and France last quarter as part of its effort to compete in the world's largest economies outside of the U.S.

"The company continues to land larger, multi-cloud deals, which should help support upside to current estimates,'' Bhavan Suri and Sarah Shizas, analysts at William Blair & Co., wrote in a note before the earnings release. Salesforce has gained traction in health care, financial services and government industries, they added.

Billings, or deferred revenue, jumped 25 percent to $6.2 billion in the quarter ended April 30. That compared with an average estimate of a 12 percent increase from six analysts surveyed by Bloomberg. Salesforce has stopped releasing future billings projections.

Revenue from the Salesforce Platform, the system that allows companies to build custom applications to track industry-specific workflows, gained 36 percent to $575 million in the quarter. The marketing and e-commerce business, which rivals Adobe Systems' Experience Cloud, increased 41 percent to $422 million. Adobe bought Magento for $1.68 billion last week in a bid to beat back Salesforce's e-commerce progress. Revenue from Salesforce's flagship tool for managing customer relationships rose 16 percent to $965 million.

Salesforce dominates the market for customer-relationship software. The company had 19.6 percent of the market in 2017, according to industry research firm IDC. Oracle was No. 2 with 7.1 percent, and SAP SE had 6.5 percent. Microsoft and Adobe rounded out the top five.