Samsung Sponors 'Story' Updated Throughout Broadcast
READ THIS NEXT
Tuning into Trends: CTV is an Engagement Cornerstone 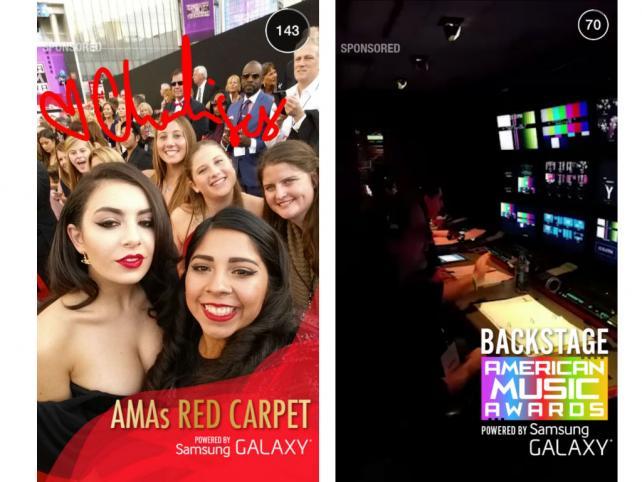 A month after introducing its first ad product, Snapchat rolled out a second format Sunday night, a stream of posts from the American Music Awards that was sponsored by Samsung.

Ad Age reported earlier this month that the mobile messaging app was discussing selling sponsorships of its live-event feeds, called "Our Story" streams.

Snapchat introduced its "Our Story" streams in June as a way to curate users' posts around live events like college football games, awards shows or, earlier this month, Dia de los Muertos, a holiday celebrated in many Latin American countries.

"Our Story" feeds work in some ways like Twitter hashtags, which can organize people's posts around a given event, often a TV broadcast. By the same token, "Our Story" could be considered a "second-screen" complement or TV viewing -- or even an alternative for Snapchat users who aren't watching on TV --and could appeal to TV's brand advertisers more than the messaging service's first ad product.

Snapchat's first ad was fairly traditional: a 20-second video for Universal Pictures' film "Ouija," marked "sponsored" but edited to mimic a fast-cut Snapchat post, that appeared atop Snapchat's section for recent posts. The "Our Story" content stream for the American Music Awards appeared in a "Live" section atop the "My Friends" area of the app. The opening "snap" and certain photos and videos interspersed among user snaps were marked "Powered by Samsung Galaxy" and "sponsored" -- so a bit more akin to surrounding content than the "Ouija" ad, which appeared in isolation, but also interstitial, not unlike TV commercials.