Companies that sell batteries, bottled water and other goods that people rely on to help ride out a storm have an obvious business opportunity during major weather events such as Hurricane Sandy. Online local news organizations can be added to that list.

"Hyperlocal" news sites that focus their coverage on small towns and city neighborhoods are reporting big traffic surges from Sandy, with local residents keen to find out about their towns' storm preparedness Monday and about property damage and when power would be restored on Tuesday, with much of it driven by search. Spikes were reported by corporate news brands and individually owned sites alike. 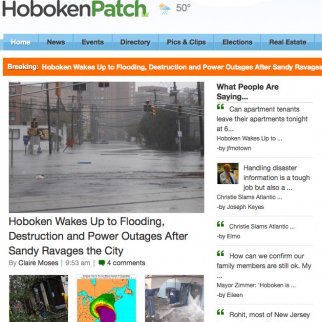 AOL-owned Patch, which operates roughly 860 sites across the country but has high penetrations in New Jersey, New York and Connecticut, reported its highest-ever traffic day Monday -- page views were up 88% from the previous highest day. The Daily Voice, a competing network with 53 sites in New York, Connecticut and Massachusetts, said traffic Monday was two times higher than normal. Sheepshead Bites, a four-year-old independent site covering the Sheepshead Bay neighborhood of Brooklyn, also reported its highest-ever traffic day Monday on its Facebook page. And eight-year-old independent Baristanet, which covers Montclair, Bloomfield and Glen Ridge, N.J., reported traffic Tuesday was on course to be three times higher than the average 8,000 to 9,000 daily visits, notwithstanding the fact that much of Montclair is without power.

The struggles of Patch and other hyperlocal news organizations to tap enough ad revenue to cover the costs of staffing sites with local reporters and editors to write about planning board and school board meetings have been well documented. AOL CEO Tim Armstrong said in July that he expects Patch to book $40 million to $50 million in revenue this year, but that 90% of revenue still comes from local ad deals as opposed to national advertisers. (Patch reportedly lost more than $100 million in 2011.) But major weather events may represent a case where their product is both unique and indispensable. (Disclosure: This reporter worked at Patch from 2008 to 2010.)

'Important information'
"Local is the most important information to consumers. At no time is that more apparent than in local natural disasters," said Patch CEO Jon Brod, who noted that traffic to sites in regions affected by Hurricane Irene last August was up 530% over the eight-day stretch that included the lead up to the storm and its aftermath. "From a traffic and brand building perspective, there's nothing more powerful."

Monday was also Patch's highest search-entry day in its history, Mr. Brod said, with Google queries such as "How long will food last in the fridge if you lose power?" calling up Patch sites. Patch posts with that exact SEO-friendly headline dominate search results for the query, with a story from the Medfield, Mass. site in first position.

And though increased traffic "equals an increased revenue opportunity," Mr. Brod said, Patch isn't courting the categories of advertisers who might be looking to market to people who are weathering a storm. While the Patch sales team had inbound calls from insurance companies, big-box retailers and grocery brands in the wake of Hurricane Irene last year, they haven't actively pursued those categories, he said.

But whether traffic spikes deriving from house-bound residents obsessively searching for the latest localized weather information translate into long-term traffic gains is another question.

"We had this big spike [during Hurricane Irene.] Then we saw traffic drop after the spike, and the new baseline was higher," Mr. Brod said.

ComScore numbers bear out the existence of a Hurricane Irene spike, with Patch sites (including those in unaffected states) seeing 10.6 million visitors in August 2011, up from 8.8 million in July 2011. The number of unique visitors then stayed relatively flat over the next several months, though it's impossible to attribute that to any discrete cause, given that the average Patch site in January of this year was a little over a year old. The sites had 11.9 million visitors this September, according to ComScore.

Though the brand lift afforded to a news site for providing timely and locally relevant storm information is still substantial, it may be diminished now that users can see local content on a multitude of platforms and don't have to go directly to a site. Baristanet's founder and former editor Debbie Galant recalls that covering a tornado-like weather event called a "microburst" in 2006 was a seminal moment for the site in terms of the notice and credibility it gained in Montclair and neighboring communities, but getting attention isn't as easy these days.

"Six years ago, a site like Baristanet was the only place you could go to see pictures of storms in progress," she said. "Now you've got Instagram, Twitter, Facebook and aggregating platforms like CoveritLive, Scribblelive and Storify. The whole flow of media surrounding big events is faster -- a torrent, if you will -- and people are practically drowning in the coverage. So there goes the advantage of being the sole purveyor."