Brands Attached to First-Letter Keywords Will Benefit, but What About Quality of Those Clicks?
READ THIS NEXT
How brands are managing social media while Instagram and Twitter protest with a 'blackout'

NEW YORK (AdAge.com) -- Last week, Google made the biggest change to the look and feel of web search since the advent of the search ad. Rather than wait for a fully-formed search query, Google Instant is now pouring in search results from the first keystroke, bombarding users with information, as well as search advertising.

The service is fast, and for sophisticated users of search, certainly saves time. (Google estimates two to five seconds per query). But marketers are watching the data closely for signs of shifts in search behavior, and how they impact both click-through rates and -- more importantly -- sales. On the line is the nearly $2 billion that advertisers spend on Google search ads each month around the globe. 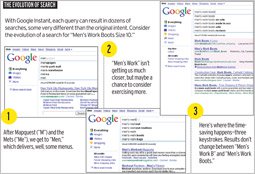 The immediate impact is a lot more search results and a lot more ad impressions. For the past decade, Google has been training users to conduct more specific searches in more natural language and, over time, queries have gotten longer. But now, users are being presented with results from the very first letter. A specific query like "men's work boots size 10" yields dozens of top natural results (Mapquest, Mets, Menupages, Men's Wearhouse, Men's Workouts, etc) as the query is keyed in.

The question is how distracting these results are to the searcher's original intent and how that impacts clicks and conversions. "You usually get to finish your thought," said Kevin Lee, CEO of search-marketing firm Didit. "This has the potential to distract people from what they were looking for and take them in a completely new direction."

It's early to tell how this will change consumer behavior, and marketers and agencies will be poring over the data in the coming weeks for signs of shifts in searches and clicks. But even a tiny shift in percentages could move hundreds of millions in search spending, tightly optimized for the way Google worked until last week.

While marketers will have to adjust their models slightly, Google execs stress the changes impact all users and marketers equally. Google's guiding principle is to build a product for users, and if it benefits users, it will ultimately benefit advertisers. "We didn't build this with advertisers in mind," said head of AdWords marketing Jon Diorio. "If someone is clicking, it's because they're finding what they want and that's delivering economic value to the advertiser. It should be a net positive for advertisers because it is a net positive for users."

Brands attached to first-letter keywords will get a huge number of new impressions, though Google has attempted to mitigate that in the metrics by only counting an "impression" when someone stays on a page for three seconds -- what it calls a "cognitive pause."

Of course more impressions could also result in an increase of clicks, meaning higher search costs for those brands.

Some search pros are concerned about the quality of those clicks and whether there is any real intent behind them. Will new clickers "convert" or buy at the same rate as before? "We are seeing our paid ads appear for clients that really have no relevancy on single-letter terms," said Rob Gardner, senior strategy director at iCrossing, a unit of Hearst. "First, is that single letter truly relevant to the brand and, second, is it going to drive up the cost of those keywords?"

While brand names dominate Google's new alphabet, others are looking at how the changes may impact the cost of so-called "head terms," the typically expensive generic terms such as "flowers," "cars" or "shoes." The cost of those terms may increase if more consumers stop at the first results they see (think: "flowers in Cleveland" becomes just "flowers" because that's when relevant results started pouring in).

"We did run some preliminary data for a dozen marketers and there was a double-digit percentage increase in impressions to general terms," said Bryan Weiner, CEO of digital agency 360i. "I think we're worried about whether this will increase traffic to terms that are more expensive and tend to convert less well and whether that will have a negative impact on marketer returns."

Darren Herman, chief digital officer at Media Kitchen, predicts a steep drop in unique queries as consumers get what they want faster and with fewer terms. This, he predicts, will lead to higher prices for those keywords and more cash in Google's coffers. Marketers have spent years plumbing Google for cheaper, long-tail keywords, as well as misspelled keywords. Both of those strategies, he said, are headed for extinction.

"Seriously, who's going to keep typing when Google's smart predictions are providing highly relevant search suggestions in real time?" he said. Beyond the ads, bigger changes await for those in the business of optimizing natural search, or SEO, as brands attached to letters get a lot more visibility. "The rule of thumb in SEO is the most-linked content tends to do best, and this is probably another reason to focus on that now," said David Armano, senior VP at Edelman Digital. "It's not just keywords, but key-letters, and we have to figure that out."

Google says, so far, consumers are near-unanimous in their enthusiasm, or at least acceptance of the new feature. Mr. Diorio said "only a small percentage of users have decided to opt out." The feature is soon heading to Android phones and ultimately to wherever consumers access Google search.

"This is the new face of search for Google," Mr. Diorio said.