Internet personality Shira Lazar is taking her live web show about digital trends to the video platform that always seemed like the most appropriate home for it: YouTube.

The show, "What's Trending," will also move to a daily schedule from a weekly one and narrow its focus to popular YouTube content and personalities. Episodes will last 20 minutes instead of an hour. The changes are effective today. 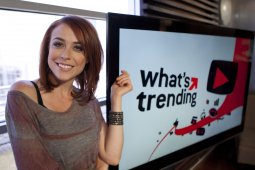 The newly YouTube-centered show is receiving a small amount of funding from YouTube's Next Lab, which encourages innovation on the site, to help ease the financial burden of additional production. Next Lab grants are typically much smaller than the funding YouTube has been handing out as part of its original-programming push.

Ms. Lazar, one of the most recognizable show hosts on the web, has pushed to bring a kind of red-carpet journalism to the digital and tech set. "What's Trending" has been airing live on WhatsTrending.com for the past year or so, then reappearing on the show's YouTube channel in edited shorter clips. The show previously appeared on CBSNews.com, but CBS ended that relationship last September after What's Trending posted a tweet erroneously reporting that Apple co-founder Steve Jobs had died. (He died a month later). The show received an Emmy nomination this year for original interactive TV programming.

In an interview on Sunday, Ms. Lazar said the decision to focus exclusively on YouTube content and the stories behind it was relatively easy. "We kept seeing a lot of our stories and content fall back on YouTube," she said. And with YouTube investing hundreds of millions of dollars into the production and marketing of new original-programming initiatives, she said, its quality content only seemed likely to grow.

"There was a recent Pew study that said more people are getting their news from YouTube than ever before and with more premium content, who's going to be that platform that becomes that discovery tool?" Ms. Lazar said. "We definitely see ourselves as that ."

With the shift to the YouTube platform, "What's Trending" will push even more to bring elements of interactivity to its shows, Ms. Lazar noted, most notably with the use of Google+ Hangouts, Google's video conferencing tool.

Here's a teaser video for the new incarnation of "What's Trending."