Ads Around Snapchat 'Stories' Will Be Optional to View
READ THIS NEXT
Borat makes Amazon debut, and a Quibi postmortem: Friday Wake-Up Call 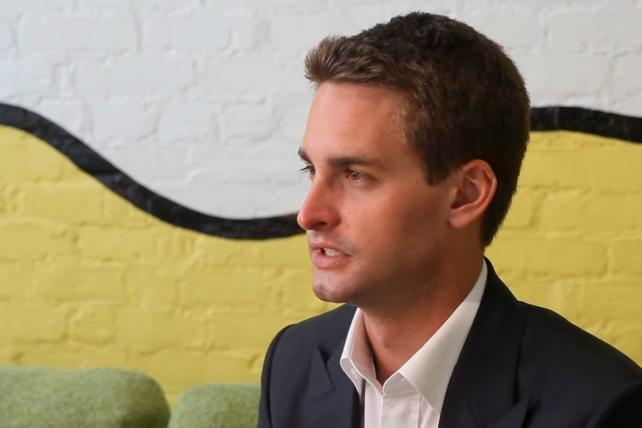 Snapchat, the startup that raised money this year at around a $10 billion valuation without any revenue, will start making money from advertising soon.

"People are going to see the first ads on Snapchat soon," CEO Evan Spiegel said at the Vanity Fair New Establishment Summit in San Francisco yesterday. He said the ads will be around the company's "stories" product, and will be optional to view. "We're cutting through the new technology around ads to the core of it, which is telling a story."

The Los Angeles-based company, which makes a mobile application for sending disappearing photo messages, has attracted investors including Yahoo and Kleiner Perkins Caufield & Byers at a $10 billion valuation this year, people familiar with the matter have said.

A few big brands, including McDonald's and Dove, have experimented with reaching consumers on Snapchat but have done so by sending messages and posting stories -- generating no revenue for Snapchat.

Snapchat has been working on its business model. Chief Operating Officer Emily White was in New York last week for the Advertising Week conference, explaining the service. Earlier this year, the company hired Facebook executive Mike Randall to lead its advertising partnerships.

"Brands are going to have to figure out how to get super creative," Shafqat Islam, the CEO of NewsCred, which makes content-marketing software, said in an interview last week. "Just think about these agencies -- they're used to creating either 30-second spots that cost millions of dollars, or display ads. Now they're going to have to make snaps."

Snapchat is part of an elite group of technology startups that are now commanding valuations in the eleven-digit range, amid a financing boom in Silicon Valley. Other closely held companies that are valued at $10 billion or more include house- sharing app Airbnb Inc. and file-sharing company Dropbox Inc. In June, car-booking app Uber Technologies Inc. raised $1.2 billion at a valuation of $17 billion.

Snapchat has been experiencing fast growth. Users send more than 700 million disappearing "snaps" a day and more than 500 million stories viewed daily, the company has said. It competes with Facebook, which tried to buy Snapchat for $3 billion last year and started its own product to send ephemeral photos and videos after being rebuffed.