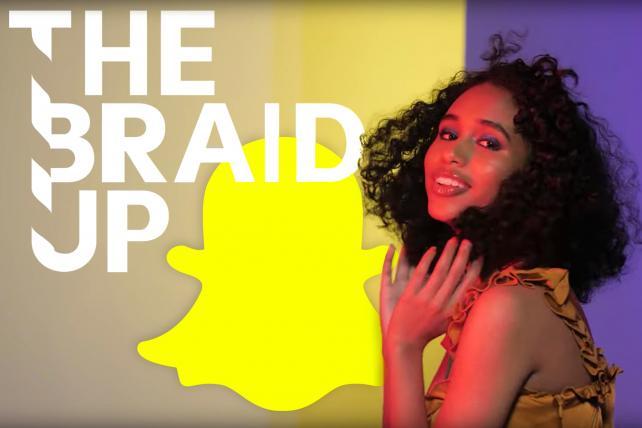 'The Braid Up,' a show created by Hearst for Snapchat.
Credit:

Snapchat has developed a private marketplace for advertisers that could help publishers on the platform sell commercials directly to brands and raise the value of the ad inventory.

On Wednesday, Snapchat said advertisers are now able to book ad space in specific shows and channels created by publishing partners, including Hearst, Vice, BuzzFeed, NBC Universal, ESPN and others, through its self-serve ad platform.

This is Snapchat's version of premium programmatic advertising, known in the industry as a private marketplace, and it melds the automated parts of digital ad buying with the control associated with more manual advertising services. Until now, if brands wanted ads to appear alongside specific publishers' content in Snapchat they had to go through the old-fashioned insertion order method. Brands could already buy Snapchat inventory through the platform's ad tech, but that previously didn't let them select specific publishers, or give publishers control over elements such as pricing.

"We're finally bringing our premium content into self-serve ads," says Peter Sellis, Snapchat's director of product for revenue. "We're moving away from that part of the business that was a long arduous manual process to take advantage of programmatic."

Snapchat has a media section, called Discover, where publishers host daily channels that are like digital magazines, and they also create shows. Snapchat and publishers split revenue on ads.

With the private marketplace, advertisers can order an ad in a show like "The Braid Up," a haircare show produced by Cosmopolitan, and only target a segment of the show's audience, like women age 18 to 24, according to Brian Madden, senior VP of development at Hearst Magazines Digital Media.

"We want to make sure advertisers can align with high quality content," Madden says. "Also, they can layer in a lot of audience data they could not before."

Hearst has three shows on Snapchat and is developing three more, Madden says, adding that they all attract more than 5 million viewers a month. Hearst's Cosmo channel reaches 30 million visitors a month, according to the publisher.

Advertisers have been concerned the type of content that appears on both YouTube and Facebook. Snapchat is trying to take advantage of the industry's unease by offering a higher level of brand safety and control: Discover already operates as a gated community for professional publishers only, and the private marketplace now lets advertisers expressly select the shows they want while still using ad tech.

Snapchat reports second-quarter earnings early next month, and it hopes to show that even though it doesn't reach the same number of people as Facebook or YouTube, it caters to a valuable, highly engaged audience and has a sophisticated ad platform. Snapchat has 191 million daily active users, while Facebook has 1.5 billion.

Snapchat's new private marketplace could help strengthen ad prices, which were hurt by Snapchat's push into automation so far. Snapchat ads cost about $3 to $5 per thousand impressions through the self-serve ads platform, according to people familiar with the service. Prices are expected to rise to closer to $10 for every thousand impressions bought in the private marketplace.

Publishers like the private marketplace because it lets them set their own ad rates, putting a floor on the lowest bid the publisher would be willing to accept, says Paul Wallace, VP of media solutions at Vice Media. Vice was one of the first Snapchat partners to introduce a channel on Discover in 2015.

"This should help us sell a lot more to brands," Wallace says. "The way we look at it is that it allows our advertisers to get in front of this young audience with a lot less friction."

Snapchat will also sell its new six-second, unskippable ads through the private marketplace.

Snapchat developed non-skip ads to help brands concerned by how quickly users advanced past their promos, since people could dismiss them in a split second by tapping the screen to the next piece of content.