It might be early days, but marketers are seeing little return when advertising on Snapchat. They also seem more interested in spending ad dollars on the company's newfound rival: Instagram.

That's according to a series of studies published by RBC Capital Markets in partnership with Ad Age, where some 1,600 marketers were surveyed in an attempt to gauge the pulse of the digital advertising industry. The sobering news underscores the uphill battle Snapchat faces as other platforms like Facebook-owned Instagram and Messenger mimic its features. It also shows Snapchat is a far cry from being in similar company to Google or Facebook, which both received significantly higher marks from marketers.

Between Twitter, Facebook, LinkedIn, Google, Yahoo, AOL and YouTube, Snapchat only outperformed AOL in terms of ROI, scoring a 3.43 out of a possible 8 points, according to the survey (AOL scored a 2.88). Google (6.98) and Facebook (6.72) led the pack, performing nearly twice as better than Snapchat, RBC said.

Marketers cited increased competition from Instagram, difficulty measuring key performance indicators, poor targeting and a decrease in both user engagement and open rates as reasons why their ROI with Snapchat decreased, according to RBC.

When Snapchat parent company Snap went public last month, it noted that its popularity could plateau, adding recent user growth remained relatively flat due to "increased competition both domestically and internationally in 2016, as many of our competitors launched products with similar functionality to ours." 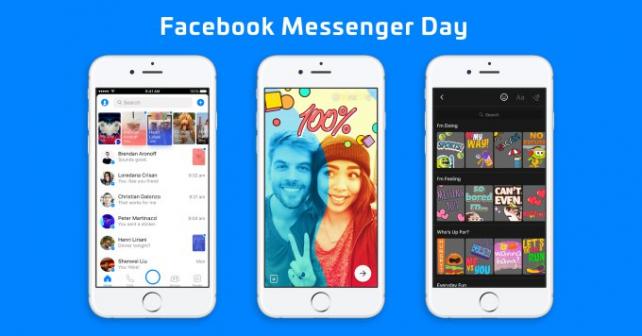 A snapshot of Facebook's Messenger Day

Much of that increased competition is coming from Facebook, which recently launched Messenger Day.

Messenger Day is strikingly similar to Snapchat, but already has a user base north of 1 billion. Instagram, meanwhile, has roughly 300 million daily active users, or almost two times that of Snapchat's 160 million .

According to market research firm eMarketer, about 70 million Americans will use Snapchat in 2017, up from its June prediction of 67 million users.

RBC surveyed a wide range of marketers, including those who manage more than $500 million in ad spend to those that manage several hundred thousand dollars. A total of 119 marketers who were surveyed said they plan to significantly or modestly increase their ad spend with Snapchat, RBC said.

About 450 of those surveyed said they plan to significantly or modestly increase their ad budget with Google, while 461 made similar remarks about Facebook.

Snapchat reported losses of $515 million last year, up from $373 million in 2015. The company did not immediately respond for comment.