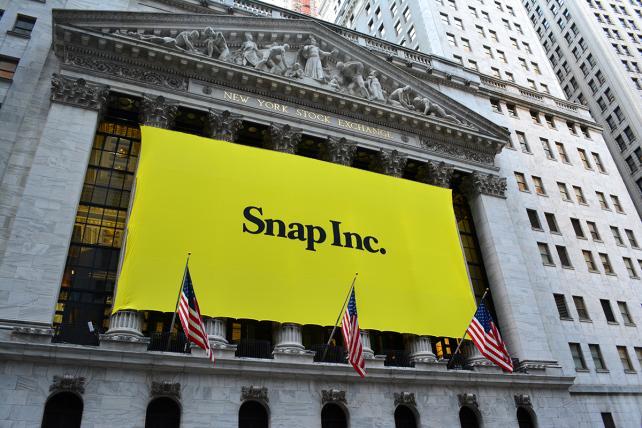 It would be understandable if Snap Inc. is feeling a little jittery as it closes the book on its first quarter as a public company today. The owner of the Snapchat messaging and media app has to show strong ad sales and a growing user base when it makes its report after the close of business. And, to that effect, it needs a plan to beat Facebook's relentless copying.

"The thing that everyone in the industry is grappling with is: Can Snapchat successfully get ahead of Facebook copying them?" said one ad agency exec, speaking on condition of anonymity.

Here's what the ad world (and Wall Street) are looking for today:

But Snapchat is selling advertisers on the value of its particular audience more than its size. A recent report from App Annie said half of Snapchat's younger audience can't be reached on Instagram.

But some buyers are starting to view that as euphemism for "We're not going to get much bigger."

"You start to worry if they start to beat that drum," said one agency exec, speaking on condition of anonymity to avoid antognizing Snapchat. The executive compared that positioning to digital video publishers whose reach still can't match TV. "That's what all the publishers with at the NewFronts say: 'Hey, we have a unique audience.'"

Imitation story
"Anything Snapchat puts out is getting copied by Facebook," a social media agency exec said, also speaking on condition of anonymity. Snapchat has become even more secretive, and justifiably paranoid, because every new feature and product is taken by Facebook.

In April, Facebook introduced the Stories format pioneed by Snapchat into its main app, putting the camera at the center of the social network on mobile. It had already cloned Stories for Instagram.

Facebook has also rolled out an augmented reality platform, which opens its camera up to developers to build digitally animated experiences into the app. Snapchat basically invented augmented reality in social media by creating "lenses" that alter selfies, but its platform is closed, with Snapchat building all the features.

Ad tech
This is one arena where Snapchat made progress last quarter. The company got more sophisticated with its ad platform. It developed retargeting capabilities, so when brands run an ad or sponsored lens, they can follow up with later messages to the same people who viewed the original ads.

It improved its measurement, with services like "snap to store," which can measure store visits from people who viewed an ad. Snapchat also said it would offer the ability to buy video ads based on industry standards of viewability.

Brands have been demanding such strict criteria for counting views, and threatening to pull their money from any platforms that don't meet standards.

Lastly, Snapchat fully launched its self-serve platform in April, which allows any agency or brand to handle its own buying of ads on the platform. Any early traction for these initiatives would help give ad buyers confidence.

Original content
Advertisers and investors will be looking closely at Snapchat's programming plans to compete with Twitter, which has a new 24-hour video streaming strategy, and Facebook with its live video and connected TV ambitions.

Snapchat had a big presence at the NewFronts earlier this month, with Hearst, Vice, Condé Nast, Time Inc., and most others showing plans to create for the platform.

A lot of attention will be paid to how Snapchat strikes deals going forward. It splits ad revenue with most of the media partners, but is trying to shift those deals into a licensing model, and has a few so far.

"Any revenue Snapchat gives to publishers is lower margin revenue than what it runs on its own properties," said an ad tech exec who works closely with Snapchat partners.

"Snapchat needs to start thinking about what's next," said an ad agency executive, who works closely with brands that advertise on the app. "Lenses are great. Group texting is great. But it has to think about not losing status to upcoming platform that are doing completely new things."