Why Snapchat's New Search Bar Is a Welcome Sign for Brands 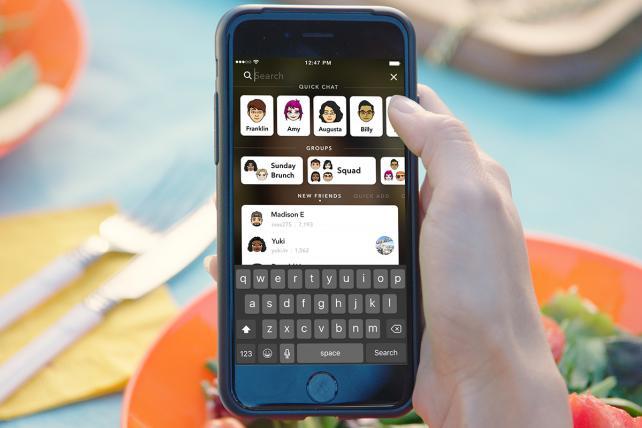 Snapchat has given brands and publishers new hope that they could get discovered.

On Thursday, the messaging and media app revamped the design of its search, opening the possibility that brands and publishers will get more exposure for their Snapchat videos.

The search changes are mostly cosmetic at this point, and they don't dramatically alter how people discover new accounts. However, it offers a more visual search design that appears readymade for brands and publishers to be able to promote themselves, perhaps eventually paying to find larger audiences.

Snapchat unveiled the search changes on select Google Android phones, but said it would soon roll out more broadly.

The new search page borrows from Asian messaging apps like WeChat out of China and Line from Japan, according to Jason Stein, CEO of social agency Laundry Service.

"This is just the beginning for them rethinking ways to present content from people, brands and media companies," Mr. Stein said. "My guess is they're taking a cue from WeChat. And if you copy the platform, the business model is likely to follow."

Mr. Stein sees the search page as a place where brands and publishers could pay for higher visibility of their content. It could become a main hub inside the app for people to discover any new features and type of content.

"It can become a portal to many things," Mr. Stein said, adding that's how the Asian messaging apps evolved to take over the mobile web for their most devoted followings.

Until now, Snapchat has made the app intentionally private and personal, and brands have found it inhospitable at times.

"When it first launched the app, Snapchat was hard to navigate around, hard to learn the gestures," said Simon Law, chief strategy officer at Possible, a digital agency owned by WPP. "They're beginning to inject features that make it easier for broader audiences to discover stuff."

Snapchat has been taking baby steps, warming to brands that want to jump into the platform.

In 2015, it started inviting publishers like BuzzFeed, Vice and Cosmopolitan into a media section it called Discover, where they create daily editions for readers.

Around the same time, it introduced Snapcodes, which brands and publishers could plaster online and in the real world, for people to scan and easily find their Snapchat accounts.

Instagram recently launched a section called Stories that mimics Snapchat, and it is serving the same style of video ad that Snapchat developed. Part of its appeal for brands and creators is the fact that their accounts are easy to promote, and they are given plenty of data to measure their success.

Snapchat is planning to go public, which would place more commercial demands on the company, and encouraging brands to invest in the platform is one way to get them to buy more paid ads, too.

"It can be argued that brands aren't your friends," said Edie Greaves, Possible's senior strategist. "But at the same time you can't have all this free content, or at least it won't be very good. It's better to see brands as having utility."