Snapchat's Mysterious 'Snap to Unlock' Ads Start to Pop Up 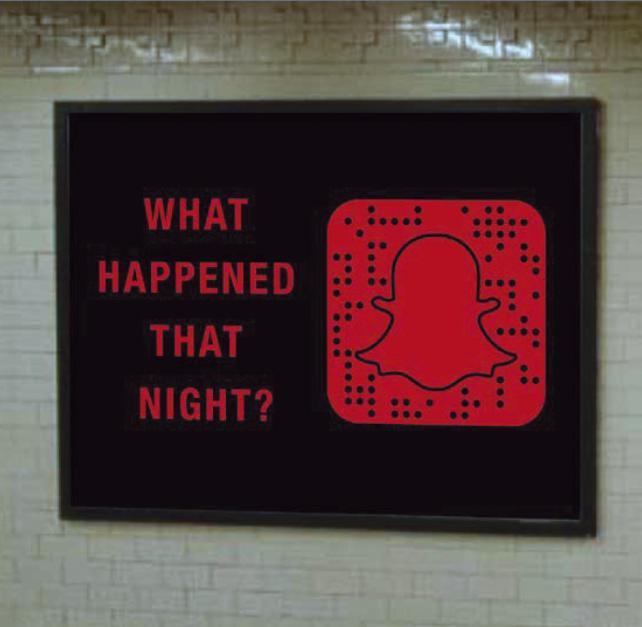 An ad for 'The Girl on the Train.'
Credit: NBC Universal

Snapchat marketing codes are starting to appear in the wild, inviting people to scan them with promises of promotional add-ons inside the app.

These are Snapchat's new twist on old QR codes, which had a brief flirtation with relevance about 5 years ago. The QR code, it's worth remembering, was a digital marker that consumers could capture with their smartphones, directing them to special offers and other mobile marketing promotions.

Now, Snapchat has turned the concept into an ad format called Snap to Unlock. Brands put the codes, which look like Snapchat logos, on billboards, in stores or on products for people to scan.

Universal Pictures, a longtime Snapchat advertiser, is among the first to test the Snap code marketing for its new movie "The Girl On the Train." Mysterious billboards will be showing up around subways in New York and Washington, D.C., and in parts of Los Angeles, according to Doug Neil, exec VP of digital marketing at NBC Universal.

Mr. Neil admitted QR codes were a flop, but said they were at a disadvantage because consumers had to scan them with different types of apps, all of which needed to be downloaded for the sole purpose of QR code-scanning. Snapchat is already downloaded and in frequent use on many people's phones.

All Snapchat users already have a Snapcode of their own that friends can scan to make it easier to follow each other.

"Snapchat is a little more ubiquitous and kids do love the discovery aspect of the Snapcode," Mr. Neil said. "So this could be a bigger play there."

Snapcodes have also appeared in marketing campaigns from brands like Sprite, which last year put them on cans in Brazil, prompting users to scan them to find special accounts.

Now Snapchat is making Snap to Unlock ads a more formal ad offering. Advertisers said they expect them to show up more for the holiday marketing push.

Fashion brands, retailers and movies studios are natural marketers for the Snapcodes, according to Chris Tuff, director of business development at 22squared.

"You could get a code on your receipt or it could be on a sign at the store," Mr. Tuff said. "And you could get an exclusive filter for 24 hours, so there's exclusivity and the ability to share it. That makes sense for certain companies."

"The Girl On the Train" will just have cryptic billboards with the Snapcode and the words: "What happened that night."

A person would have to know Snapchat and how it works to even make sense of the billboard. The code takes users to special geofilters.

In the future, the codes could lead to more sophisticated experiences like animated lenses, the popular Snapchat feature that adds special effects to video selfies.

Mr. Neil would not say how much the Snap to Unlock feature cost advertisers.

While they seem frivolous, the snapcodes could become useful to marketers measuring how well Snapchat campaigns perform, especially if they lead to offers that people redeem in stores, said Noah Mallin, head of social at MEC North America.

"QR codes are one of those things everyone laughs about but Snapchat found an interesting way to reinvent them," Mr. Mallin said. "They're taking a real-world interaction and making it actionable on the platform."