Moving Away From Clicks And Toward Social Actions

Pioneering social-ad company Appssavvy has raised $7.1 million to build new technology around the idea that the future of online advertising lies in monetizing actions such as voting in a poll, checking into a location or leaving a comment.

Founded in 2008, Appssavvy started as a middleman, pairing advertisers and agencies with social-game developers such as Zynga and Rockyou. But it has switched course over the past year, abandoning banner ads and focusing on new technology it calls "Adtivity," which targets ads attached to activities like updating status, earning virtual goods, completing a level or sending a message within a game. AOL Ventures joined existing investors, including True Ventures and the New York Times Co., to bring the total amount raised to $10.2 million. 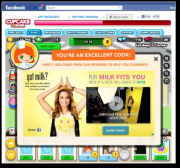 Appssavvy delivering an ad on the game Cupcake Corner on Facebook.
CEO and co-founder Chris Cunningham says the technology is now used by 74 publishers, including Disney and social-gaming companies CrowdStar, OMGPOP and Arkadium. Brand advertisers including American Express, Chase and Coca-Cola have tried campaigns using the platform.

New York-based Appssavvy has about 55 employees and offices in Chicago, San Francisco and Los Angeles. Mr. Cunningham said the funding will be put toward structuring the engineering team and sales organization and investing in web and mobile technologies.

As consumer behavior changes, so is the architecture of web advertising. "The future of how publishers are building games and building communities is not around page views and impressions," said Mr. Cunningham.

As more sites focus on social gaming, group buying and mobile, the traditional page view metric is becoming obsolete. Instead of targeting a page load, Adtivity delivers an ad when an activity is initiated.

For example, Mr. Cunningham pointed to an HP ad designed for the mobile app Audibly, an audiobooks delivery service. When users elect to write a review of a book, an ad for an HP TouchSmart 520t lingers on the screen. They then have the option to learn more about the product or exit the ad and continue their actions with the app.