Publishers, Weary of the Marketing Push, Mostly Ignore Them
READ THIS NEXT
YouTube CEO says the platform is ‘valuable’ for teens’ mental health

Three weeks into the world's most famous football tournament, you'd be forgiven for thinking those charts, maps and infographics you've been seeing everywhere were some kind of symptom of your World Cup fever.

They are actually the result of a strategy shift by marketing teams in the social-media-measurement space, which have been investing more heavily in designers and content that can show off their products in a visual way.

The result is an explosion of infographics, maps, charts and interactive visualizations that comes even as some publishers are growing weary of visualization pitches from marketers.

"I thought [infographics] were kind of over a year ago," said Todd Wasserman, a business editor at Mashable. "But they're still pushing them like there's no tomorrow." 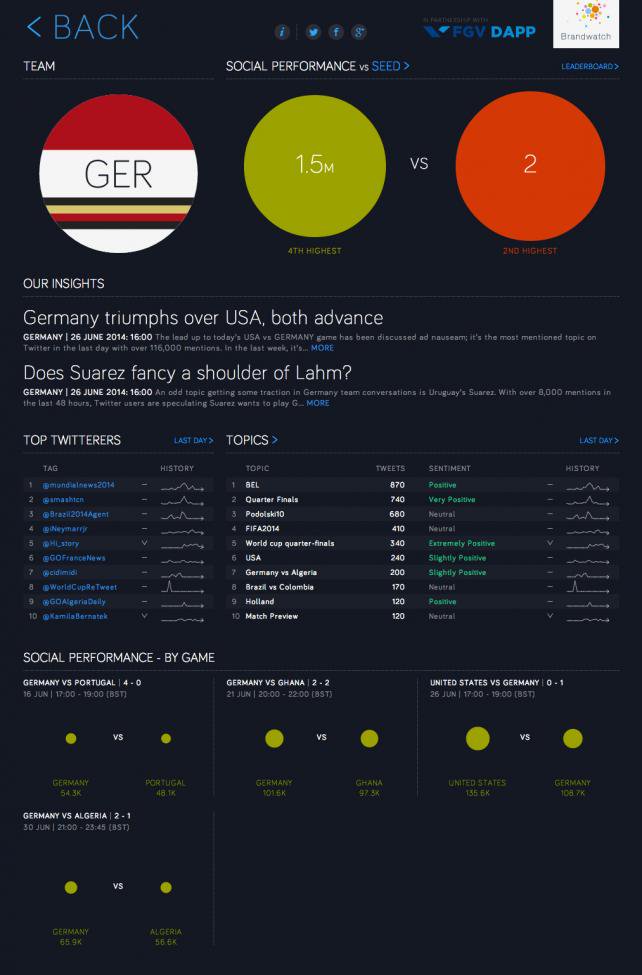 During this year's World Cup, social-media-measurement firms have been especially busy, producing a wide variety of visual content. For example, the data measurement and analysis company Crimson Hexagon has already produced a big, splashy look at how much marketers are spending at the World Cup (which it produced in partnership with digital-marketing platform Offerpop); a quick-hit visual breakdown of match predictions that a staffer whipped up in three hours; and some smaller graphs embedded in a larger blog post, also produced by a Crimson Hexagon staff member.

"We are pumping out a lot of World Cup analysis," said Elizabeth Breese, a senior content and marketing strategist at Crimson Hexagon.

Crimson Hexagon is not alone. Adobe published a series of charts and infographics about sentiment and brands on its own microsite, the Adobe Digital Index; the social-media-monitoring firm Tracx is building an infographic report tracking the social-media gains of the top World Cup and FIFA sponsors; Sysomos built an interactive dashboard that shows real-time global Twitter activity related to the World Cup; Brandwatch, in partnership with the Brazilian think tank FGV, built an interactive visualization identifying a team's most influential fans on Twitter that's updated multiple times a day.

Marketing and PR staff at these firms all told Ad Age their visualizations are designed to build brand awareness, and some are trying harder than others to garner earned media attention with them.

Yet as this practice has become more popular, publishers' skepticism of infographics and other visualizations has grown.

"It used to be you could source a bunch of facts from Wikipedia, put 'em in some graphics, and it would make the front page of Digg," said Lee Sherman, the chief content officer of infographics marketplace Visual.ly.

That's not quite the case anymore. "The bar has risen in terms of the quality you have to produce," Sherman said.

"I personally haven't published one all year," Wasserman said. "I'm not a huge fan since they're often so nakedly self-serving."

In response, some firms are dedicating more resources and more energy to making more sophisticated visual content. Chas Cooper, executive director of marketing at Meltwater, a company that offers online media-monitoring tools, said in an email that this year his company plans to spend more than four times the amount it spent creating visual content the year before.

Part of that included hiring the firm's first full-time designer. "Visual content is strategically important for all of our branding efforts," Mr. Cooper said.

It's tough to calculate exactly how much more visual content these firms are putting out, but evidence of an increase is strewn across editors' inboxes. A search through Mr. Wasserman's inbox reveals that the number of infographics he's been pitched this month is up more than 30% from the same period last year. Other publications have noticed an uptick as well. "I've definitely seen a surge," said Patrick Coffee, a senior editor at Mediabistro.

As the web continues to grow more social and more visual, this trend looks likely to continue. Yet what's missing from this shift, so far at least, is a measurement of how effective visualizations are at getting a brand's name out there.
"We haven't started measuring the impact on brand awareness in a way that I can quantify easily for you," Mr. Cooper wrote.